Indigenist Bruno Pereira, who has disappeared since June 5, graduated from the Fundação Nacional do Índio (Funai) in 2019. Pursued by the top of the body, he realized that the only way to make a difference was to act directly in the Indigenous Land (TI) Vale from Javari.

Ignored by the federal government, the indigenous people invited the server to face a criminal network, ranging from illegal fishing to drug trafficking. The proliferation of illegalities pushes indigenous and riverine people to opposite sides of a conflict that has lasted at least 20 years.

The owners of the territory were forced to defend themselves by their own means. “We were carrying out the inspection that would be the duty of the State. We are doing this work and will continue to do so”, says an anonymous leader.

To Brazil de facto, the indigenous man shared what the permanent alert routine of Pereira and the surveillance team was like, days before his disappearance last Sunday (5). “We decided not to move away from each other even to go to the bathroom. There was little care.”

Illegal fishing is an old problem

It is not today that the Vale do Javari, one of the last remnants of isolated peoples in the world, has its natural resources plundered. “The fishermen never accepted the demarcation of the territory, which was approved in 2001”, says Armando Soares, head of Funai’s decentralized unit in Vale do Javari between 2003 and 2005, and a friend of Bruno Pereira.

“I have already seized more than a ton of dried arapaima. We heard the noise of the invaders, we started shooting in the air and they all dropped huge backpacks full of salted arapaima meat”, recalls the 72-year-old indigenist.

At that time, the bifurcation of the Ituí and Itaquaí rivers, where Pereira and the journalist Dom Phillips disappeared, was considered a “warehouse” for fishermen and poachers. Extensively extracted, natural resources began to be lacking for the indigenous people.

“And that’s when the atmosphere of aggression between the two sides began. These riverside dwellers, financed by Colombians and Peruvians, fished, hunted, took wood in the indigenous land and took these products to buyers in the cities of the region”.

:: From trafficking to slave labor: a network of illegal activities drives the devastation of the Amazon ::

Like Bruno, Soares was in danger when facing the situation. The difference was the presence of support from the federal government, which was much more constant at the time. “The only reason I didn’t die was because the Federal Police and the Army gave me strong protection,” says the former head of Funai in Vale do Javari.

Like Soares, geographer and professor Aiala Couto, from the State University of Pará (UEPA) says that the situation has worsened in the last five years, due to the arrival of factions linked to drug trafficking.

Criminal organizations transport cocaine to Brazil using the same routes as illegal fishermen and poachers. The most influential factor, according to the researcher, was the weakening of environmental policies, especially in the administration of Jair Bolsonaro (PL).

“Incentives for mining and the legal exploitation of wood strengthened not only the removal of natural resources, but also the organized crime of drug trafficking,” says Couto. “The factions begin to connect with the environmental crime that was already taking place there. And it is obvious that this is the responsibility of the federal government.”

The fear routine of forest defenders

On the day of the disappearance, Pereira and Philipps slept at the Canoão indigenous surveillance base, near Lake Jaburu, where daily life was tense. “We always work two-man shifts, while the rest rest,” said the indigenous man, a member of the monitoring team.

As per the leadership, they were succeeding in intimidating the invaders. At the cost, however, of a growing sense of insecurity. “Bruno said he was going to look for more resources so that he could increase the team from 13 to 20 or more men. That’s the only way we could be safer. One protects the other”, he said.

At the surveillance base, journalist Dom Phillips interviewed the protectors of the territory. “We talked about what we expected from the State and how we were reacting against the State, against this devastation. And how we were resisting the invasion of fishermen and hunters in our region”, he described.

The co-option of riverine people by trafficking

In the Vale do Javari TI, illegally harvested wood is not used to build houses in the communities. The fish and animals removed from the protected area did not find food on the riverside people’s plate. In fact, the region is the scene of a massive scheme to extract natural resources, marketed at high prices and driven by traffickers.

“Drug trafficking is increasingly related to environmental crimes”, says Aiala Couto, from UEPA. “These are criminal activities that connect and complement each other. Not least because the same routes used for trafficking cocaine are used to transport wood, which is exported to the European market.”

When the federal government relinquishes territorial control of the region, environmental crime becomes an opportunity for criminal factions to diversify their operations. 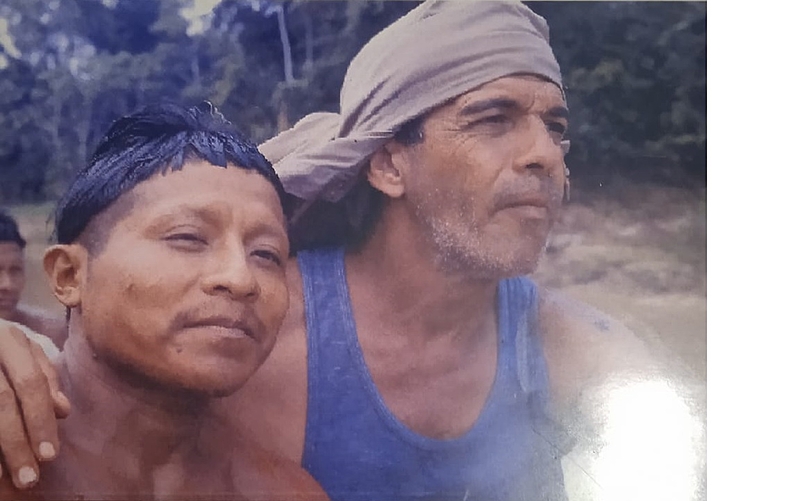 Soares believes that some riverside dwellers, co-opted by the economic power of crime, are involved in the logistics of transporting drugs and illegally extracting natural resources, using the region’s knowledge to evade inspections.

“They invade the indigenous land, fish and hunt and take turtle eggs. And their base is the communities. One of them is very frequented by meat traffickers. And from there they set up expeditions and had huge paths that took a very long turn. to enter the indigenous land. Or they entered the river and passed the Funai base in silence, at dawn”, describes Armando Soares.

Taking advantage of the vastness of the Vale do Javari TI, the second largest in Brazil, fishermen and hunters worked where inspection did not reach. “They made large encampments, cleaned the ground, set up tents, made clotheslines and hung plastic bags with baby fish that they would slowly carry out of the IT through these forest paths”, says the federal official.

:: How illegal mining dominated the Madeira River and why it is so difficult to put an end to it ::

By allowing the illegal extraction of natural resources to grow, the federal government opened the doors of the Amazon to the presence of factions. There are local groups, such as the Família do Norte (FDN) in Manaus and the Comando Classe A, in Altamira (PA). The significant influence of the PCC has been overcome by the Comando Vermelho, mainly in the interior of the Amazon.

Aiala Couto attests that the main trafficking route in the Amazon today is the Solimões River, where the drugs travel to the northeastern coast before being taken abroad. The Javari River, although less important for traffickers, has gained logistical relevance.

“In Javari, there is a local criminal group that emerged from the dissent of the FDN, called Os Crias. So you have prospectors, loggers and drug traffickers in an area of ​​dispute. a conflict zone for indigenous people, riverine people and civil servants”, explains Couto.

“Funai doesn’t even protect themselves”

Without investments and with the growth of environmental crime in unprecedented proportions, Funai employees are unable to protect the territory. The indigenous leadership who works with Bruno says the policing provided by the indigenous agency is “practically useless.” Therefore, the solution was to carry out the inspection on our own.

“Funai says it’s protecting isolated Indians. They don’t even protect themselves. The police force that exists at the (Funai) bases is to protect the base employee, not the territory. They don’t even walk 800 meters away from that blessed base. The Indians give them protection”.

The leadership adds: “Funai prevents us from carrying out our own inspection and monitoring of the territory. They prevent us from protecting our own home. They should be allied with the indigenous people”.

:: Politicians and businessmen encourage acts against the PF operation that prohibits illegal mining in Pará ::

An example of public servants’ vulnerability is the death, three years ago, of Funai employee Maxciel Pereira dos Santos. In the Ethnoenvironmental Protection Front he worked in operations against mining, illegal logging, as well as illegal hunting and fishing.

At the age of 34, Santos was shot in the back of the head while riding a motorcycle with his wife. The case was never solved, and colleagues are convinced that he was killed in retaliation for fighting the invaders.

Before the crime, the base where he worked had already suffered at least three shootings since 2018.

“In Respect to Them”

In recent days, indigenous guards were forced to momentarily interrupt inspections. They focus their efforts on finding Dom Philips and Bruno Araújo. But almost a week after the disappearance, say they have begun to lose hope.

“We gathered 40 or 50 men in search of a person [Bruno Pereira] who has always fought for our indigenous people, for the well-being of the indigenous people. and a foreigner [Dom Phillips] that tried to show the reality of Vale do Javari. So, out of respect for them, we have to do this mobilization”, says Bruno’s ally.