“Will our blood serve to find our grandchildren?” With this question, a new chapter was opened in the search for those who disappeared from the Argentine military dictatorship. A key question that opened a path of union between science and human rights to fill the violent gaps left by the regime in thousands of families.

The last Argentine dictatorship (1976 to 1983) was the most violent the country went through. The period, called by the military as the National Reorganization Process, was marked by the political persecution of progressive militants, teachers, trade unionists and any profile that fit the “subversive” criterion ruled by the regime. It left a balance of 30,000 missing, including babies kidnapped when they were still small or, in the case of pregnant kidnapped women, directly born in captivity.

Many of these babies were appropriated by families close to the Army. Others were abandoned or murdered. The grandmothers of these babies undertook an incessant search for the whereabouts of their grandchildren, in the historic rounds in Plaza de Mayo, in front of the Casa Rosada, seat of government, in Buenos Aires.

In the midst of the media siege and the repressive climate, these women, grandmothers and mothers of the disappeared, identified themselves with white scarves wrapped around their heads and, later, would form the most emblematic social organizations for human rights in Argentina: the Mothers of Plaza de Mayo. and the Grandmothers of the Plaza de Mayo.

From a news report about the hypothesis that genetics could be a way to find these grandchildren, with the hope that they were alive, these grandmothers went after more concrete answers. Thus, in the 1980s, they contacted geneticist Victor Penchaszadeh, who, after being politically persecuted by the regime and after escaping a kidnapping in his laboratory in Buenos Aires, went into exile in the United States. 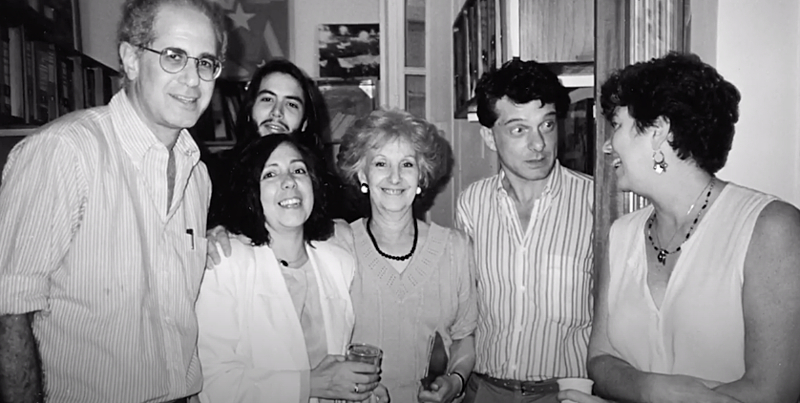 Geneticist Victor Penchaszadeh, on the left, and the president of Avós da Praça de Mayo, Estela de Carlotto, in the middle. / File

Unaware of the potential of this inaugurated path, the conviction of the grandmothers and the scientists involved in the search for answers gave rise to what, years later, would become the National Genetic Data Bank (BNDG).

This month, the Bank completes 35 years of history. A pioneering experience in the region, the work of the bank and the institutions linked to it made it possible to return, to date, 130 grandchildren stolen during the dictatorship. Javier Matías Darroux Mijalchuk was the last, on June 13, 2019.

It is estimated that about 500 babies were kidnapped by the military since before the coup was consummated, and already in repressive years, between 1974 and 1983.

“He looked for me. What we always say to Grandmothers has been fulfilled: they will look for us, just as we are looking for them”, announced an emotional Carlotto Estela, next to her 36-year-old grandson, Ignacio Montoya – or Guido , a name chosen by his mother before the kidnapping. On the occasion, Estela, president of the Associação das Avós da Praça de Maio, held a press conference to announce the restitution.

“He sought the association and, today, they told me: ‘it is your grandson in 99.99999%'”, he said. One of the most awaited restitutions, given the visibility of Estela’s militancy, her meeting with her grandson, in 2014, was made possible thanks to scientific advances driven by her own grandmothers.

The level of precision announced by Estela, by genetic association, has been perfected over years of research. In the early 1980s, when Victor Penchaszadeh was sought out by the Grandmothers of Plaza de Mayo, the scenario was quite different. “It was not yet possible to fractionate DNA to study it in pieces. This was only possible in the mid-1980s, when an English scientist invented a way to separate DNA fragments”, the geneticist tells the Brazil de facto. “Until then, the study was done by blood group.”

Thus, with the new technique, the challenge posed was to associate genetic data between grandparents and grandchildren. The path taken by the working group formed by several scientists who joined the endeavor was, then, to adapt the paternity index having as reference the genetic information of the grandmothers. One of the members of this group was geneticist Mary-Claire King, recognized for identifying the similarity between human and chimpanzee genes and the genes responsible for breast cancer.

The studies were concluded months later, giving rise, in 1984, to the “abuelidad” index (from the Spanish word “abuela”; “grandmother” in Portuguese). The statistical data generated from this pioneering experience enabled a new and important way of identifying missing persons and the advancement of laboratories specialized in forensic genetics in Argentina.

Based on Victor’s recommendation, an institution was formed to concentrate, synthesize and archive the genetic samples collected between families who seek and people who doubt their identity. Thus, in 1987, a law was enacted establishing the creation and operation of the National Genetic Data Bank in the search for missing persons between 1974 and 1983.

Paths of search and encounter

Before the first statistical data from genetic studies, families were able to restore grandchildren from other information, such as photos and digital data, in the case of babies kidnapped some time after birth. When these possibilities were exhausted, science began to play a fundamental role in the search for the Grandmothers. However, this path has always been built, and continues to be, in conjunction with State policies and human rights organizations.

In the recently released book commemorating the Bank’s 35th anniversary, the institution’s director, Mariana Herrera, draws attention to the quick response to crimes committed during the dictatorship shortly after democracy was restored in 1983. shaped the history and evolution of forensic genetics in the world”, he writes. “Studies of histocompatibility antigens to obtain the ‘abuelidad’ index and studies of mitochondrial DNA for cases of complex affiliations in the absence of parents came to light through the work of restitution of grandchildren in Argentina.”

With the advancement of genetic studies, it was possible to improve and improve the results of genetic compatibility. Responsible for the BNDG laboratory, Nicolás Furman, PhD in biology, explains to the Brazil de facto that, at the beginning, studies were based on biochemical markers. “In the 1990s, forensic genetics gained another dimension and other markers were incorporated, such as the Autosomal Short Time Repeat (STR), which are short repeats that occur in parts of the genomes; and also the mitochondrial DNA. With more markers, the statistics generated are much higher and the results much more precise”, explains the biologist.

LEARN MORE: Construction of US military base in Argentine Patagonia generates population repudiation

Today, he points out, one of the main challenges of the BNDG is precisely to expand the markers and ensure that no grandson escapes the analysis of compatibility with the bank’s data. A well-known case in this regard is that of the 98th grandson returned, Guillermo Amarilla, in 2009. Born during the dictatorship and with doubts about his real identity, he underwent a genetic test at the Bank in 2008. The result was negative. It was from a witness, in the judicial process of Campo de Mayo, one of the clandestine centers of the dictatorship, that it was learned that Marcela Esther Molfino had been kidnapped pregnant by the military.

“With this complaint, we incorporated this family case, there was the inclusion (genetic compatibility) of Guillermo in the family group and, thus, we identified him”, says Nicolás. “Many families were totally exterminated during the dictatorship, or practically no family was left, as many families go through their pain process without wanting to do anything else about it”. He says he had a similar case in his own family. “My father lived in hiding, my parents had exiled family members, disappeared friends. But many stories my parents told about the dictatorship were information I had when I was 38 years old.”

Guillermo Amarilla’s restitution is an illustrative case on the effectiveness of responses to crimes against humanity involving various spheres of society and the State. It involves the process of justice, of construction and reconstruction of truth and memory – which, far from being a static portrait of the past, is something alive and present, something that the militancy of the Mothers and Grandmothers of Praça de Maio concretize all the time – , science, social organizations, public policies.

Together with the grandmothers’ association, another institution, the National Commission for the Right to Identity (Conadi), plays a fundamental role in campaigns to raise awareness of people born between 1974 and 1983 who doubt their identity. Linked to the State, Conadi also forwards cases, when necessary, to the Genetic Database for carrying out genetic investigations.

There are about 1,200 samples studied by the BNDG per year. With the pandemic, the number was reduced, but this year, the pace of work already points to normalizing the Bank’s usual routine and, thus, optimizing searches.

The restitution of a grandchild, someone whose history was hidden by their appropriators, means, finally, the recovery of their identity. However, the concept encompasses a much broader and more complex plan regarding its conformation, in addition to biological information.

“Identity is something much broader than genetic identity, which are kinship ties”, points out Penchaszadeh. “Identity has non-genetic components such as culture, education, social, environmental, and socioeconomic factors. Identity, in itself, is a process”, he points out.

Thus, the affective relationship, for example, is also a construction after restitution. It is common to report recovered grandchildren and granddaughters about how they relate to the grandmothers or relatives who sought them out, and gradually discover affinities.

“The first refunds were with children, but the years go by and these grandchildren are now adults”, he says. “Many people even reject the idea of ​​doing genetic analysis even with a lot of data indicating that they were possibly suitable babies.” Regarding these cases, the legislation has advanced and establishes that, in cases of crimes against humanity, there is hierarchically a responsibility that overrides the right to privacy and, therefore, carrying out the genetic analysis is no longer an individual decision, a once the case is brought to court.

As an example of a pioneering experience in forensic genetics, the BNDG has already carried out training and exchanges with countries in the region that have also lived through dictatorships or are actively searching for missing persons by the State, such as Colombia, Peru and, more recently, El Salvador. The geneticist Victor Penchaszadeh himself helped directly in identification processes through forensic genetics in El Salvador and Guatemala. In addition, together with the Argentine forensic anthropology team, he works in countries such as Mexico in the search for political disappeared.

“I think that science can only be valid if it is supported by human rights,” says Penchaszadeh. “No scientific research that is not based on human dignity and human rights can be valid.”