Cuban President Miguel Díaz Canel presented a containment plan for the country’s energy crisis. Of the total of 20 plants, only seven are operating. Across the island, scheduled blackouts of up to 12 hours per day apply. The reason would be the difficulty of importing fossil fuels due to the economic blockade.

“When there are no peaks, the electrical demand is basically satisfied with the generation of energy from the country’s thermoelectric plants, which have the capacity to meet demand when there is no high consumption, since they use national oil production”, said the head of State.

The peaks of consumption would be precisely at lunch and dinner times. Since the 2000s, the Cuban government has promoted the use of electric stoves and pots to reduce gas consumption in the country, which is why most Cuban homes use the electricity grid to perform almost all household chores.

“National oil is the fuel we have. Given international market prices, this is the only solution the country has to generate electricity,” stated the Minister of Mines and Energy of Cuba, Liván Arronte Cruz.

Watch: BdF Explains | What are the impacts of the US economic blockade against Cuba

Cuban fuel is of the heavy type, loaded with sulfur, which causes a faster deterioration of the structures of the plants. Due to the difficulty in carrying out maintenance, one of the main thermoelectric units in the country, Lidio Ramón Pérez “Felton”, in Holguín, capable of producing 480 megawatts of energy, is out of order.

Cruz assumed that the government decided to paralyze part of the industry to have energy generation available to the population.

The Minister of Mines and Energy also assured that there is a plan to produce 683 megawatts by 2023 and that the two largest plants in the country should be fully operational by the beginning of the summer season, in July.

For that, Cuba is negotiating with allied countries the availability of up to four new blocks of energy generation, even if this is not “an investment that we can carry out immediately”, explained Diaz-Canel. 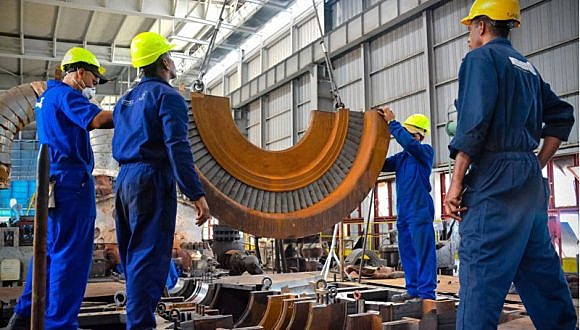 The government also highlighted the importance of the consumer economy. “We have 4 million homes in Cuba. If 3 million homes turn off a 20W light bulb, that would immediately represent a power of 60 MW”, emphasized the president.

Among the seven thermoelectric plants in operation, there are at least five operating with limited capacity. The Máximo Gómez plant in Mariel can generate up to 370 MW, but operates with 239 MW. The Otto Parellada plant in Talla Pierda can produce up to 60MW, but generates only 45 MW. The Ernesto Che Guevara plant, in Santa Cruz do Sul, produces 77MW less than its nominal capacity.

During peak hours, the island activates a system of diesel electric generators capable of producing an extra 579 MW.

Pedro Sánchez, director of Grupo Eletrogens e Serviços Elétricos (Geysel), who manages the generator plants, said that the company fails to produce 506 MW due to structural damage and lack of spare parts.

“We are going through a very tense situation regarding the acquisition of spare parts, not only because of the lack of financing, but also because of the complexity of being able to reach possible suppliers”, he commented referring to the sanctions imposed by the US.

The United States has imposed an economic blockade against Cuba since 1962, which has generated an accumulated US$ 147.8 billion in losses. On 29 occasions the UN General Assembly condemned the embargo, considered a unilateral coercive measure. However, the White House maintained the hostile policy.

After Bolsonaro breaks diplomacy, Brazilians in Venezuela will have to vote in Colombia

After complaint in Brasil de Fato, municipality of Paraná is sentenced to indemnify indigenous people