Goal #1. How the Armed Forces of Ukraine can get to the Crimean bridge

The Ukrainian leadership says that it will hit the “construction of the century” of the occupiers as soon as the opportunity arises. The experts disagreed.

Major General of the Armed Forces of Ukraine Dmitry Marchenko, who led the defense of the Nikolaev region, said that after receiving the weapons promised by the West, a blow would be struck on the bridge leading from Russia to the Ukrainian peninsula of Crimea occupied by it. Ukrainian intelligence officers received technical documentation of the Kerch bridge, which will make the task easier. Perild.com tells the details.

“Kerch bridge must be destroyed”

The Kerch bridge, which Russia built after the annexation of Crimea and named Krymsky, will be the number one target for the Ukrainian Armed Forces after receiving the promised weapons. declared Major General of the Armed Forces of Ukraine Dmitry Marchenko in an interview with Krym.Realii this week.

“Yes, it’s one hundred percent [Керченский мост – одна из целей]. This is not a secret either for their military or for our military. Neither for their civilians, nor for our civilians. This will be the number one target for defeat … We, as it were, should simply cut off the main “gut” of pulling up reserves. As soon as this “gut” is cut off, they will start to panic,” he said.

Marchenko stressed that “those who ran in Simferopol and Crimea with Russian flags will quickly get Ukrainian ones and will run with Ukrainian ones.” “Unfortunately, the population there is like that,” the major general said.

Also, according to Marchenko, after receiving the weapons promised by the West, the Ukrainian troops will be able to launch a counteroffensive and finish it before the end of the summer. “We just need to finish, we have the pace, we have the desire, just give us some weapons and we will do it,” he said.

Similar statements have already been made by Ukrainian officials. In April, NSDC Secretary Aleksey Danilov did not rule out a strike on the Crimean bridge, if there was such an opportunity.

Then the Office of the President and the Ministry of Internal Affairs noted that Ukraine does not have such an opportunity. At the same time, the ex-deputy chief of the General Staff of the Armed Forces of Ukraine, Lieutenant General Igor Romanenko, said that Ukraine may not be able to destroy the entire Kerch bridge, but theoretically it can strike at the right time, for example, when occupying troops march on it.

On June 16, the Main Intelligence Directorate of the Ministry of Defense of Ukraine announced that they had received “detailed technical documentation” of the Kerch bridge and published it “for public review and study.”

The document contains detailed information about the terrain, road surface, bridge supports, anti-landslide structures, entrances and exits and the entire infrastructure of the complex.

The head of the Mejlis of the Crimean Tatar people, Refat Chubarov, said that Ukraine should destroy the bridge across the Kerch Strait, which is the main mechanism that allows Russia to maintain a reinforced military presence in Crimea and strike at the mainland.

“There is no doubt that the Kerch bridge must be destroyed. This is a prerequisite to bring closer the liberation of Ukraine in general and Crimea in particular. This is a military necessity,” said Chubarov.

This is being talked about not only in Ukraine. Early June in the New York Post came out a column calling for the immediate destruction of the Kerch bridge.

“By the end of the summer, Moscow may have fully secured its land bridge to Crimea. This would be disastrous. A Russian land link would allow Putin to control the Black Sea coast from Crimea to Georgia. The Ukrainian military must stop him,” the article says.

The author states that this can only be done if the administration of US President Joe Biden “shows its readiness to finally and properly confront Russia.”

“With a land bridge, Moscow can steadily resupply forces and attack western Ukraine. This land bridge across the Donbass will also allow Russia to eventually capture Odessa. What can be done to prevent Russia from securing the Crimean land bridge? The beginning could be the destruction of the bridge through the Kerch Strait,” the NYP article says.

To deal with this, Ukraine needs long-range missiles and much more airpower, provided by drones and fighter jets. Either the MiG-29 and Su-24, or the old American F-14 and F-16 will do.

“Of course, this comes with risks. No one wants a wider war. However, Western indecision has the unintended consequence of prolonging a conflict that is already more than costly and dangerous enough,” the author writes.

What experts say about the blow to the Kerch bridge

The destruction of the bridge across the Kerch Strait has become a national idea, military expert Oleg Zhdanov believes. But there is no need to destroy it, and it is unlikely to succeed, he noted.

“Carthage must be destroyed … But I don’t think it needs to be destroyed. It needs to be damaged – both the railway part of the bridge and the road – so that it cannot perform its main function. In order not to be carried out by any railway , nor the supply of Russian troops by road through this Crimean bridge from mainland Russia,” he said on Radio NV.

The Kerch bridge plays a very important role for the occupier – it is the main logistical “artery” from Russia to the occupied Crimea, therefore it is heavily guarded, military expert Alexander Kovalenko said on the air of the Single Marathon on Thursday.

However, the missiles promised by the West operate no further than 300 kilometers, so the Armed Forces of Ukraine need to move much further south.

“The best case when we can issue an ultimatum is when we almost completely de-occupy the Zaporozhye region. At this time, we will be able to use weapons that can really destroy this bridge,” the expert says.

“Coastal versions of the Harpoon anti-ship missile system have the option of hitting ground targets. Even if part of the Crimean bridge is not destroyed, but part of the road and railway tracks are demolished, the bridge will lose its need, since it will not work as a transport artery,” declared Kirichevskiy on the air of Espreso.

It should be noted that on June 17 it became known that the Armed Forces of Ukraine shot down the Russian tug Vasily Bekh, who was trying to deliver weapons, supplies and personnel to the occupied Serpent Island. Presumably, it was hit by Harpoon or Brimstone missiles.

An independent expert on urban planning and architecture, Viktor Gleba, notes that the Kerch bridge is designed for tank divisions in full combat equipment to drive along it.

According to him, not every blow will lead to problems or collapse. The hit should be what is called “jewelry” – in the weakest part of the bridge.

“You need to hit the key parts and supports. You can launch a mined barge and blow it up under this bridge. But it is very difficult to hit the bridge with a rocket,” he says.

Aleksey Melnik, co-director of foreign policy and international security programs at the Razumkov Center, in turn, wonders about the consequences of the strike on the bridge.

“I would not like to act as a prophet, but if he (Putin – ed.) has thoughts or any plans on the use of tactical nuclear weapons, this can become the trigger that prompts him to such a decision. And the fact that a massive strike on to the center, Kyiv, which will have not so much a military meaning as the meaning of revenge and anger on the part of Putin. Therefore, there is a significant political risk that our military and political leadership should assess, “the expert believes.

Ukrainian experts have already spoken about the risk of using nuclear weapons in the context of strikes against everything related to Crimea. This is detailed in the material of the Armed Forces of Ukraine will enter the Crimea by the end of the year.

Earlier, in the Russian specialized media on military topics, about the prospects for Ukraine to receive MLRS and HIMARS launchers, they wrote that they could become a “long arm” that the Armed Forces of Ukraine would reach the Crimean bridge.

How the occupiers defend their bridge

Russian Foreign Minister Sergei Lavrov said that Ukraine’s plans to destroy the Crimean bridge “will suffer a complete collapse.” At the same time, he noted that the Russian authorities are closely monitoring the supply of long-range weapons to Ukraine, and the Russian armed forces take note of such threats.

“Well, you know, we still have a responsible army and all these threats are taken into account – there is no smoke without fire, and I am convinced that all these plans will fail completely,” he said.

From the first days, the construction of the Crimean bridge was observed by patrol boats of the border service of the FSB of Russia. And behind the lighthouse on Cape Lantern there is a radio technical post from which the Russian military monitors what is happening in the Kerch Strait from it, including with the help of thermal imagers, the occupiers report.

In September 2016, the Russian media wrote that the Russian special services in the Kerch Strait tested Penguin autonomous surface-underwater robotic systems, which are supposedly capable of detecting explosive devices and enemy divers.

To protect the bridge across the Kerch Strait, a new military formation is also involved – the naval brigade of the National Guard. 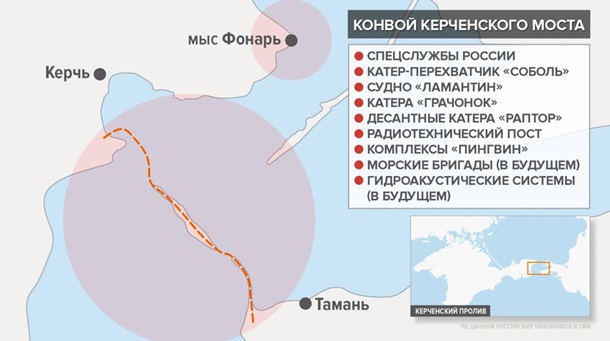 In January 2018, in the area of ​​Cape Fiolent near Sevastopol, the Russian S-400 Triumf anti-aircraft missile systems took up combat duty. In September, the same complexes were placed in Evpatoria.

In November 2018, the fourth new division of the S-400 anti-aircraft missile system took up combat duty at Dzhankoy. And the third S-400 Triumph appeared in Kerch approximately in October-November of the same year.

The Russians placed another division near the Kerch bridge – near Feodosia – in 2017.

In addition to the S-400, Russia has deployed several divisions of the Pantsir-S anti-aircraft missile and gun systems and the new Bal coastal missile system in Crimea.

Bruno and Dom were executed by an organization, says indigenous entity, contesting the PF