Presidential elections in Colombia will be decisive for agrarian reform

The presidential elections next Sunday (19) will be fundamental for the future of the agrarian question in Colombia. Like Brazil, the country is marked by the concentration of land and large estates, which were two of the main reasons for the outbreak and maintenance of the armed conflict that has lasted 58 years.

“We characterize Petro as progressive-liberal. We do not believe that he could carry out an integral and popular agrarian reform, but we believe that he could advance in the democratization of land”, comments the executive secretary of the National Agrarian Coordinator (CNA), Fabián Barreto.

Me and League of Anti-Corruption Rulersa slate headed by Rodolfo Hernandez and representing the country’s right wing, proposes to maintain a policy of subsidies as long as farmers comply with the promised production, but does not talk about redistributing the land.

Read more: Gustavo Petro: who is the leftist who can be president of Colombia?

“A possible government of Hernández would be the continuation of a policy of spoliation of the lands. We believe that the paramilitaries would remain in the territory, which would be very complicated for the security of the communities”, analyzes Barreto.

The difference in the program is also expressed in the profile of the presidential candidates. Gustavo Petro is a senator, was a deputy, mayor of Bogotá and one of the founders of the M-19 urban guerrilla.

Rodolfo Hernández is an engineer, businessman and landowner. He lives on a farm in Pidecuesta, in the department of Santander, and claims that his fortune valued at US$100 million came from “70% in land and 30% in exchanges, sales and financing”.

Learn more: What happens if the right-wing presidential candidate is convicted of corruption in Colombia

There is no recent official survey on land ownership and distribution in the country. according to National Center for Historical Memory, between 1903 and 2021, the Colombian State granted 60 million hectares of land, equivalent to 50% of the territory. Independent surveys show that 5% of the Colombian population own 87% of the land.

In the 1990s, against the spoliation and violent eviction of their territories, Colombian peasants began to organize and defend their right to land with weapons. From this process emerged the first guerrillas: the Revolutionary Armed Forces of the Common – People’s Army (FARC-EP), the National Liberation Army (ELN), both in 1964, and the Popular Liberation Army (EPL), in 1967.

The beginning of the conflict in the countryside and popular pressure made then-President Carlos Lleras Restrepo discuss the first land reform proposal for the country, creating the Colombian Institute for Agrarian Reform (Incora). His gamble was to create a “thriving class of producers.” 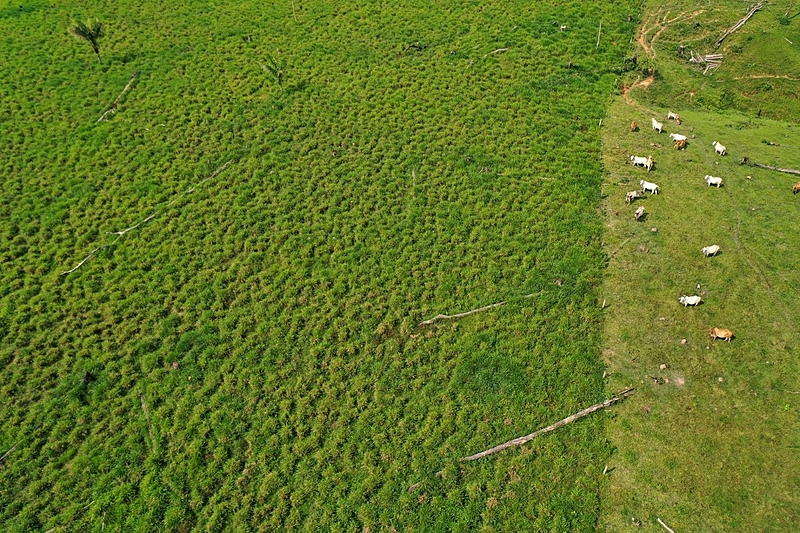 In Colombia, 0.4% of agricultural units have more than 500 hectares and correspond to 41.1% of the territory / Raul Arboleda / AFP

However, the proposal was not enough and, after 58 years of armed conflict between guerrillas, drug traffickers, paramilitaries and the State, the land issue remains in check.

The Peace Agreements signed in 2016 provided in their first chapter for an integral rural reform, with the distribution of land to small farmers, opening of credit, creation of infrastructure in the interior of the country to support the process of substitution of illicit and seek self-sufficiency in some countries. agricultural products.

Of the total of 7 million hectares that should have been granted to the former guerrilla, only seven of the 24 FARC-EP territorial spaces were covered, with 24 to 45 hectares each.

The last data National Agricultural Census indicate that of the 113 million arable hectares in the country, about 75% of the production units have less than 5 hectares and represent 2.1% of the area covered by the census. Properties with more than 500 hectares represent 0.4% of the units and correspond to 41.1% of the territory.

Colombia exports 58 products to 28 countries, the biggest buyers being the USA (37.5%), Belgium (5.1%) and the Netherlands (4.6%). The main Colombian agricultural exports are coffee, bananas, cocoa and flowers, as well as beef and fish. In 2021, these products accounted for US$ 9.4 billion (about R$ 47 billion) in sales, according to the Ministry of Agriculture. The agricultural sector represents about 19% of national exports, according to the National Administrative Bureau of Statistics (Dane).

The model based on agribusiness, as in Brazil, guarantees high export figures, but does not put food on the plate. THE FAO indicates that Colombia may suffer from “acute hunger” by the end of 2022, with 7.3 million people experiencing food insecurity.

Colombia is the largest producer of coca plant in the world. The replacement of illicit cultivation is one of the points of the Peace Agreement, signed in 2016 / Raul Arboleda / AFP

Another issue raised by the United Nations is the foreign appropriation of land in Colombia. In 2013, the company Cargill controlled, through 36 different companies, the production of corn and soybeans on 52 thousand hectares in the department of Vichada alone.

Fabián Barreto says that a comprehensive reform could guarantee self-sufficiency in the production of cereals, such as rice and corn, and animal protein, such as meat and milk. But for that, he says it is necessary to create a project that encompasses land rights, technical support, production planning and input subsidies to small farmers.

“We must create a follow-up plan, it is no use just handing over the land to small producers and waiting for them to defend themselves”, he says.

“We hope that a new progressive government will attack the formation of paramilitary groups that are at the service of the great landowners and try to liquidate our comrades”, defends the director of the CNA.

Since 2016, 1,624 human rights defenders and ex-combatants have been murdered, with 930 killed during the administration of Iván Duque. Most of them lived in the countryside. In 2022 alone, 44 massacres were recorded with more than 100 victims. Twenty-one of the victims were signatories to the peace mechanism.

:: Massacres and police abuse: what are the origins of violence in Colombia? ::

Faced with the violence in the countryside, the CNA started to organize peasant and interethnic guards together with the indigenous movement and quilombola communities. There are about 700 organized peasants and 200 indigenous guards, with a greater presence in the region of Cauca, Arauca, Santander, Cesar and Amazonas.

“It is a self-protection strategy that is linked to our proposal for agri-food peasant territories”, says Barreto.

So far, there are 500,000 hectares declared as agri-food peasant territories. CNA’s goal is to reach 10 million hectares. The Coordinator, which includes 50 peasant organizations and is the arm of Via Campesina in Colombia, has also built biofactories to produce organic fertilizers. “We want to build a large national bioinput factory”, said the director of the CNA.

“We bet that Petro and Francia will win. We have a lot of political identity with Francia on this ticket. The institutional dispute is an axis of struggle. In this case we would win the government, but the dispute for power is much longer”, concludes Fabián Barreto.

Near Kyiv found a cache of ammunition occupiers