Women from five continents gather in Caracas in the I International Feminist Brigade Alexandra Kollontai, which starts this Friday (17th) and runs until June 27th. The purpose of the meeting is to exchange experiences on women’s community organization and popular feminism.

There are 29 women from 20 countries, including Cuba, the USA, Palestine and South Africa, who will travel through five Venezuelan states to get to know communes and other popular organizations run by women.

“We understand that the fundamental mission of this Brigade will be to debate the concept of revolutionary popular feminism, because we understand that feminism is also a space of struggle in dispute. Therefore, we want to meet with women who build territorial organizations in Venezuela, in defense of sovereignty , dignity and betting on a socialist feminism”, says Laura Franco, one of the organizers of the event. 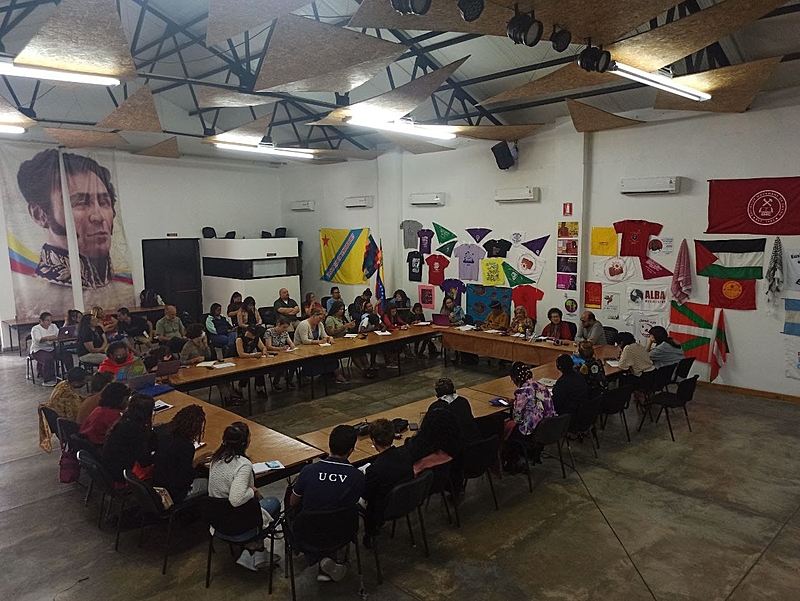 The International Feminist Brigade meets at the Experimental University of Cátia, west of Caracas, Venezuela / Ceyrali

Franco highlights how since the rise of Hugo Chávez as president and now with the government of Nicolás Maduro, the process of social transformations in Venezuela, called the Bolivarian Revolution, has a feminist character.

“The Bolivarian Revolution has the face of a woman. They occupy the main positions of leadership of popular power in Venezuela. US imperialism identifies that the Venezuelan woman is the engine and the social base of support of the Revolution, so it tries with a series of attacks demoralize, depoliticize and discourage women, believing that in this way they could carry out the plans to overthrow the government. What we have shown is that this will not happen”, says the Venezuelan feminist activist.

Since 2015, Venezuela has suffered an economic blockade imposed by the United States that generates an annual loss estimated at US$ 30 billion and caused the retraction of 60% of the country’s Gross Domestic Product in six years.

The event is promoted by the International Assembly of Peoples, the Simón Bolívar Institute for Peace and Solidarity and is part of the “Manuela Sáenz” feminist training program.

The name of the International Brigade seeks to honor the 150th birthday of Alexandra Kollontai, who was the people’s commissar for social welfare (a kind of minister) during the Soviet Union. In 1917, she was the first Soviet ambassador, in 1924, in Norway, and is a world reference for socialist feminism.

Residents of the Kherson region are urged to evacuate