Zelensky spoke in a holographic broadcast at a conference in Paris 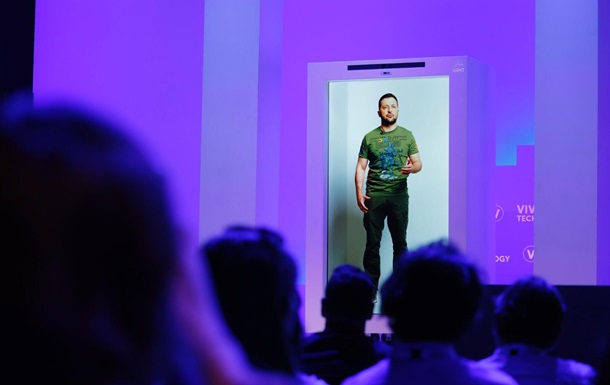 The President invited technology companies to participate in the restoration of Ukraine “as a fully digital democracy” after the end of the war.

President of Ukraine Volodymyr Zelensky spoke in the form of a holographic broadcast to representatives of large technology companies at the VivaTech conference in Paris. This was reported by The Guardian newspaper yesterday.

“It’s unusual for presidents to use a hologram to communicate with people, but this is not the only Star Wars thing we use in practice. We will also defeat the Empire,” Zelensky said, referring to Putin’s Russia.

He invited technology companies to participate in the restoration of Ukraine “as a fully digital democracy” after the end of the war.

Zelensky stressed that Ukraine will present a concrete plan for the creation of a digital government at a conference in Switzerland in the coming weeks.

“No other country in the world will offer you such an opportunity to apply the most advanced technologies at the state level. This is an experiment, a digital revolution, and the modernization of an existing system,” he said.


“It’s no longer science fiction that AI is now as smart as humans. These technological possibilities can change lives. They can simplify government to people’s relationship: no bureaucracy, no corruption.”

Earlier, Zelensky named five main industries for investment. The head of state invited investors to consider the long-term horizon of cooperation with Ukraine.


The Cabinet called the sources of restoration of Ukraine

SBU announced the detention of a Russian agent in Sumy