In “joy and struggle”, lesbians and bisexuals walk against violence and invisibility

The twentieth edition of Lesbian and Bisexual Women’s Walk of São Paulo marked, this Saturday (18), the event’s return to the streets after just over two years, since the covid-19 pandemic began in Brazil.

The act was concentrated in Praça do Ciclista, on Av. Paulista, and after cultural attractions, he took a walk along Rua Augusta to Praça Roosevelt, in the central region. On the front banner, the words “For the struggle, memory and resistance. Against racism, transphobia, biphobia and lesbophobia”. According to the organization, between 1,500 and 2,000 people participated in the walk.

“Today is a day of joy for us to celebrate our love and our way of being, but it is also a day of struggle because our invisibility is very great: at work, in the family, in all fields of society,” said Marcia Balades. , the Brazilian Lesbian League and the Feminist Block of the Marijuana March.

By Luana and Marielle

The PSOL councilor from Rio de Janeiro was executed in March 2018 in Rio de Janeiro, in a case whose principals have not yet been appointed. Luana Barbosa was killed two years before that, in April 2016, in Ribeirão Preto (SP). She was beaten by three military police after refusing to be searched without a female police presence.

:: Unpublished research will map the socio-demographic profile of lesbians in Brazil ::

“We are here to resist this institutional, physical, sexual and moral violence. To this heteropatriarchy that imposes itself on our lives and bodies and that determines what is considered normal in society”, highlighted Célia, from the World March of Women (WMM).

“We are on the march in defense of a popular and feminist project of life. In other words, for a society in which we all live with freedom, autonomy and without violence. Where we are not afraid to be happy,” she summarized. 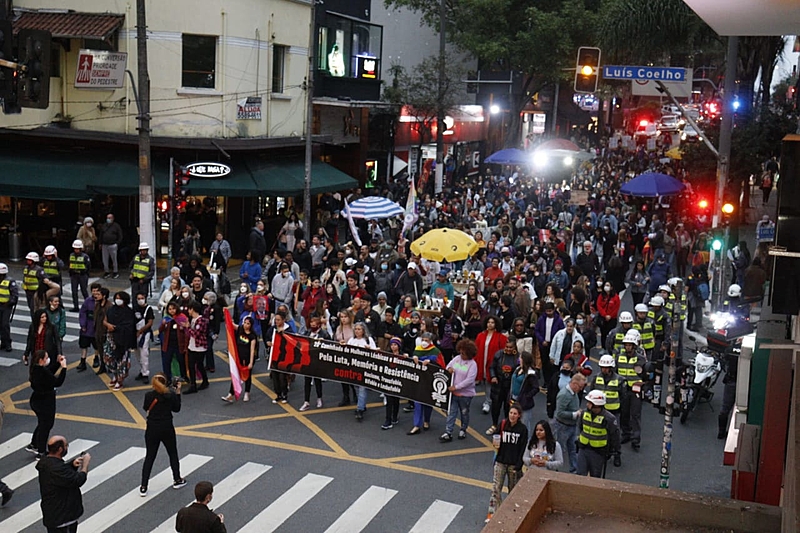 “The party is beautiful”, described Paula Mendes, also from MMM, to the sound of electronic music playing in the background. “Fora Bolsonaro” posters and stickers permeated the act, in line with Mendes’ statement that “misgovernment” is responsible for the increase in poverty and, consequently, for the growth of the homeless population.

“This situation affects lesbian, bisexual and trans women a lot, because our sexual orientation makes us more economically vulnerable”, evaluated Paula. “Many of us even lost the right to continue living with the family, we lost our roof”, she exemplified. “But we continued to resist with a lot of struggle, joy and celebration”.

:: “I’m not the street where I sleep”: cis and trans women tell what it’s like to live on the sidewalks of São Paulo ::

The Lesbian and Bisexual Walk traditionally takes place the day before the São Paulo LGBTQIA+ Parade. Scheduled for this Sunday (19), 3.5 million people are expected to attend the event.

“Youth will not accept genocide that has taken place in RJ”, says Levante activist

The Legion of Freedom is rapidly replenished with volunteers - Arestovich