The World Council of Churches condemned the war against Ukraine 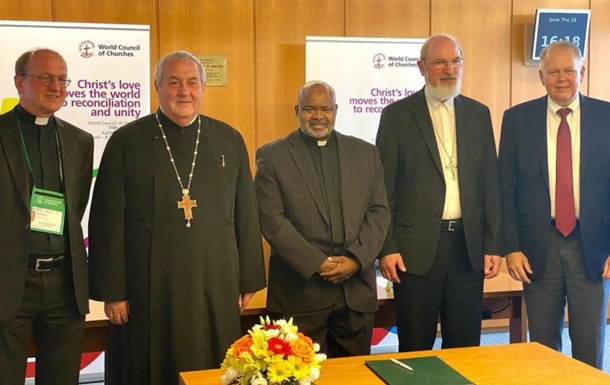 The World Council of Churches condemned the war against Ukraine

The organization rejected the justification of the aggression of the Russian Federation by religion, and also called for an exchange of prisoners of war and the bodies of the dead, the council said in a special statement.

The organization rejected the justification of the aggression of the Russian Federation by religion, and also called for an exchange of prisoners of war and the bodies of the dead.

“The World Council of Churches reiterates the call of the global society of churches represented in the WCC for an end to this tragic war, for an immediate ceasefire to stop death and destruction, and for dialogue and negotiation to ensure a sustainable peace. A war with killing and all other tragic consequences, which it entails is inconsistent with the very nature and will of God in relation to humanity and against our fundamental Christian and ecumenical principles,” the statement said.

The Council called on “all parties to the conflict” to respect the principles of international humanitarian law, and called on the international community to invest heavily in promoting peace, not escalation and division.

The World Council of Churches is asking the Acting Secretary General to lead a Pilgrimage of Justice and Peace delegation to Kyiv and Moscow to meet with church leaders to find out what promotes peace and what governments need for an immediate ceasefire.

“The WCC prays for all the victims of this conflict in Ukraine, in the region and around the world, so that their suffering will end, so that they can return to life in safety and dignity, and assures them of love and sympathy,” the organization notes.

Recall that in an interview with the Italian press, Pope Francis said that “NATO is barking at Russia” and that the Alliance could provoke Moscow to attack Ukraine. Foreign leaders were surprised by this statement of the Pontiff. Thus, the Ministry of Foreign Affairs of Poland expressed concern about the statements of the Pope of Rome about the war in Ukraine.

Earlier, the Pope spoke about a conversation with Hungarian Prime Minister Viktor Orban, in which he spoke about the plans of the Russians to end the war in Ukraine by May 9.

Andrey Danilko confessed why he has no family