Who is Francia Márquez, the first black woman vice president in Colombia?

“After 200 years, we conquered a government of the people. The government of the ‘nobodies’ of Colombia. Let’s live with dignity in a tasty way”, said Francia Márquez in her first speech after winning the presidential elections. The Colombian lawyer makes history by becoming the first black woman to hold the position. In the 2nd round, held last Sunday (19), the coalition Pacto Histórico with Francia and Gustavo Petro obtained 11.2 million votes, equivalent to 50.44% of the preference.

Francia Elena Márquez Mina is from Yolombó, in the region of La Toma, in the department of Cauca. She is 40 years old and started her political life defending her community from mining projects.

She was a single mother at the age of 16 and, as a teenager, started working with artisanal mining. At age 21 she gave birth to her second daughter. She graduated as an agricultural technician from the National Apprenticeship Service (SENA).

Since 1997, she has been a member of the Black Communities Process Organization of Colombia, and between 2010 and 2013 she was president of the Association of Afro-descendant Women of Yolombó.

“Thank you for sowing the seed of hope. After 200 years we have achieved a government of the people. The government of the ‘nobodies’ of Colombia. Let’s live in a delicious way”, wrote the vice-president-elect.

Francia joined the law school at the Universidad Santiago de Cali, paying for her studies by working as a domestic worker and graduating in 2020. One of her goals was to be able to defend her community legally. In 2009, it was she who wrote a guardianship action representing the Ovejas River to serve the activities of the Regional Autonomous Corporation of Valle del Cauca (CVC) and the Pacific Energy Company (EPSA).

The request argued that the mining companies’ actions, which began in the 1990s, had affected the right to a dignified life, without prior consultation of the local population. The appeal was denied twice, which triggered resistance mobilizations in the La Toma community, with Francia again as the protagonist.

Faced with popular pressure, the Supreme Court of Justice granted collective reparations to 27 community councils in the La Toma region affected by the “Salvajinas” dam.

“I am part of those who raise their voices to stop the destruction of rivers, forests and plateaus. Of those people who dream that human beings can change the economic model of death to take a step towards a model that guarantees life”, these.

In 2015, Francia won the National Human Rights Award after organizing the “turban march”, a walk with hundreds of black women who traveled about 600km from Suárez to the Ministry of Justice in Bogotá to denounce illegal mining in their homes. communities.

Three years later, the activist was awarded again, this time with the Goldman Environmental Prizeconsidered the Nobel Prize in the environmental sector.

“In our community, we learn that dignity is priceless. To love and value the territory as a living space, and to fight for it, even putting our own lives at risk”, he said upon receiving the award. 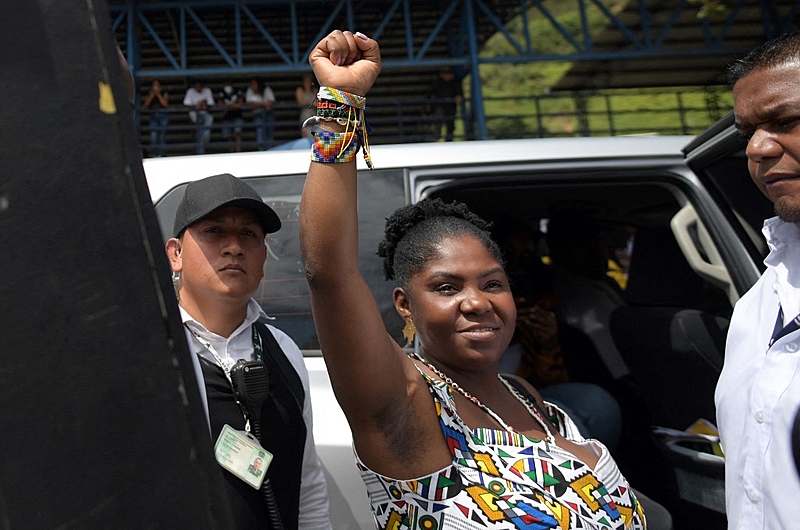 One of its main government banners is to create the Ministry of Equality to address racial and gender issues.

“We are victims of necropolitics, and the racialized territories are the ones that suffer the most from the environmental crisis. The rich are looking for other planets, but this is the one we have to take care of,” Francia said during a meeting with Angela Davis in 2021.

Several analysts agree that Francia Márquez was instrumental in mobilizing the vote of youth and women, helping to jump from 8.5 million to 11.2 million votes for the Historic Pact.

Francia Elena Márquez Mina says she prefers to be called by her full name so that everyone knows her mother’s last names and her ancestors.

“I am part of a history of struggle and resistance that began with my ancestors brought into slavery. I am part of the fight against structural racism, I am part of those who fight to continue giving birth to freedom and justice”, declared the vice president Colombian.