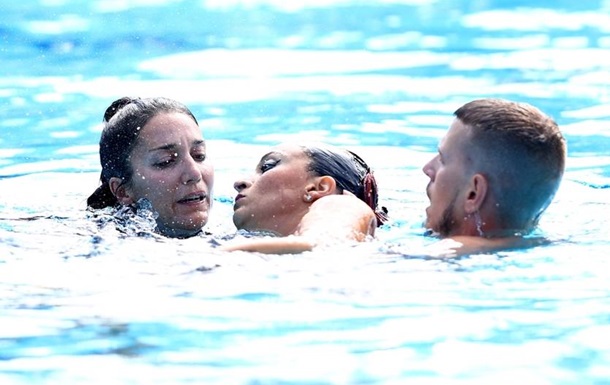 The coach rescued an athlete from the bottom of the pool, who lost consciousness

The tragedy was prevented by the swimmer’s coach, who pulled her out of the pool in time.

The artistic swimming competition at the World Aquatics Championships in Budapest almost ended in tragedy. American swimmer Anita Alvarez collapsed at the end of her performance in the women’s free skate and sank to the bottom of the pool.

Her coach Andrea Fuentes managed to save the athlete’s life. The four-time Olympic medalist in synchronized swimming immediately jumped into the pool and rushed to the aid of the 25-year-old swimmer.

She lifted Alvarez to the surface and helped her to the edge of the pool. After that, the American received medical assistance and was taken away on a stretcher.


Rapid rescue.@AFP photographers Oli Scarff and Peter Kohalmi capture the dramatic rescue of USA’s Anita Alvarez from the bottom of the pool when she fainted during the women’s solo free artistic swimming finals at the Budapest 2022 World Aquatics Championships pic.twitter.com/8Y0wo6lSUn

“I don’t think I’ve ever swum so fast before, even when I got Olympic medals. Eventually, I was able to lift her up and she wasn’t breathing. Later, a lifeguard arrived,” Fuentes said. The coach also said that Alvarez is fine, she will rest and will consult with her doctor to see if she will be able to participate in the swimming team finals, which should take place on Friday, June 24.

Note that this is not the first time in Alvarez’s career that she has passed out in competition. Previously, this happened to her during the qualification for the 2020 Olympics. Then Anita’s life was also saved by her coach, who pulled the athlete out of the pool.

Recall that in this discipline at the World Championships in Budapest, Japanese Yukiko Inui won gold, and Ukrainian Marta Fedina won silver. Alvarez, despite losing consciousness, finished in seventh place.

In the Kherson region, the police put out a forest fire almost with their bare hands