Russian occupiers have captured several settlements in the Luhansk region in recent days.

Russian occupiers may approach the city of Lisichansk, which is located a couple of kilometers from Severodonetsk, in the coming days, the Institute for the Study of War said. According to British military intelligence, on June 23, the occupying troops advanced five kilometers towards the southern regions of Lysichansk in three days. The enemy covers the whole quarters of Lisichansk with dense fire. Perild.com tells the details.

Since June 19, the occupying forces have advanced more than five kilometers to the southern approaches to the city of Lysichansk, according to a daily analysis of British military intelligence published by the British Ministry of Defense on June 23.

Lysychansk is the last major city in the Luhansk region that remains under Ukrainian control. Russian forces have occupied about 95 percent of the region to date. About why the Kremlin needs the Luhansk region, in detail in the material Take at any cost.

A British intelligence report states that some Ukrainian units apparently withdrew in the area to avoid being surrounded.

British experts attribute the improvement in Russia’s performance in this sector to the recent reinforcements of the occupying forces and a strong concentration of fire. According to the Ukrainian side, the enemy is erasing Lisichansk from the face of the earth with all the weapons that he has in stock.

On June 23, the head of the Lugansk regional military administration, Serhiy Gaidai, said that the invaders had concentrated more than a hundred multiple launch rocket systems in this direction, and there were so many cannon artillery and mortars that they were covering entire neighborhoods with dense fire. This leads to numerous casualties among the civilian population.

The occupiers are also putting increasing pressure on the Lysychansko-Severodonetsk pocket with their creeping advance along the fringes of built-up areas, the British added, noting that Russian efforts to achieve a deeper encirclement to seize the western part of Donetsk region remain unsuccessful.

In this sector of the front, the invaders stepped up their offensive at the beginning of the week, having accumulated reserves, Gaidai reported. On June 21, the General Staff of the Armed Forces announced that they had lost control over the settlements of Podlesnoe and Mirnaya Dolina, located between Lisichansk and Toshkovka. Later that day it became known about the loss of Toszkowka.

“The situation is very difficult. The Russians have gathered all the reserves – troops, equipment – even from the newly occupied territories. And all this was sent to storm Severodonetsk and in the direction of Zolote-Toshkovka. The Russians, unfortunately, have success from Toshkovka – they managed to advance several populated points,” the head of the OVA said.

The morning summary of the General Staff of the Armed Forces of Ukraine for June 23 says that the invaders captured two more settlements in the Luhansk region – Loskutovka and Ray-Aleksandrivka, which are located about 20 kilometers from Lisichansk and Severodonetsk. 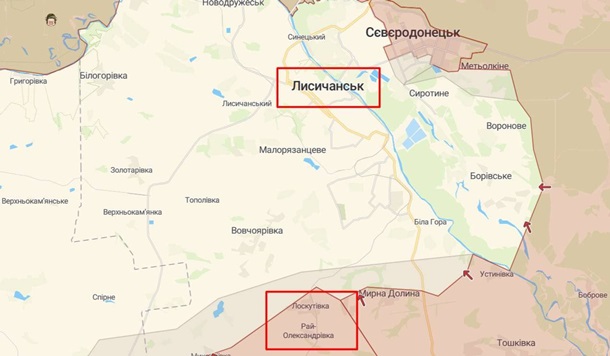 Armed Forces of Ukraine are retreating from under Lisichanka, so as not to fall into the cauldron

“The enemy is conducting assault operations in order to establish control over the settlement of Sirotine. It is carrying out preparatory measures for forcing the Seversky Donets River,” the General Staff said in a statement. Russian troops have not yet tried to force the river after the failure of the operation near Belogorovka.

In addition, the enemy does not leave plans to take control of the Lisichansk-Bakhmut highway, the report says. The invaders are conducting offensive operations in the directions of Zolote and Volcheyarovka (to the north-west of Loskutovka).

They want to seize the dominant heights in the Berestovoye area in order to establish control over the “road of life”.

“In order to strengthen the grouping in the indicated direction, in the area of ​​​​the settlement of Novotoshkivske, the enemy transferred up to one battalion tactical group from the Central Military District,” the General Staff added.

Gaidai noted that the “road of life” linking Lisichansk with Bakhmut is now not used due to constant shelling, but “quiet evacuation” from the city continues by other means.

He admitted that the Ukrainian defenders could move away from Zolote, so that there was no cordon, the command could give the command to retreat to other fortified positions. The head of the Lugansk OVA noted that Zolote has been a line of defense since 2014, all the fortifications there have been shelled for eight years, and since February 24 they have been shelled around the clock.

According to him, the Armed Forces of Ukraine may still have to retreat from near Lysichansk in order to avoid encirclement.

Gaidai explained that a small part of the Luhansk region remains an outpost, the Russians “can’t get past Severodonetsk for four months,” and they need a “real victory,” so they threw all their efforts into the Lugansk region.

The evening report of the General Staff on June 23 says that the Armed Forces of Ukraine stopped the offensive in the direction of the southern outskirts of Lisichansk, inflicted losses on the enemy and forced them to retreat. They noted that the occupiers are putting forward reserves to resume the offensive.

The offensive actions of the enemy near Borovskoye were also suspended by the Ukrainian defenders, the report says.

In the Bakhmut direction, the invaders captured Nikolaevka and are trying to establish control over the settlement of Gornoe.

However, reconnaissance in combat in the area of ​​​​the settlement of Vershina and an attempt to tie up the actions of the units of the Armed Forces of Ukraine in the Klinovoe region ended in failure for the enemy.

“Russian troops continued their advance north towards Lysichansk along the western bank of the Seversky Donets River and on June 22 made significant progress south of Lysichansk,” the report says.

“They will probably need further protracted battles with Ukrainian forces, similar to the blockade battles in Mariupol and Severodonetsk, to capture Lisichansk,” Washington analysts said.

The Russian occupiers also carried out air strikes on Verkhnekamenka, which is within ten kilometers of Lysichansk, probably to hinder the Ukrainian advance towards Lysichansk.

“Russian troops will likely continue to regroup and increase the intensity of the operation in the area between Bakhmut and Lysichansk in order to advance towards Lysichansk from an additional axis, break Ukrainian supply lines and try to consolidate control over the entire area of ​​Severodonetsk and Lysichansk in the coming days,” they said. at ISW.

The invaders are likely to reach Lisichansk in the coming days, although they are unlikely to be able to quickly capture the Severodonetsk-Lysichansk region, according to a report from an organization monitoring the situation on the battlefield.

Russian troops are trying to reach Lisichansk from the south, so as not to force the Seversky Donets River in Severodonetsk, where fierce street fighting continues. Ukrainian forces currently control only the territory of the Azot chemical plant in the west of the city.

According to Aleksey Arestovich, adviser to the head of the President’s Office, the threat of a “cauldron” in this direction is “absolutely real”, but noted that the Armed Forces of Ukraine probably have “some kind of plan” for the current situation.

The Ministry of Defense, in turn, explained that the Armed Forces of Ukraine are conducting mobile defense there. According to Deputy Defense Minister Anna Malyar, the enemy has fire superiority, but the Armed Forces of Ukraine inflict losses on the Russians and are doing everything possible to prevent the encirclement and advancement of the Russian Federation inland.

Malyar stressed that “no one hides the fact that the situation there is complicated.” “Now the Ukrainian troops are carrying out mobile defense, as it is called in military language, they are changing certain lines,” Malyar said on June 23.

It should be noted that even before the entry of the Russian invaders into Severodonetsk, it was repeatedly said that the Armed Forces of Ukraine would most likely have to leave the city and retreat to more advantageous positions in the hilly Lysichansk. However, the Armed Forces of Ukraine in Severodonetsk hold out for more than two months, exhausting the enemy forces.

In Paraná, opening of the Agroecology Journey demands justice for Dom and Bruno