In less than four years with Bolsonaro, fuel rises almost the same as on 13 PT

The price of gasoline and diesel at gas stations in the country has accumulated in the government of President Jair Bolsonaro (PL) a rise similar to that recorded during the more than 13 years in which members of the Workers’ Party (PT) presided over the country.

From January 2019 – when Bolsonaro assumed the presidency – to June 2022, gasoline has already risen 69%, according to data from the National Petroleum Agency (ANP) tabulated by the Social Observatory of Petroleum (OSP).

From January 2003 –when ex-president Luiz Inácio Lula da Silva (PT) took office– to May 2016 –the month in which ex-president Dilma Rousseff (PT) was removed due to the impeachment process–, the same fuel rose 72%.

In the case of diesel oil, in more than 13 years of PT governments, there was an increase of almost 98%. In three and a half years of the Bolsonaro government, the increase was 100%.

The gas cylinder and ethanol accumulated increases of 83% and 78%, respectively, during the Lula and Dilma administrations. In the Bolsonaro government, they have already risen 62% and 76%.

Petrobras, the main supplier of oil products in the country, argues that the recent increases are related to the war between Russia and Ukraine, which raised the price of a barrel of oil to more than 100 dollars. In 2008, during Lula’s second term, the same barrel cost more than 140 dollars. In this term, gasoline rose 3.5% and diesel, 7%. 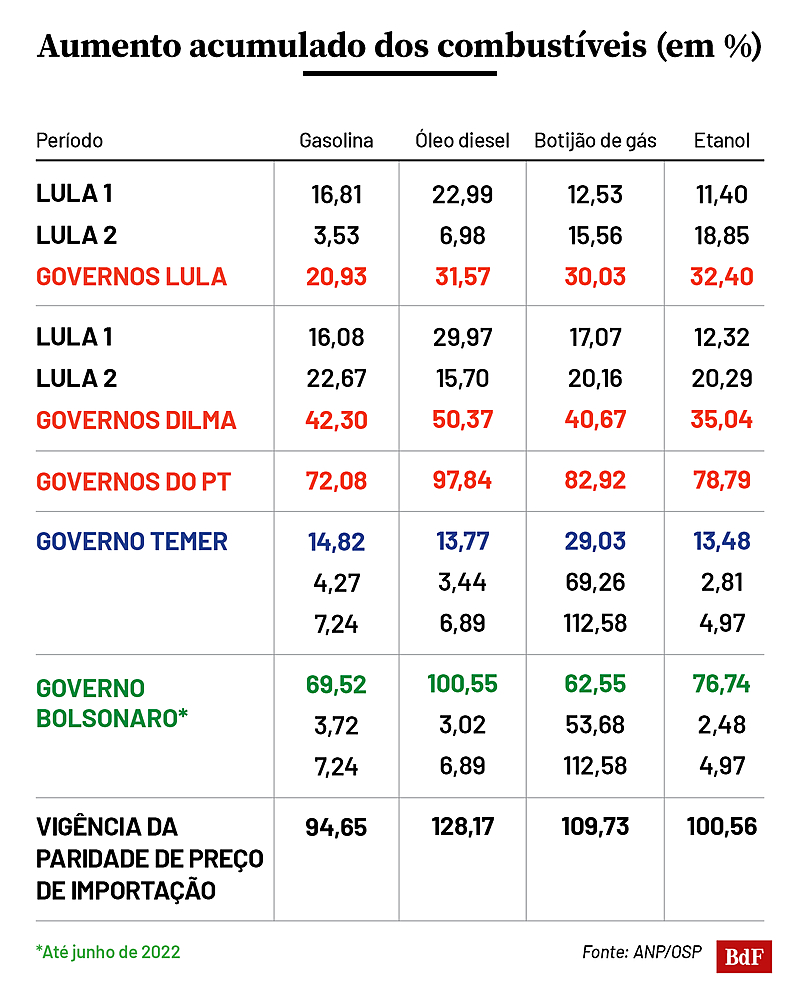 The increases accumulated during the Bolsonaro administration have already become a problem for the government. Seeking re-election, the president has advocated a reduction in fuel taxes, even if this could harm health and education policies, and has vehemently criticized Petrobras bosses appointed by himself.

:: 2022 elections should define privatization or preservation of state-owned companies ::

Last Friday (17), after the state-owned company announced increases in gasoline and diesel, Bolsonaro defended the creation of a Parliamentary Commission of Inquiry (CPI) to investigate the leadership of Petrobras.

His government, however, has not yet taken any action to change Petrobras’ pricing policy, which has been identified as the main cause of fuel increases.

Created in 2016, under the government of Michel Temer (MDB), this policy links the value of oil products sold by Petrobras to the cost of these products on the international market. In this way, Petrobras sells fuels in Brazil at the so-called import parity price (PPI).

Under this policy, Petrobras has accumulated record profits and distributed them to shareholders, most of them foreigners. Banks have praised the behavior. Bolsonaro’s economic team, aligned with the financial market, is against intervening in the state’s prices.

Read more: Juca Abdalla, the banker who profits from the privatization of Eletrobras and will manage Petrobras

Since Temer took office in May 2016, gasoline at stations across the country has risen by more than 94%; diesel increased 128% and gas cylinders, 109%.

“PPI is responsible for the increase in fuel prices in Brazil because it transmits international prices and the dollar to local prices, but without need”, explained economist Eric Gil Dantas, from OSP. “Brazil is the ninth largest producer of oil and gas in the world. It has a large refining park that handles most of its demand.”

According to Dantas, through the PPI, Brazilians pay a price for gasoline as if all gasoline consumed in the country were imported. According to him, Petrobras could calculate its prices using a proportion of what is imported – less than 20% – and it would still be profitable.

“The problem is not Petrobras. The problem is the management of Petrobras in the Bolsonaro government, when the company ceased to have a social function to surrender to the exclusive interests of the market and shareholders, aimed at generating profits and dividends, guaranteed by the PPI”, said Deyvid Bacelar, general coordinator. of the Single Federation of Oil Workers (FUP).

Practically a monopolist, Petrobras determines fuel prices in the country. According to Dantas, even the price of ethanol, which is not an oil derivative, ends up being impacted by the state-owned company.

FBI Seizes Confidential US Documents During Search of Trump’s Home