“Here, capital does not exploit labor”, says Alckmin at an MST event

In Andradina, for the inauguration of the dairy factory of Coapar, milk production cooperative of the Landless Workers Movement (MST), this Friday (24), the pre-candidate for vice president Geraldo Alckmin (PSB), passed quickly, without noticing, by a group of three rural producers from Andradina, in the interior of São Paulo, who were waiting for him at the event.

“I love Alckmin, I would like a photo with him”, repeated one of the friends of the group, which reflected a minority profile of the event, formed mostly by farmers and MST militants, who were suspicious of the former governor of São Paulo, who now forms an unusual alliance with former president Luiz Inácio Lula da Silvia (PT) to try to defeat Jair Bolsonaro (PL) in the 2022 elections.

At the first meeting between the MST and Alckmin, there was an expectation about the former governor’s speech. A PT leader explained that the vice presidential candidate was calm and already expected some resistance.

“He was brave to come to inaugurate an MST project, he knows the risk he was running, but he came, because he also knows that this gesture of approximation is fundamental for distrust of him to be left behind”, he said.

When it was announced by the event’s ceremonial, Alckmin received little applause, but he went up to the stage smiling, alongside the PT’s pre-candidate for the government of São Paulo, Fernando Haddad, as well as federal and state deputies. 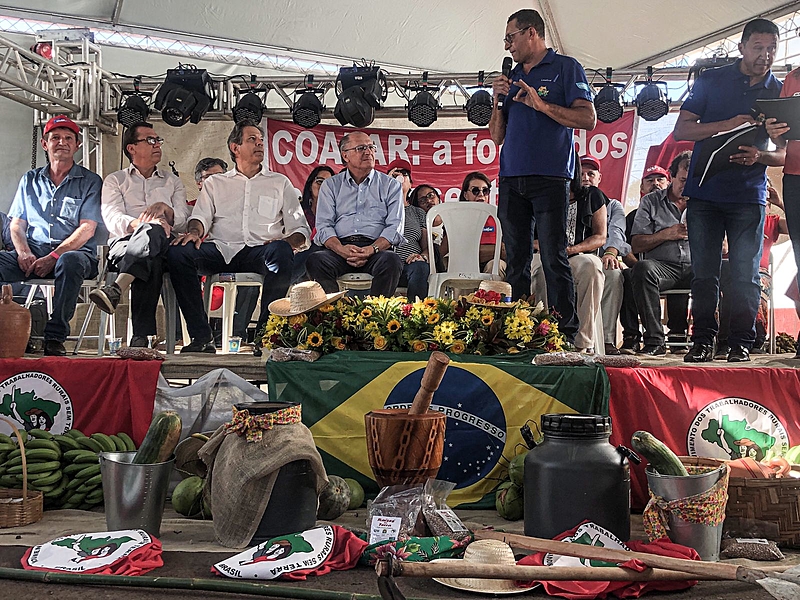 It was up to MST national coordinator Gilmar Mauro to break the ice at the meeting. “Many people criticized us for inviting Alckmin to this event. A lot of people criticized Alckmin for accepting. Do you know what unites us right now? The first question that leads us to join together, Democrats and Republicans of this country, is that we want ‘Bolsonaro out’. The second is that 33 million people are hungry in this country and here we have the solution.”

When he was called to the stage, Alckmin received a less resistant audience and proved that the horizon of a campaigning politician cannot be underestimated. Among praise for the MST, he defended the organization of rural workers.

“I highlight here the socio-activism of the MST”, he began. “The union of all of you, building the MST, made the difference, it is a story of struggles and achievements. Here at Coapar, you get the milk from the cooperative, you do the logistics, you industrialize more than 15 products and sell them. One does not exploit the other, capital does not exploit work, but it is the cooperative that makes the region grow and adds value.”

There was still, in the short speech, a joke that drew laughter from the audience. “There is still time and I want to warn the chayote producers in the region, you will not be forgotten.”

In the end, Alckmin unveiled the inauguration plaque next to Haddad and MST leader and put on an MST cap, to the delight of the public.

Editorial – October 2, the most important day for Brazil since redemocratization

Datafolha: In RJ, Cláudio Castro leads with 44%; Marcelo Freixo has 35% of the valid votes