NASA has published a photo of the parade of planets 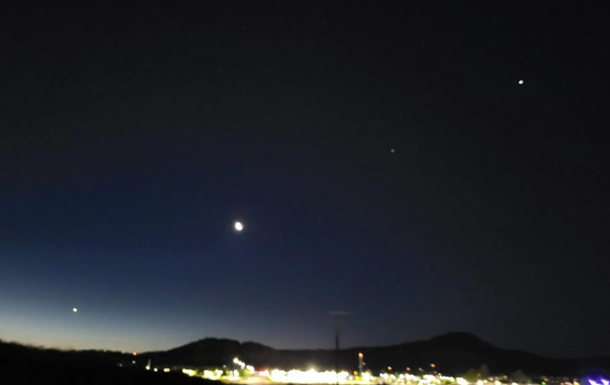 Billions of people have been able to capture how Mercury, Venus, Mars, Jupiter and Saturn lined up in one arc in the sky.

The US National Aeronautics and Space Administration (NASA) showed a photo of the planetary parade, which took place on the night of June 23-24. The pictures were published on Friday, June 24, on the website NASA.

The footage shows Mercury, Venus, Mars, Jupiter and Saturn, which lined up in one arc in the sky. Next to them was the Earth’s satellite, the Moon.

The parade of planets was most clearly visible from 02.30 to 03.00 Kyiv time. Venus, Mars, Jupiter and Saturn could be seen with the naked eye. The next time such luck will turn up only in 2040. Large parades of planets with the participation of 5-6 or all the planets of the solar system occur once every 18 years.

The next time earthlings will see how Mars, Jupiter, Mercury, Venus and Saturn will stand in a row, the so-called lunar crescent will form between the latter.

Earlier it was reported that researchers from the University of Hokkaido in Japan, together with NASA scientists, found two missing units of DNA and RNA. This discovery shows that genetic units can carry asteroids to help develop life from space on Earth.

WHO reports 920 cases of unknown hepatitis in children

Results 24.06: On the brink of disaster and EU assistance