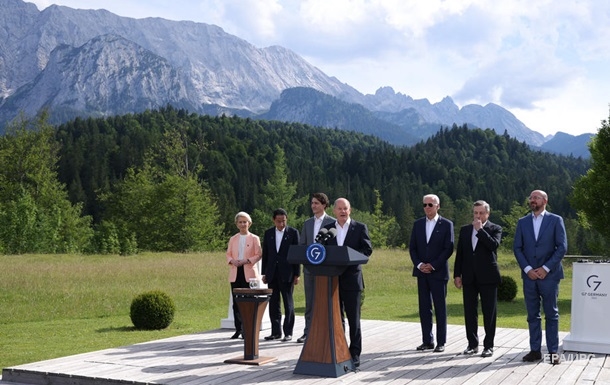 Germany is hosting a G-7 leaders’ summit on Sunday, with leaders from the United States, Canada, Germany, France, Britain, Italy and Japan attending a meeting at Elmau Castle in the Bavarian Alps.

G7 leaders at a summit in Germany ridiculed the “cool” image of Russian dictator Vladimir Putin, remembering his photo shoot on a horse with a naked torso, the agency posted a video on YouTube. AFP.

So, British Prime Minister Boris Johnson, sitting down at the table, asked his colleagues if they would take off their jackets.

So, British Prime Minister Boris Johnson, sitting down at the table, asked his colleagues if they would take off their jackets.

Canadian Prime Minister Justin Trudeau replied that it was better to wait for the official joint photo, and then take off their jackets.

“But we have to show that we are tougher than Putin,” Johnson told him.

Then Trudeau, alluding to the famous photo of the head of the Kremlin, in which he rides a horse without a shirt, added: “We will arrange a demonstration of naked torsos while riding.”

The head of the European Commission, Ursula von der Leyen, said that “horse riding is the best thing in the world.”

Recall that the Leaders of the G7 countries in the final statement of the summit want to announce their commitment to provide unlimited support to Ukraine to protect it against Russian aggression.