In Ecuador, two weeks of national strike are completed with a scenario of national instability. President Guillermo Lasso lifted the state of siege in six provinces, announced a reduction in fuel prices, while the National Assembly discussed a request to remove the president. In response, the Confederation of Indigenous Nationalities (Conaie) said that the announced measures are not enough and the strike continues.

In 14 days of protests and roadblocks, five people were killed and more than 80 detained in confrontation with the National Police, according to lifting of human rights organizations. Control by the Armed Forces was in effect in six provinces since last Monday (20): Cotopaxi, Imbabura, Tungurahua, Chimborazo, Pastaza and Pichincha, where the capital Quito is located, which was under curfew.

Although he lifted the state of emergency, the Ecuadorian president declared that the security forces continue to be authorized to use force “in a progressive manner to restore order and restore tranquility to the citizens”, he declared in a televised broadcast last Sunday night (26). ).

:: In Ecuador, polls indicate that around 56% disapprove of the administration of President Guillermo Lasso ::

The Alliance of Human Rights Organizations published a note accusing the State of committing a massacre against indigenous peoples and other mobilized sectors.

“We repudiate the irresponsible way in which the Executive used the figure of a state of exception […] We reject the stigmatization campaign promoted by the government of Guillermo Lasso”, they write.

“Pronouncement: we reject the irresponsible and illegal use of the figure of a state of exception by the Executive.”

Pope Francis also commented the situation of violence in Ecuador last Sunday (26). “I follow with concern what is happening in Ecuador. I am close to these people and I encourage all parties to abandon violence and extreme positions,” he said.

The United Nations (UN) called for an “urgent dialogue” between the government and strikers. The representative for South America of the Office of the High Commissioner for Human Rights of the UN called for an “exhaustive” investigation of all deaths recorded during the strike. “State agents must act with unrestricted adherence to international human rights norms”, pointed out Jan Jarab.

Lasso claims his package represents an outlay of about $600 million. In addition to reducing the price of diesel and gasoline by 10 cents, the Executive proposes a subsidy of 50% of the price of fertilizers to small farmers; the $5 increase in the Human Development Bonus that will be paid to 1.5 million families; the forgiveness of debts of up to US$ 3 thousand in the Bank of Ecuador.

Last week, the government also met with businessmen and offered a credit of US$ 20 million to cushion the “damage of the strike”. 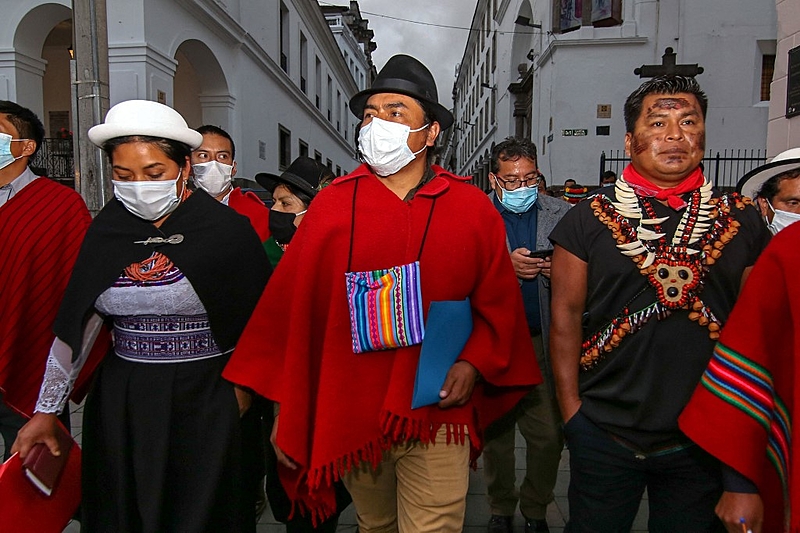 In the center of the image, Leonidas Iza, president of Conaie, who was arrested on the second day of the general strike, accused of “interrupting public services”. / Cristina Vega Rho / AFP

“We will not insist with those who do not want to dialogue, but we also cannot wait to provide the answers that the Ecuadorian people expect so much. We are directly committed to solving all the points on the agenda of our indigenous brothers and peasants, with real results”, he said.

Coanie, which called for a general strike on June 13, and two other indigenous federations signed a communiqué declaring that the announced measures are insufficient and the mobilization continues.

“A decision without guarantees and that is not compatible with the poverty situation of millions of families. The announcement is insufficient and insensitive, however it demonstrates that the struggle of the indigenous movement and other social sectors is bearing fruit”, they publish.

“We take a collective assessment of the announcement made by President Guillermo Laso with our bases to define the way forward.”

With a ten-point platform, Conaie demands the creation of jobs, the prohibition of mining on indigenous lands, the fight against poverty, the resumption of the fuel subsidy policy and the suspension of privatizations.

Since 2019, under the administration of President Lenín Moreno, Ecuador has suspended a fuel subsidy policy, in force for more than 20 years, to adopt parity with international prices – similar to the model applied by Petrobras in Brazil.

While emphasizing his willingness to meet the demands of the striking sectors, Lasso once again criminalized protests. “During the last few days our country has been the target of acts of barbarism and sabotage, none of these crimes will go unpunished, everyone who was involved will be brought to justice. For those who seek chaos, violence and terrorism: the full force of law” , declared.

We assume the commitment to solve the problems of all Ecuadorians. We listen to all social groups and thinking of the common good, we make this decision for the good of Ecuadorians. pic.twitter.com/5Hym7oIQcP

“We are committed to solving the problems of all Ecuadorians. We listen to all social groups and, thinking about the common good, we took this decision for the good of Ecuadorians.”

The new government proposals come at the same time that the National Assembly is discussing a proposal to remove the president and asks for explanations from the ministers of Defense and the Interior about the role of the security forces in containing the strike.

The opposition bench, led by the Union for Hope (UNES), proposed impeaching Lasso for “serious political crisis and internal commotion”. The text was discussed last Friday, after the intervention of 71 parliamentarians, the session was suspended and will resume next Tuesday (27). To be approved, the dismissal must have 92 votes among the 137 parliamentarians in two rounds of voting.

For this Monday’s session, a hearing is scheduled with ministers Patricio Carrillo (Interior) and Luis Lara (Defense) on the action of the military in controlling the acts.

Last week, the armed forces occupied Ecuador’s Casa de Cultura and public universities, which used to be meeting points for indigenous organizations in the city of Quito.

Attack on the shopping and entertainment center of Kremenchug: 10 victims and 50 wounded