The National Program for Education in Agrarian Reform (Pronera) is a federal program that allocates specific funds to provide young people with access to higher education in federal institutions.

It serves young people from rural communities, settled in agrarian reform and assisted by the National Institute for Colonization and Agrarian Reform (Incra). At the Federal University of Pelotas (UFPel), the course offered through the program is Veterinary Medicine, through the so-called Special Classes of Veterinary Medicine (TEMV).

As Professor Luiz Filipe Schuch explains, Pronera covers all groups in which Incra operates, in addition to the settlements: traditional, riverside and quilombola communities can also have access to higher education through the Program. The professor is a professor at the Faculty of Veterinary Medicine at UFPel and works as a teacher for TEMV students.

Read too: What does the end of Pronera mean for the people

In a statement given to the report of the Brasil de Fato RS, he recalls that the discussion for the implementation of TEMV within UFPel started in 2006, within Pronera. At the time, there were already other courses, in other institutions, in different areas. Pronera was created in 1998, during the Fernando Henrique Cardoso government, through a ministerial decree. However, it is only with Law 11,947/2009 and Decree 7,352/2010 (already in Lula’s government) that the Program becomes a regular public policy and gains the dimension it currently has.

According to Incra, from 1998 to 2018, Pronera offered around 500 courses, in partnership with 94 educational institutions, serving approximately 190,000 beneficiaries, from Youth and Adult Education (EJA) to graduate programs. Taking into account its beginnings in 1998, it is possible to say that the Program completed 24 years of existence in 2022, as a result of the mobilization and pressure of organized peasant movements for more access to education. According to Professor Schuch, for the implementation of the Special Classes at UFPel, an “intense legal dispute” was necessary, which took place until 2010. That was when the Court won the case for the university, allowing the beginning of the first class.

Currently, the first and second classes already have their graduates graduated, working as veterinarians. The third class is on the eve of its graduation, which should take place in early July. The fourth class continues their studies, even with the schedule having been crossed by the pandemic. At the same time, initial procedures are underway to arrange for the selection of students in the fifth class. In other words, the program is a success at UFPel.

Characteristics of rural youth justify the existence of Pronera

Regarding the importance of the existence of these Special Classes, the professor opines that the educational formation process of these specific population groups has a series of characteristics that need to be observed. Despite not liking the name “Special Class”, the professor reiterates the need for the Program to exist.

“First, the difficulty in the admission and permanence of sons and daughters of family farming settlers in the university, in the living conditions we have in the country. This has to do with the basic training process that is weakened in rural areas, in addition to the economic support during the period of the course, which is five years”, he maintains.

On the other hand, he recalls that the agrarian reform process also has specificities. “Brazil has a secular deficit in reviewing and reorganizing the situation in the countryside”, explains the professor. In this sense, within an agrarian reform qualification program, the training of human resources at a higher level is very necessary to adequately meet the needs of these regions.

It also emphasizes that the human aspect is a third element that cannot be ignored when evaluating Pronera: offering the possibility of access for rural men and women to an institution that is so distant.

In addition to the personal opportunity to access education, the program offers the course with the support for the organization of their productive activity, as veterinarians, in this case.

“Above all, we must consider that agrarian reform is necessary. The process of training these students, with the quality of this training, is an important return that society as a whole gives to this population”, comments the professor.

Rosicleia Santos is from Rondônia. A student at the 4th TEMV, she says that being able to attend higher education in a federal institution is to reaffirm that the university has to be “painted with people”.

“It is an achievement of the people, which brings a lot of struggle at its root. For me, as a black woman, without land, it is a great joy to also be the protagonist of this story, conquering this space, in this very elite course, knowing that education is a right, but also a duty of the State”, he says.

From where Rosicleia comes from, the opportunity to study makes all the difference, as having a trained veterinarian will strengthen the areas of agrarian reform settlements. He also states that the work he will carry out will help to guarantee sustainability and peasant production, aimed at small farmers.

“It is extremely important to maintain the Special Classes, they play a role of resistance. Every place we go, even when we finish the course, we must have this debate, even to have other classes and that other companions have this opportunity”, says Rosicleia.

Benefits for students and their places of origin

Afonso Campos Souza is better known by the nickname Xiru. He graduated from the 1st Special Class, named Turma Adão Pretto, which started in 2011, titling his students in 2015. He reports that, after graduation, he was able to continue his studies in a specialized master’s degree in agroecosystems, also through Pronera, at Federal University of Santa Catarina (UFSC). From his studies, he can contribute with his work in two cooperatives in the southern region of the state, in the area of ​​milk production. 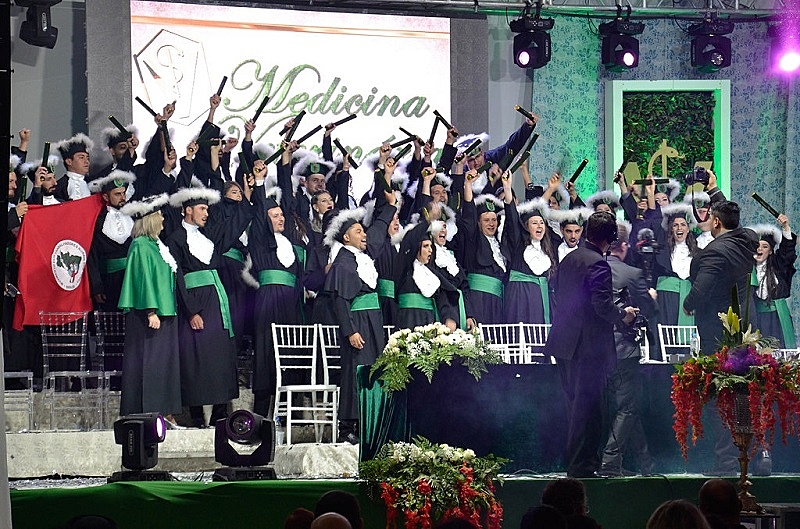 Photo of the graduation of the First Special Class of Veterinary Medicine at Pronera/UFPel / Photo: Maurem Silva

Xiru reports that his specialty is dairy cattle, dealing with large animals and focusing on milk quality and the field clinic. He is currently working on the implementation of a new branch of the Cooperativa dos Assentados de Santana do Livramento (Cooperforte), which is being structured in the region of Candiota, Hulha Negra and Aceguá.

In his view, there are several aspects that demonstrate the importance of the existence of a special program aimed at students from agrarian reform settlements.

“First, access to higher education, especially for people from rural areas and from social movements. For these people who live in settlements and camps, having access to any course is already a great achievement, especially at a federal university”, reports.

In addition, access to the course brings the student closer to sources of knowledge and specific techniques accumulated at the university, reinforces Afonso.

“The importance of mastering the techniques lies in solving everyday problems. In our case, our purpose is to solve problems in the settlements, rural communities, where everyone lives”. In this way, Xiru understands that the benefits of the existence of these groups go beyond the students themselves, extending to their places of origin and work.

Professionals must meet the demands of their communities

Now a postgraduate veterinarian, Xiru explains that the purpose of training TEMV students is to fit in with the demands of the communities themselves.

“There are many challenges. I live in the southern region of RS, with many structural limitations, due to development itself. We see the importance of working on a day-to-day basis, problems happen at any time. , can contribute much more”, he says.

He believes that the experience of the Classes has been positive in this regard, as he believes that there is a balance of productive organization for these locations. In addition, he emphasizes that, in contact with families, professionals also learn, in a relationship in which the scientific knowledge absorbed at the university meets the knowledge developed in the farmers’ struggle for survival.

For him, new Special Classes are very necessary, because the demand is very high. “Veterinary is an area [de trabalho] very broad, whether in an agro-industry, in a cooperative, in the countryside or as a self-employed person. There is still a lot of demand, which is why Pronera is an important instrument to allow these rural people to have access to higher education”, he emphasizes.

For Afonso, observing the trajectory of him and his former colleagues reveals the fact that they would not be able to perform these tasks if they did not have the opportunity arising from the Program, as they are the result of families that would not have financial and even geographical conditions, for living in distant locations.

In the case of TEMV at UFPel, for example, students live in University accommodation, periodically traveling (those who can) to their places of origin. In this way, they can study at the Federal University, even if they are from places where these institutions do not exist.

Another obstacle, cited by Xiru, that these students need to overcome is the psychological barrier. Because they are raised in these places, far from the university, they end up growing up with the mentality that this space is not for them, as if they were intruders.

“Just the fact that people from these communities have access to a higher education course is a very important achievement. Our class is an example of this, we had an individual and collective experience with our colleagues, this experience impacts our technical training”, he said.

The veterinarian also emphasizes that all this was only possible due to the existence of the Program, the result of “a lot of struggle, a long time. [de cada estudante]but the merit is collective”.

WE NEED YOUR SUPPORT

O Brasil de Fato RS does not charge any type of subscription from readers, all our information is free. Therefore, we need your support to continue in the battle of ideas.

The democratization of communication is fundamental for a fairer society.

Uses and abuses of hunger: the case of “lunch box gate” and the gaps in the absence of the State

After Bolsonaro breaks diplomacy, Brazilians in Venezuela will have to vote in Colombia