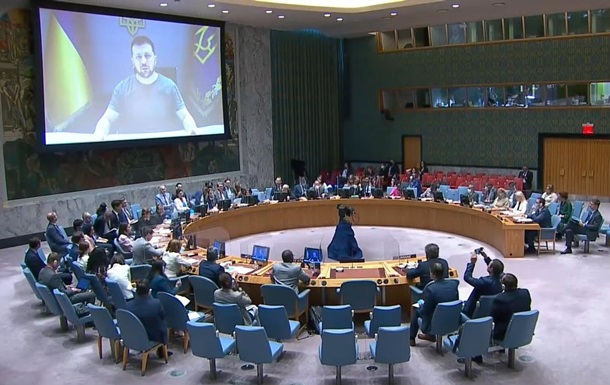 Volodymyr Zelenskyy spoke during a meeting of the UN Security Council

Russia has a permanent seat in the UN Security Council only because of the shortsightedness of politicians at the end of the Cold War, the Ukrainian leader said.

Ukrainian President Volodymyr Zelensky has proposed expelling Russia from the United Nations (UN) Security Council and suspending its membership in the organization’s General Assembly. The Ukrainian leader said this during an address to the participants of a special meeting of the UN Security Council on Tuesday, June 28.

Zelensky recalled that Article 6 of the UN Charter clearly states that any member of the UN that violates the principles set out in the Charter can be expelled from the organization by decision of the General Assembly.

“Although Russia violates the fundamental principles of the UN and the international legal order, it is still not called to account, is present in UN institutions and enjoys the privileges of the UN Security Council,” Zelensky said.

He stressed that Russia remains in the UN and has a permanent seat in the Security Council only because of the shortsightedness of politicians at the end of the Cold War.

According to Zelensky, “Russia does not have the right to participate in the discussions and voting of the organization on the issues of the war in Ukraine, which is not provoked by it and is of a colonial nature.”

“I urge you to deprive a terrorist state of its powers in the UN General Assembly. It is necessary. It is fair. Russia has no right to remain in the UN Security Council,” the president said.

Also, in his opinion, it is fundamentally important to deprive the Russian Federation of the opportunity to manipulate the UN.

“It is necessary to make sure that Russia cannot remain on the UN Security Council while its terrorist activities continue,” he added, stressing that “this is the only logical solution from the point of view of the UN Charter.”

In addition, Zelensky called on the UN to ensure the legal term and status of “terrorist state”.

“The UN should hold Russia accountable for terrorism… It is necessary that an international tribunal investigate the actions of the Russian military,” the President of Ukraine summed up.

Earlier it became known that the UN Security Council will hold a meeting on the war in Ukraine. The theme of the meeting is “maintenance of peace and security in Ukraine.”

Bus drivers announce strike in SP from midnight this Wednesday

WSJ: tanker with oil products from Russia detained in the USA