The street, temporarily or permanently, is home to thousands of men, women and children. At the Federal Districteven in a quick passage through the streets of the city it is possible to observe the increase of people in street situation in the last years, in central regions of the capital the tents and cardboard beds take over some localities.

According to a report prepared by the DF Planning Company (Codeplan), on the Profile of the Homeless Population of the Federal District, about three thousand people live on the streets of the federal capital. Of the total, 42.7% are male and 52.4% are female. In addition, the survey, released in June, counted 244 homeless children or adolescents.

For each number, profile and percentage presented in the survey, there is a face, a name, a story, in general, lives crossed by prejudice, social and economic vulnerability, broken or weakened family ties, addictions, abuse and violence.

José Salustiano, who lived on the streets in the DF for more than two years, says that his story “is the story of many, who at one point in their lives found themselves without the financial means to pay rent and food expenses” and the street was the only alternative.

Moved, Salustiano says that this is a very harsh reality, that in addition to having to live in a situation of social vulnerability, he also suffers from the prejudice of society and the authorities.

“Some people see the homeless as garbage that has to be cleaned and removed from a certain area. But for many, what is missing is a minimum income to support themselves, which can guarantee this right to housing”. 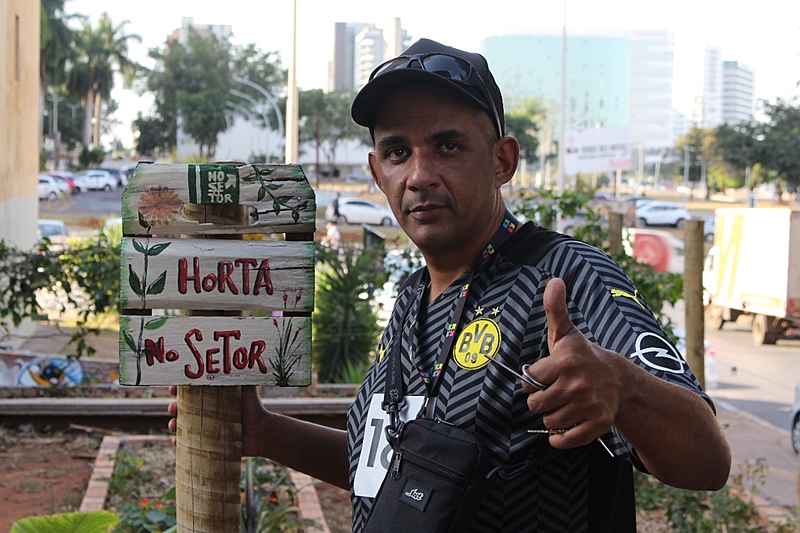 José Salustiano left the streets after getting a job that would guarantee the maintenance of a rent and food. He says life on the streets is very hard. / Photo: Roberta Quintino

Although the aspects that lead people to use the street as a means of housing and livelihood are diverse, Salustiano emphasizes that most of those who are in a vulnerable situation want to work, “come home, treat illnesses, addictions, many want to have an income to be inserted in society in a positive way”.

However, he emphasizes that it is not just taking the person off the street “and putting them anywhere, but providing a minimum of dignity. Systematic monitoring of individual situations is necessary, because if you treat the street population as a group that thinks in a single way, with a single type of public policy, this change will not happen. You cannot come with a social framework and want that person to fit into a single policy,” he notes.

For the general coordinator of Instituto No Setor, Felipe Velloso, the pandemic, accompanied by the economic crisis, increased the number of homeless people in the Federal District.

Velloso assesses that, although there are serious public policies and the efforts of various sectors of the State to serve this population group, “there is a problem of poor dimensioning of the service provided to the homeless population, which is already overloaded. It takes twice as much structure to serve people,” he stresses.

The coordinator’s perception is proven in numbers. The Codeplan survey reveals that 38.2% of the vulnerable population have taken to the streets since the beginning of the pandemic, that is, 2 years ago or less. In addition, the Administrative Region with the highest concentration of people is in the Plano Piloto, about 25% of the total.

Maria Francisca de Freitas has been on the streets with her partner for four years and currently lives in the South Commercial Sector. She says she intends to get off the street and “start a new life, but it’s a little difficult,” she says.

The Maranhão, who recently started working as a cleaning assistant, is betting on a change in life. “For my future, I want to be with my children in my house, with my husband”.

:: Homeless and without food: in the country’s capital, only donations save families from hunger ::

Like Freitas, almost three-quarters of respondents to the survey always think about getting off the street (74%). The main needs mentioned to get off the street are employment or income (62.3%) and housing (34.4%).

For her, the government “can do more” for the homeless, such as improving access to housing programs and expanding existing benefits.

According to the Department of Social Development (Sedes), “the pure and simple granting of benefits does not guarantee adequate employment for the recipient. Therefore, the ministry clarifies that it acts broadly in serving this public”.

“There are cases in which the citizen in that situation just needs recovery of the family bond, or referral to health policies, or assistance to return to the state of origin”, informs the folder.

People living on the streets are constantly targets of a criminalizing and prejudiced narrative, which points out the subjects of this population group as dangerous and social undesirables. The reproduction of this discourse, influenced by a view of urban hygiene, enhances the criminalization and invisibility of the homeless population, and the exception becomes the rule.

Last May, a video of a case of aggression in the South Commercial Sector between two homeless people and a store employee in the region was widely circulated. According to some homeless people, who prefer not to be identified, the episode is an isolated case. However, the repercussion of the case brought “an even more prejudiced look on the part of people”.

For Felipe Velloso, who works directly in the South Commercial Sector, “no case of aggression is legal, people already lose their reason at that moment. But we see that it is not a common case and there was already a conflicting relationship between people. But what worries me most is the sensationalism and generalization of the group, since it is very heterogeneous”.

No Setor’s social coordinator, Theresa Raquel Miranda, points out that some store owners in the region create cooperation strategies to deal with the homeless population.

“However, others still feel threatened and maintain either distance or conflicting relationships with the population that lives there. We cannot fail to consider that there are indeed tensions in these relationships, which are very much based on the social constructions we make of the homeless population and the social place they occupy”.

For Salustiano, the lack of an effective, “affectionate and humanized” action by the State in relation to the homeless population, “makes that, in some way, who pays for the situation is the merchant who is here, who lives with this social injustice , with the lack of more direct monitoring by the authorities”, he says. “They want people to have an education, mental health and a peaceful way of living, but how is it possible in the face of so much aggression, neglect and humiliation? asks the former homeless man.

According to information from the Intersectoral Committee for Follow-up and Monitoring of the National Policy for the Homeless Population (Ciamp-Rua), in 2008, there were around 50,000 homeless people in the 75 largest Brazilian cities.

The most recent study by the Institute for Applied Economic Research (IPEA) indicates that the homeless population in March 2020 was approximately 222,000 Brazilians.

"A warning to organizations around the world." The United States imposed sanctions against a private company from Uzbekistan for the supply of chips to Russia