After 18 days of national strike, the Confederation of Indigenous Nationalities of Ecuador and four other organizations announced this Thursday (30) that they had reached an agreement with the government to end the strike. The parties agreed to lower the price of gasoline, repeal the fuel price parity policy, and lift the roadblocks.

“We cannot be irresponsible to the country, so our issues must be resolved today,” these the president of Conaie, Leonidas Iza Salazar, announcing the end of the strike.

After two days of dialogue and the temporary suspension of negotiations by the management of Guillermo Lasso, the pact was signed this Thursday afternoon, in the auditorium of the Ecuadorian Episcopal Conference, in Quito, by the president of Conaie, Leonidas Iza Salazar and the minister of Government, Francisco Jimenez.

The agreement calls for the government to reduce the price of gasoline and diesel by 15 cents, guarantee a 50% subsidy on the value of fertilizers to small farmers and repeal Executive Decree 95, which determines the policy of parity of international prices for hydrocarbons. – similar to that adopted by Petrobras since the Temer government. Lasso’s administration also promised to reform Decree 151, which opens loopholes for mining in indigenous territory.

With this, Conaie and the National Confederation of Peasant, Indigenous and Black Organizations (Fenocin), of the Council of Evangelical Peoples and Indigenous Organizations of Ecuador (Feine) pledged to lift the road blocks and return to their territories. All parties committed to resuming the dialogue table within 90 days to reassess the implementation of the indigenous movement’s ten-point agenda of demands.

Read also: Leader of the Indigenous Confederation of Ecuador is released after 24 hours and will respond to the process in freedom

On Monday, President Lasso had announced a $5 increase in the Human Development Bonus paid to 1.5 million families; and doubling the budget for bilingual cultural education (Spanish – indigenous languages).

The Lasso government had also announced US$ 20 million in credits to 35 businessmen to alleviate losses generated by the strike. Quito City Hall indica that the national stoppage generated shortages and about US$ 19.6 million in trade losses.

The negotiation only took place after the government defeated the impeachment request defended by the opposition bench in the National Assembly. The deputies of the Union for Hope (UNES) defended the dismissal of Guillermo Lasso due to the political crisis unleashed in the country. However, in a vote held last Wednesday (29), they were supported by only 80 deputies. It took 92 votes out of 137 parliamentarians to shorten Lasso’s government. 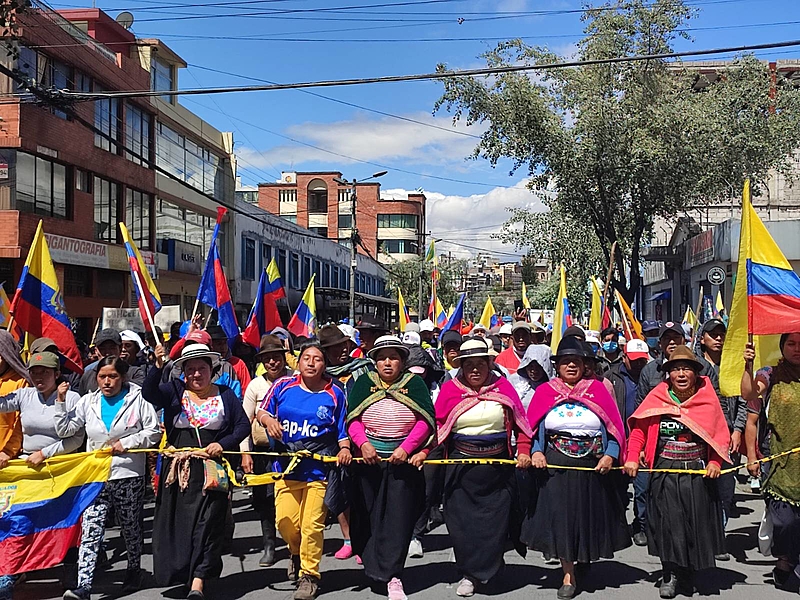 Indigenous women are on the front lines of protests in Quito, capital of Ecuador, pushing for an agreement with the government / Alliance DDHH

On June 13, the Confederation of Indigenous Nationalities (Conaie) convened a national demonstration demanding a list of ten points, which included the reduction of fuel prices, the end of mining in indigenous territory, resumption of the subsidy policy, generation of employment, greater public investment in sectors such as health and education, in addition to the guarantee that new sectors of the economy will not be privatized.

In 18 days of strike, there were six dead, 331 injured and 152 people arrested, according to lifting of human rights organizations. In addition, last Wednesday, Guillermo Lasso declared a state of exception in four provinces: Azuay, Imbabura, Sucumbíos and Orellana.

Last Tuesday, the government even suspended its participation in the dialogue tables after the death of a military sergeant.