The Inter-American Court of Human Rights (IACHR) began the trial of the Brazilian State in the case of the murder of landless rural worker Antônio Tavares. The hearing took place this Monday (27) and Tuesday (28), in Costa Rica. The case took place in 2000 and, in addition to the fatal victim, left 185 other people injured. At the hearing, Tavares’ wife, a witness who was injured, representatives of organizations that defend victims and representatives of the State were heard.

The crime took place on Highway BR-227, in Campo Largo (PR), during a march for agrarian reform. The Military Police violently repressed the demonstration by peasants from the Landless Rural Workers Movement (MST).

Since 2014, the complainants originating in the case – Terra de Direitos, the Pastoral Land Commission (CPT), Justiça Global, MST and the National Network of Lawyers and Popular Lawyers (Renap) – have started negotiations to try to find a solution with the Brazilian State, but were all frustrated.

As all possibilities in the national justice system had been exhausted, the petitioners requested that the case be referred to the IACHR. In February 2021, the jurisdiction of the Inter-American Court accepted the case.

Maria Sebastiana, widow of Antônio Tavares, when questioned in person at the Court, reaffirmed that even after so long, she is still awaiting justice and hopes that no other family will suffer.

“It’s very difficult, it’s been 22 years fighting for justice. And now having to leave my country to claim something that is right… I hope that no worker dies for defending rights. No other family goes through what we go through to this day,” she said during the hearing.

When asked about the support of the State since the death of her husband, she stated that there never was.

“We never had help from the beginning. The body was transferred with the help of the [ex-]deputy Dr. little pink [PT]. Then, about the investigations, I only found out about the movement’s lawyers. We had an appeal that came from a lawsuit filed in court and we had a minimum wage to share among three children up to the age of 25. Now, there is no more,” he said.

Sebastiana also said that her children’s lives were impacted. “It was very difficult, there is no way to describe it. Everyone got sick, some had to stop studying to help around the house, another had depression,” she reported.

“The cops called me a slut”

Just as the life of Antônio Tavares’ family was severely impacted, so was the life of farmer Loreci Lisboa. As a witness at the hearing, she recounted the assaults she suffered that day.

“The first thing I felt was a gunshot to the head, which I still have a hole in. Then I took three shots: one in the leg, one in the arm and one in the buttock. I was already lying on the floor, they told the dog to bite and called us a slut”, she recalled.

Loreci was unable to walk for months, with a small daughter and with the help of her mother to bathe her, among other activities.

On the day of the crime, the peasant woman witnessed the death of Antônio Tavares. “When a certain moment came, a policeman had a gun in his hand, and he was punching everyone. When we saw it, that shot came out and soon after, Mr. Antônio Tavares fell to the ground and was soon rescued by whoever could. The police continued to beat him to the ground,” he concluded.

Despite the evidence of authorship of the shot that killed peasant Antonio Tavares, police officer Joel de Lima was acquitted in Military Justice.

After a complaint was made by the Public Ministry, a criminal action was initiated by the state justice. However, the Court of Justice ended the criminal case on the grounds that the case had already been closed by the Military Justice. The Attorney General’s Office did not appeal the decision. As a result, both the murder of the peasant and the aggression against the 185 remain unpunished.

State representatives who participated in the hearing did not deny that the shooting and the attacks came from the PM. They stated, however, that all necessary help has already been provided to the family.

The organizations representing the victims reaffirmed the request that the Inter-American Court condemn the Brazilian State. 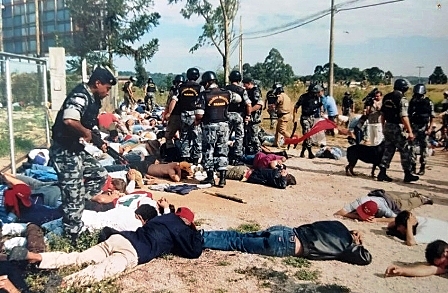 Antônio Tavares was killed and 185 members of the MST were wounded by the military police in a march for agrarian reform, in 2000 / Arquivo APP Sindicato

The lawyer and MST activist, Josiane Grossklaus, spoke on behalf of the movement saying that, in addition to the reparation for the family of Tavares and other injured peasants, historical reparation is also expected with the implementation of the agrarian reform.

“For the MST, agrarian reform is the main reparation for Antônio Tavares and so many other men and women fallen in the struggle for land. The expectation of the victims is that the State will be held accountable for such serious violations of human rights”, he concluded.

At the end of the hearing, a period of July 29 was granted for the parties to present their final written arguments, also containing information and details that may be requested by the Court.

The Antônio Tavares case is the third to be analyzed by the Inter-American Court’s jurisdiction involving landless rural workers. In 2009, the Court found Brazil guilty of not holding those involved in the murder of Sétimo Garibaldi, a farmer killed in 1998 during an illegal eviction from an MST camp in Querência do Norte, also in Paraná. In the same year, the Court also condemned Brazil for the use of illegal telephone interceptions in 1999 against rural workers’ associations linked to the MST, also in Paraná.

*With information from Terra de Direitos