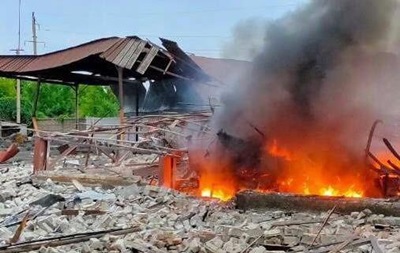 Consequences of a missile strike

In Zelenodolsk, the enemy hit an agricultural enterprise. The explosion caused a fire that destroyed the granary.

In the Krivoy Rog district of the Dnipropetrovsk region, a warehouse with 40 tons of grain was destroyed as a result of shelling by the Russian army. About this on Thursday, June 30, informed head of the Dnepropetrovsk OVA Valentin Reznichenko.

He spoke about the ongoing shelling of towns and villages in the Krivoy Rog region. So, in the morning, the enemy fired at the Zelenodolsk community several times from different weapons, and in the big Kostroma, the blow fell on the center of the village. There are destruction.

“In Zelenodolsk, the enemy hit an agricultural enterprise. He destroyed a warehouse in which there were 40 tons of grain. The explosion caused a fire. Previously, people were not injured,” Reznichenko wrote.

He added that other areas of the region are calm for the moment.

Earlier it was reported that the enemy hit the territory of the Krivoy Rog TPP. One of the rockets hit the building of a transport company and damaged more than three dozen cars.

Russian strike on the Dnieper: the bodies of a man and a woman were found

The organizer of a holiday for the children of Ukrainian refugees was detained in Belarus. The event was dispersed by the police.

Lisichansk is wiped off the face of the Earth - Gaidai