After a two-year break due to the pandemic, the LGBTQI+ Pride Parade of the Federal District is back. In its 23rd edition, the event is one of the oldest in the country and aims to bring together thousands of people this Sunday (3), with a concentration starting at 2 pm at the National Congress, in Brasília.

“It’s a time when people in our community, who have historically been forced to hide in ghettos and closets, can go out onto the streets without fear, claim their rights and cry out the pride of being who they are. It is a great power, which empowers many people”, points out the executive producer of Festival Brasília Pride, Igor Albuquerque.

In this edition the theme is “Our 122 rights: Knowing, Making, Defending”. “The idea is that we make a positive campaign to praise all the rights we have already conquered. We at Brasília Pride, through the Faculty of Public Law (IDP), carried out an unprecedented survey that discovered the existence of 78 federal and 44 district norms that guarantee rights to our community. And it is necessary to communicate this so that everyone can claim their rights”, points out Igor.

In the last edition, held in 2019, the Parade gathered more than 120 thousand people. “Our movement is important to give visibility to the entire LGBTIQI+ population of the DF and Brazil. Since the Brasilia march is not only one of the oldest, but it is also the third largest in the country”, completes Melissa Navarro, co-founder of the Lesbian Feminist Association of Brasília Coturno de Vênus.

With a diverse program, the event will feature six electric trios, which will cover different niches of LGBT culture. One of these cars will be commanded by Coletivo Rebu and Associação Coturno de Vênus, which also includes culture.

“We will have DJs, drag art and performances. We want to promote a safe, inclusive cultural event that promotes well-being and hospitality, which is the main agenda of Coletivo Rebu”, says Rafaella Ferrugem, DJ and cultural producer.

Several collectives, movements and non-governmental organizations will be on the march this Sunday. One of these is Mothers for Diversity, which works in the DF for equal civil rights for the entire LGBTQIAP+ society.

“My history in the movement began in 2011 when I participated in an exhibition at Praça XV, in Rio de Janeiro, together with my lesbian daughters. Afterwards, I never stopped because the results of the struggles are the result of the hard work of militancy and that often has It’s a large network that works together to seek the legitimization of rights for the LGBTQIAP+ population”, says Monica de Freitas Monteiro, coordinator of Mothers for Diversity in the DF and surroundings.

The Distrito Drag collective will also be present at the event. “We highly value the LGBT parade for being one of the main street acts. It is at the top of the biggest actions that have ever taken place in the country’s capital. No other direct action had as many people as the LGBT parade, which is political and engaged. it’s just a party, but it’s not. However, of course we celebrate our existence, but we need to change the scenario, because the current one affects us”, highlights Hony Sobrinho, creator of drag queen Rojava, who is director and one of the founders of Coletivo.

Five monumental places in Brasília received artistic installations, this is the Mapa do Pride.

The facade of the National Theater was colored with fabrics, the skylight in the foyer of the Central Metro Station received the installation of ribbons called “the tree of pride”, the ramp of the National Museum of the Republic and the Staircase of the TV Tower were plastered. And, finally, it is possible to observe the interactive work with portals on the shores of the Parque da Cidade lake. All interventions were performed in the colors of the rainbow. 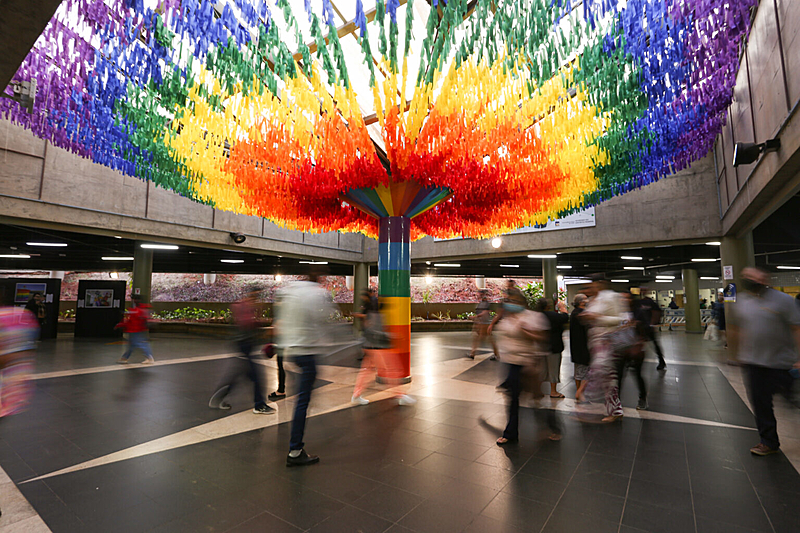 “The Pride Map was created during the Pandemic so that during the period of isolation/social distancing, LGBTs could move around the city and express pride, in open spaces, without agglomerations. that the city is also for the LGBT person and made by them. We also make Brasília and the city needs to welcome and defend the diversity of sexual orientation and gender identity”, highlights Igor Albuquerque.

After complaint in Brasil de Fato, municipality of Paraná is sentenced to indemnify indigenous people

Media as a platform: police candidacies double in 2022 elections