Is another public safety model possible? The question that opens this report is answered from the creation of the Popular Forum for Public Security. A space that brings together 34 civil society organizations, universities and collectives from Rio de Janeiro willing to make the knowledge of the black territories of favelas and periphery protagonists in the construction of a State that guarantees the life and rights of the population that lives together daily. with police violence.

The Forum was launched last Wednesday (29) at the University of the State of Rio de Janeiro (Uerj) and brought together representatives of civil society working in the area of ​​Human Rights, as well as favela residents and family members of victims of violence in the been at an event that featured debate tables and also a symbolic act in honor of those killed by the police. 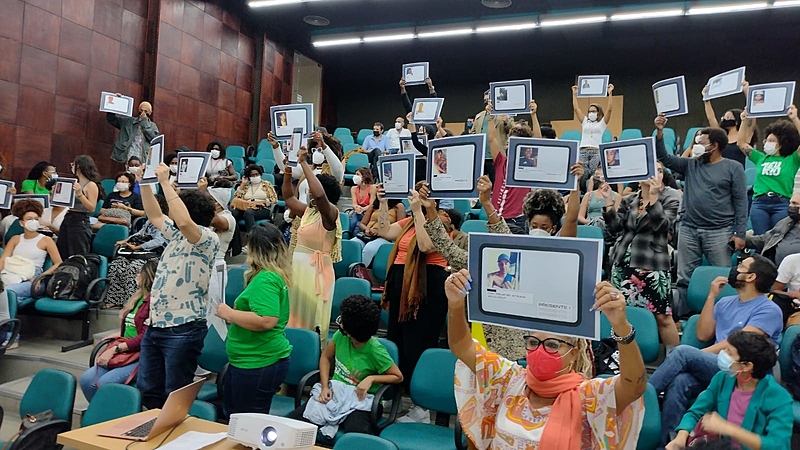 The Forum’s launch manifesto criticizes various social sectors, including academia. According to the document, over the years the university determined public security as a category and not as an object of analysis, thus corroborating the idea that public security is restricted to the police and the need or lack of it, if thus distancing themselves from popular spaces of mobilization.

The letter also points out the ineffectiveness of the Public Ministry of Rio de Janeiro (MP-RJ) which, according to the document, does not exercise the constitutional role of external control of the police.

In the Forum’s understanding, the current public security system is a producer of mass deaths and incarceration, mainly affecting the black population.

For Buba Aguiar, a resident of the Acari favela, in the North Zone of Rio, and one of the founders of the Fala Akari collective, the Forum is an opportunity for the periphery to stop being an object of study and also to act in the production of knowledge.

“We need to produce this data, be in these spaces of production, of counting these numbers. A space like this Forum is more than urgent, which is for us to be in, but hacking these debates, bringing our experience, our history, our look at this data, which is not only institutional, academic, but of experience as well, of care for how to produce, when to exhibit, to think about whether certain exhibitions are necessary”, he says.

Read more: Researchers explain why massacres like the one in Penha are not effective in fighting crime

Fransérgio Goulart, coordinator of the Right to Memory and Racial Justice Initiative, emphasizes the importance of the Forum to expand articulation with other sectors of society.

“The Forum was born from this perspective of mobilizing other actors and groups to carry out this discussion, this confrontation with the State. Public security is not just a debate of human rights organizations, it is not just a debate of certain social movements, we have to bring people from culture, education, people who discuss mobility, the right to the city to this debate”, details.

In this first moment, the Popular Public Security Forum will hold agendas in communities in the Baixada Fluminense, in the favelas of Maré, Alemão and Jacarezinho and in the municipalities of São Gonçalo, in the metropolitan region of Rio, and in Cabo Frio, in the Lagos region.

“Until the end of the year, our main task is to continue dialoguing with society, but from these territories, because as was said here, these are the places that will design a public security policy that preserves lives and builds well-being. ”, says Fransérgio, who also remembers the challenge of mobilization.

“In some territories we will have to start a process of sensitization of actors who are afraid to discuss and it is understandable, the State is this: this machine of violating rights and the police is this tool”, he emphasizes.

Read more: Family from Jacarezinho (RJ) returns to live in a house invaded by PMs from the Integrated City project

The Forum will act on three axes of work: mobilization/training, political advocacy and knowledge production. At the organization website you can find the list of all participating organizations and more information about the proposal. Activists and institutions interested in taking part in the initiative can send an email to [email protected]

“It will be in emotion”, says political scientist Camila Rocha about definition in the first round

Lula has already won in New Zealand, the beginning of voting in Brazil has no record of occurrences

João Pedro Stédile, from the MST: “We have to combine institutional struggle with mass struggle”

Off the coast of Bulgaria, a naval mine was destroyed