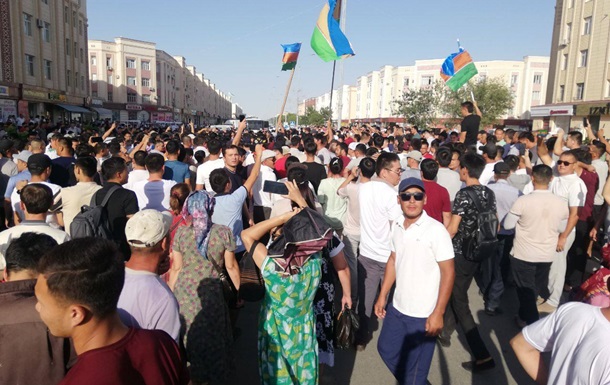 Protests in Uzbekistan against amendments to the Constitution

The sovereign status of the region – Karakalpakstan and its right to secede from the republic are excluded from the new version of the Constitution.

Residents of the Republic of Karakalpakstan, which is part of Uzbekistan, on June 1 went to mass protests against changes in the Constitution of Uzbekistan. Earlier, the president of Uzbekistan, following the example of Putin, decided to “reset” and at the same time deprive the country’s largest region of the right to secede from Uzbekistan.

In Uzbekistan, the sovereign status of Karakalpakstan and its right to secede from the republic are excluded from the new version of the Constitution. This caused outrage among the residents of the region. Radio Free Europe / Radio Liberty.

Thousands of people gathered in the center of Nukus, the capital of Karakalpakstan, as evidenced by the video published on local Telegram channels. There, people coordinate joint actions.

Let us recall that earlier thousands of people gathered in the center of Tbilisi for actions in support of Georgia’s European integration under the slogan Home, to Europe.

Norway will provide Ukraine with a billion euros