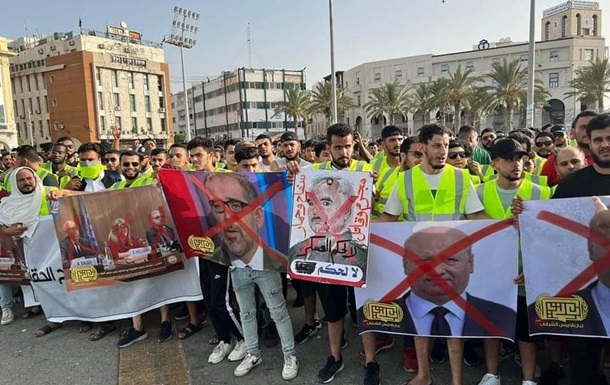 Libyans demand the dissolution of all government bodies

Among the activists’ demands is to declare a state of emergency in the country and resolve the electricity crisis.

In Libya on Friday, July 1, large-scale protests began. The protesters demand the dissolution of power and the holding of new elections. About it informs Reuters.

Thus, the demonstrators attacked and set fire to the building of the House of Representatives in the city of Tobruk and went to the most massive protest in Tripoli.

“In the current difficult political and social conditions, the youth demand from the Presidential Council to dissolve all government bodies, declare a state of emergency in the country, resolve the electricity crisis, expedite the holding of elections and achieve the withdrawal of foreign mercenaries from the country,” the agency quoted the protesters as saying.


The city from which the two contending Prime Ministers hail, Misrata, is also witnessing protests over living conditions.

One can only hope the latest developments in #Libya will be heeded as a wake-up call to right the course of its transition.

The status quo is unsustainable. pic.twitter.com/Ug9LlWIPCK

As reported, in February, unknown people fired at the car of Libyan Prime Minister Abdul Hamid al-Dabaiba in Tripoli. The attempt was made after the head of government rejected the parliament’s decision to appoint a new prime minister at the head of the country’s transitional government.


Not only Ukraine. What conflicts to expect in 2022