The government increased the payment and commitment of the rapporteur’s budget amendments in June, the month in which the Constitutional Amendment Proposal (PEC) 1/2022, the Auxílios PEC, was voted on in the Senate. The rapporteur’s amendments are part of the infamous secret budget, since they do not identify the parliamentarians benefiting from the release of public resources.

According to a survey by the NGO Contas Abertas, last month was the champion in payments for amendments of this type. Until the last day 27, it was about R$ 4.9 billion, almost ten times the amount paid in the previous month. 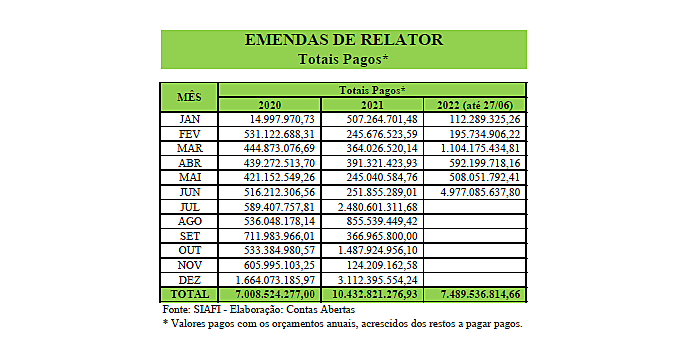 Worksheet shows payments of amendments by the rapporteur in June / Reproduction

Since 2020, when this type of amendment gained relevance mainly after the political alignment of President Jair Bolsonaro (PL) and the so-called Centrão parties, the month with the highest payment had been December 2021, with R$ 3.1 billion. The June payout was 58% higher.

:: Government and Lira maneuver to approve Aid PEC this week ::

In the case of commitments – promises of payment –, the value also increased. It was R$ 6.7 billion last month against R$ 29 million in May.

In the last ten days of June alone, precisely during the period in which the PEC was voted on in the Senate, R$ 4.6 billion were committed. This is approximately 60% of all that was committed this year. 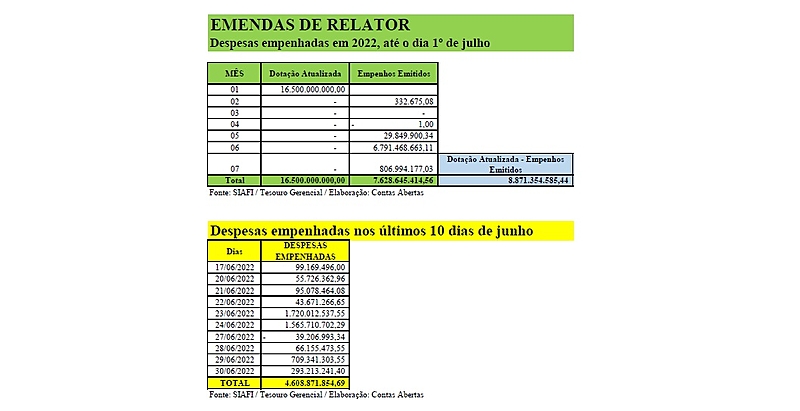 Spreadsheet shows the rapporteur’s efforts to amend in June / Reproduction

The PEC dos Auxílios proposes to use about BRL 41 billion public coffers to increase benefits paid by the federal government months before the election, which is prohibited by legislation. The proposal is a bet by Bolsonaro to try to defeat former president Luiz Inácio Lula da Silva (PT) at the polls and obtain another presidential term.

The proposal was approved in the Senate on the 30th and is being analyzed in the Chamber of Deputies, where it can be voted on this week.

Gil Castello Branco, economist and executive director of Contas Abertas, says that the release of the secret budget on the eve of an important vote in the National Congress and months before the election indicates the purchase of political support.

According to him, with electoral polls pointing to a defeat by Bolsonaro for Lula, the government tends to use all the artifices to maintain its support base in parliament. Parliamentarians, on the other hand, tend to demand more and more from the government to support them.

:: With an eye on the election, Bolsonaro copies Lula’s actions ::

“The ‘cost of political support’ for a president who, according to polls, will lose the elections in three months, is increasing,” he said.

Castello Branco also said that the rapporteur’s amendments do not always serve to pay for works or purchases planned and discussed democratically. Even so, they involve considerable amounts, which can benefit Bolsonaro electorally.

“Amendments are distributed without criteria, without socio-economic parameters, to benefit very preferably those parliamentarians who are close to the government”, he explained. “These amendments will continue and will be an instrument of electoral pressure, which may even generate an imbalance in the election.”

Arestovich explained whether the Russian Federation can capture Odessa