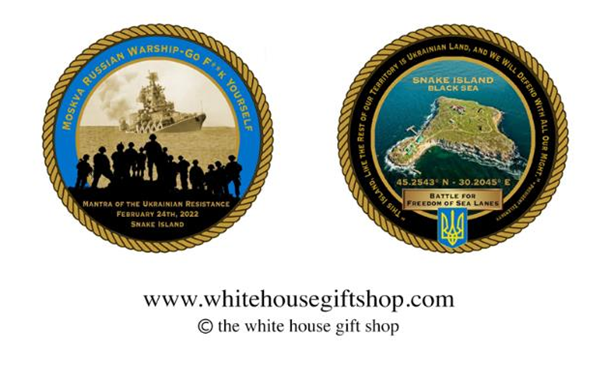 The value of the coin is $100. 20% of all sales proceeds will go to Ukrainian women and children through the White House Gift Shop.

The White House souvenir shop has released a collector’s coin in honor of the defenders of the Ukrainian Serpent’s Island. About it informs White House store.

Each coin will have a certificate with the edition number and a velvet presentation case with a golden presidential seal.

You can already pre-order with delivery from September 30, 2022. Delivery to Ukraine and all NATO countries is free.

The value of the coin is $100. 20% of all sales proceeds will go to Ukrainian women and children through the White House Gift Shop.

Recall that the Russian invaders tried to strike at the liberated Snake Island. The enemy also conducted reconnaissance in order to prevent the installation of the Ukrainian flag.

As reported, the Armed Forces of Ukraine have been striking at Zmeiny for the past few weeks.

However, already on June 30, the Russians left the island after another shelling. The Ministry of Defense of the Russian Federation called the flight of its military “a gesture of good will.”

The Polish Foreign Ministry condemned the destruction of the graves of soldiers of the Home Army in the Grodno region of Belarus: "This will not erase the memory of the past"