The Popular Mobilization Committee of Lomba do Pinheiro will be inaugurated this Wednesday (6), at 7 pm, at the Santa Clara Parish Gymnasium (Stop 10), in Porto Alegre (RS). The Committee will be a structure to bring together different experiences of popular organization in the region, located in the East zone of the Capital. The inauguration activity will count on the presence of João Pedro Stedile, militant of the Landless Rural Workers Movement (MST).

As Saraí Brixner, a resident of the region and member of the Committee to Combat Hunger and Against the Virus, explains, in the Lomba do Pinheiro region the work of popular organization is very intense. Among the organizations that operate in the territory, the Popular Council stands out mainly, which brings together several initiatives, including the Committee to Combat Hunger, of which it is a member. She also explains that the community is very engaged in various demands, such as in the area of ​​health, transport, infrastructure, water service, etc.

Read too: Stedile: “Agrarian reform and agroecology are the great solutions to end hunger”

“It’s a region with a lot of social struggle”, he explains, stressing that the pandemic period also required strong articulation of the local population. At the moment, mainly through the community kitchens.

“The kitchens are not just community, we call them solidarity kitchens and even kitchens of hope, where people could get their plate of food and clothes, in addition to having help with Emergency Assistance. Today people also have access to reinforcement classes . The kitchens have become a point of reference for citizenship”, he comments. 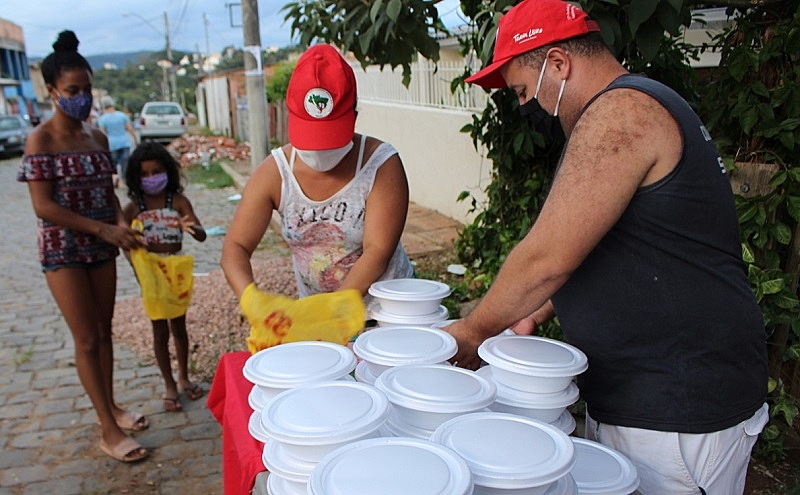 Community kitchens were fundamental during the pandemic / Photo: Maiara Rauber

About the Popular Committee that will be inaugurated, he notes that the community organized itself in order to build, around each of the solidarity kitchens, a “Struggle Committee”, to organize the claims and demands of the many localities of Lomba. However, from the discussions held mainly in the Popular Council, when observing the territory of Lomba do Pinheiro, it was realized that it was necessary to build a Committee that centralized these experiences, including to enhance and support the localized committees.

It also welcomes the participation of João Pedro Stedile in the event, invited based on the relationship established between the local community and the MST, which actively participated in the solidarity campaigns promoted by the Committee to Combat Hunger, guaranteeing tons of food donated by the farming families in the settlements. directly to Lomba’s kitchens.

Another community leader in the region is Professor Acir Paloschi, also active in the Popular Council. As he reports, the community movement in the region has always fought for policies of inclusion and income generation, with a commitment to fighting hunger and poverty. In addition, the committees created over the years seek to organize the struggles of residents, pressing for public policies necessary for the region.

Also a resident of the region, Maristela Maffei reinforces the complexity of the neighborhood, divided into approximately 40 communities, identified by the bus stops, forming a “big geographic bug”. According to the city of Porto Alegre, in 2018 calculations, the region had about 60 thousand inhabitants.

Maristela also recalls that popular organization in the region dates back to the 1980s. The town where she lives belonged to Viamão until 1992, being annexed to Porto Alegre this year. Maristela, who has already been a councilor in the Capital for three terms, still remembers the Union of Vilas da Lomba do Pinheiro, an organization that no longer exists and which today gives rise to the Popular Council.

“The struggle in Lomba was never solitary. We organize ourselves to fulfill the role that the State does not fulfill at the moment”, says Maristela.

In Kazakhstan, when testing a pipe at the Tengiz field, an explosion occurred, there are dead and injured