“Love of planting”: women expand agroecology in areas impacted by the Suape complex

In the community of Ilha de Mercês, in Ipojuca (PE), it is quilombola women who build agroecology.

“More and more I am creating more love. Love to plant, to see that little plant grow, which was all the result of her work”, points out farmer Rosilda Fátima de Abreu Silva.

Access to healthy food without pesticides, once a great challenge, has become a reality for the 268 families of the traditional community.

The transformation came through the community garden, the result of the Women and Fruits of the Earth project: Building Agroecology and Food and Nutritional Security, a partnership between the Suape Espaço Socioambiental Forum and the Sabiá Center for Agroecology.

The objective of the initiative, which emerged during the pandemic, is to rescue the traditional knowledge that allowed food sovereignty of entire communities, today impacted by the Suape Industrial Complex, on the south coast of Pernambuco.

“After the project, there are no more pesticides, in vegetables, in food. Brings health to our lives, huh? Our children”, explains the quilombola Maria Auxiliadora da Silva. 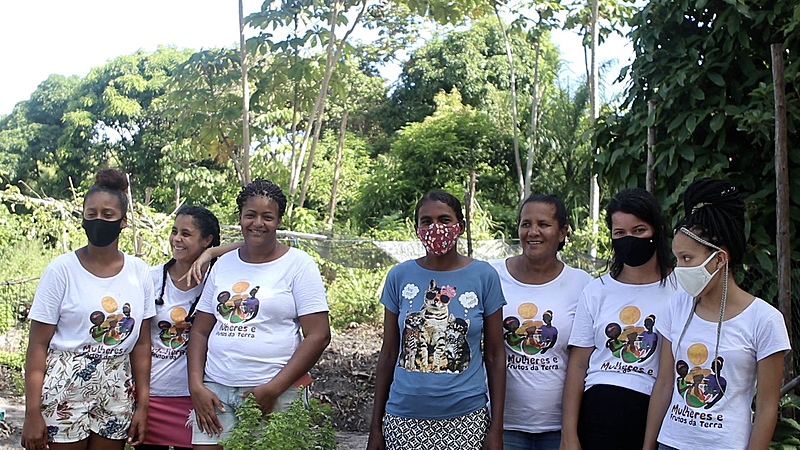 It all started with cleaning the land, handpicked by the collective of 12 women. Before the initiative, the group did not know techniques to help with cultivation, which ended up discouraging agriculture among them.

Tomatoes and peppers were already planted, but lettuce, for example, was only incorporated after the teachings.

“For me, I thought that this was simply finding a piece of land and making a little hole and planting the seed and that was it. But it’s not like that, we have to manage the land, we have to prepare, we have to be careful with irrigation”, explains Rosilda

“This here is all women, women warriors, one helps the other, and we are reaching our goal”, completes the peasant woman.

Suape and the environmental impacts 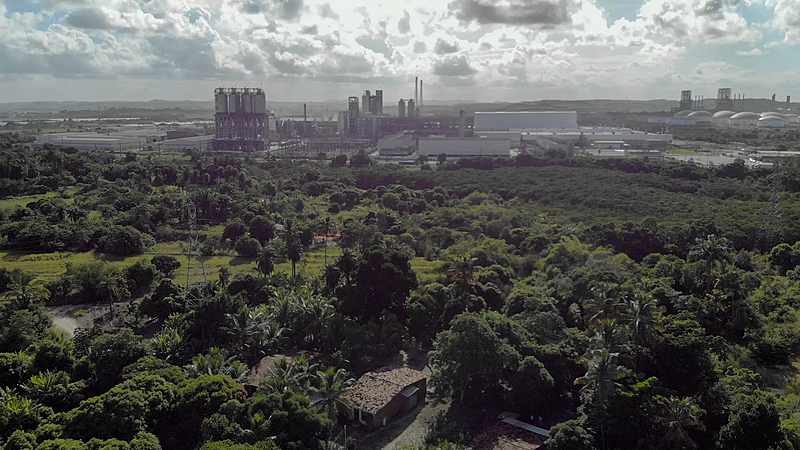 Titled in 2017 by Incra, the quilombola territory is surrounded by the industrial complex of Suape.

The Tatuoca River, which borders the community, historically generates income for families through artisanal fishing.

But a dam built by Suape cut the connection between the river and the sea, killing trees and countless species of fish, molluscs and crustaceans. The water began to have a dark bottom, with oil on the surface.

The obstruction that was supposed to be temporary lasts until today, more than 14 years after the work, and continues to threaten the traditional way of life. As a result, families complain that they have difficulties selling fish and struggle to keep the mangroves alive. During the pandemic, the situation only got worse.

Born and raised in the quilombo, Denise da Silva has 10 siblings. Her father grew cassava. And he also had income from fishing. Everyone helped.

“My father would put the shrimp net, we would go to school, my brother and I, then he would say, come home from school, eat and come help me. He never slept hungry, but we worked hard to be able to eat,” he recalls. 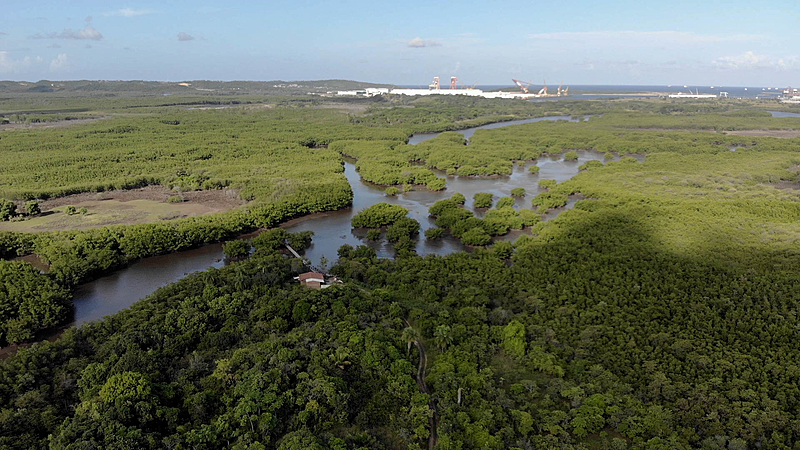 25 km from Merces, another community garden led by women is in full swing. It is in the community of Engenho Ilha, in the municipality of Cabo de Santo Agostinho.

When the project arrived, it was Veralúcia Domingos who exposed to the Sabiá Center and the Suape Forum, what was needed to improve the infrastructure and make cultivation possible.

“We needed support, tools, conditions to structure the garden, umbrellas, irrigation, because here we have a problem with water. We don’t have running water, the artesian well to dig was expensive, so we needed all that and that’s what the project offered us”, says the President of the Ponte dos Carvalhos Farmers Association (PE)

The community garden, which started with 12 women, stimulated the cultivation of vegetables, which was still uncommon among them. Another learning experience was the use of sowing. Gracielle Martins da Silva used to throw the seeds straight into the ground to germinate.

“I love agriculture, I was born in the land. He understands? And so far, I haven’t given up farming for nothing. On duty, we put the seed in the ground and it bears a lot of fruit. That delights me,” she argues. 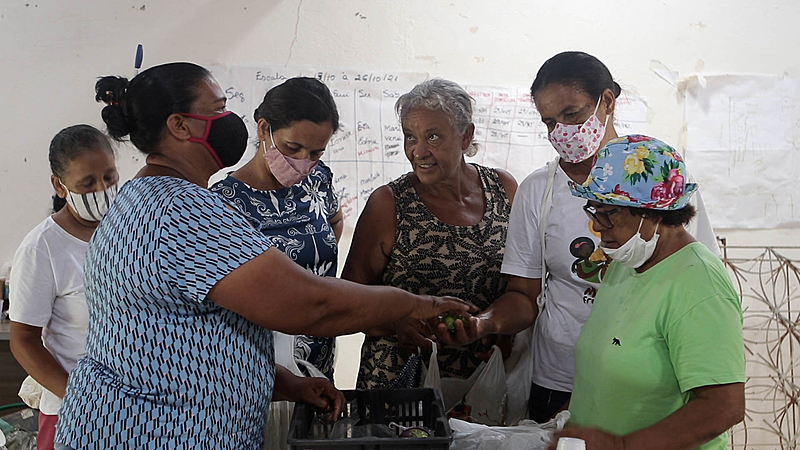 The farmers organize themselves in collective efforts and weekly meetings at the Association’s headquarters. They also take turns on a daily scale to tend the garden. At the end of the harvest, everything is divided. And the surplus is donated to other families in Engenho Ilha.

“Everything I plant from the land is for consumption and to donate”, highlights Maria Gomes da Silva.

Located behind Reserva do Paiva, a luxury condominium by the sea, Engenho Ilha is a disputed land.

The origin of the area comes from the resistance of 24 families who worked at the Bom Jesus plant and were fired, without compensation. They remained in the territory, still taken over by sugarcane plantations.

Today, there are 305 families, including farmers, fishermen and extractivists. Many have been there for four generations. One of the central struggles is for the preservation of João Grande, a dense area of ​​Atlantic forest and closed mangroves. 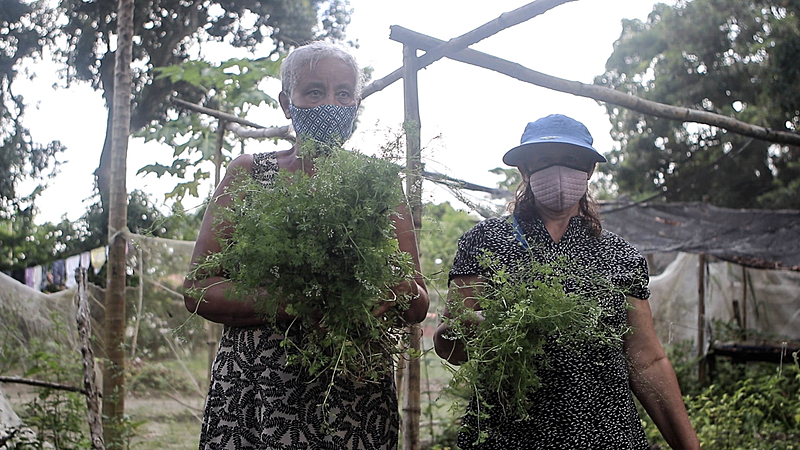 “This project came to bring, rescue, signify this issue with our ancestry. I’m always in the mood to tell them ‘oh it’s important that we bring what our grandparents used to do’. The way to make coconut oil to use both in everyday life and for medicinal use, sitz baths for skin problems that you may have, how do you use herbs. So all this was rescued”, explains Veralúcia.

“This is gypsy spine. This is for coughing, for inflammation. Even for whooping cough this works here. It’s an herb. It doesn’t hurt,” he says.

the trail of development

In 2008, the Suape Complex generated 46,700 new jobs in Pernambuco, playing a decisive role in increasing the state’s GDP by 3.4%.

At the time, Suape was considered one of the pillars of the country’s economic development.

But all the investment also generated socio-environmental impacts. When the Complex was installed, in the 1970s, there was no survey of the populations that lived within the industrial perimeter.

The region has 13,500 hectares and 147 companies installed, and more than 59% of the entire extension of the Suape perimeter are areas of Atlantic Forest, sandbanks and mangroves.

The survival and cultural reproduction of these traditional communities depend on the preservation of this territory.