PCB and UP signal alliance, but PSOL’s arrival is difficult in Pernambuco

In the coming days, the Popular Unity (UP) party of Pernambuco should announce its support for the candidacy of Jones Manoel (PCB) for the State Government. The UP’s priority will be campaigns for state and federal deputy, in addition to the Presidency of the Republic. The Brazilian Communist Party, on the other hand, sees the name of historian and social worker Jones Manoel as strategic in the dispute for the state Executive. There is still the possibility of a composition with the PSOL-Rede federation, but this scenario is difficult.

On July 20th, the legal period begins in which parties and party federations must hold their conventions, where they must confirm their majority and proportional candidacies, as well as alliances. The convention period lasts for two weeks, until the 5th of August. At the end of the period, an alliance should be formalized between the UP and the PCB in Pernambuco.

The Popular Unit defined, in a plenary session held in early June, that it would give centrality to proportional campaigns. At the meeting, the party defined that it would not run for the State Government, leaving open the possibility of composition with João Arnaldo (PSOL) or Jones Manoel (PCB). “We do not seek majority candidates. We are in dialogue with the PSOL and PCB in a proposal of unity of the left”, summarized a leader of the UP in contact with the Brazil de facto.

The party’s pre-candidate is federal deputy and nurse Ludmila Outtes, licensed president of the Pernambuco Nurses Union (SEEPE); as well as pre-candidates for state deputies Natália Lúcia, an activist in the Movimento de Luta dos Bairros e Favelas (MLB); and popular lawyer Rafael Wanderley. In addition to the three candidacies, the UP has invested heavily in the campaign of its presidential candidate Leonardo Pericles.

Read too: “We are going to surprise a lot of people”, says Jones Manoel, pre-candidate for the Government of Pernambuco

And, it seems, the dialogue advanced even with the PCB’s candidacy. “The trend is an alliance between the PCB and the UP. They will support our candidacy without the need to nominate vice. The focus is on the debate on the political program of the ticket. In the coming days, there should be a public announcement about the progress of these negotiations”, confirmed Jones Manoel to the BdF. It is still unclear who will run for the Senate. The PCB candidate still harbors hopes of attracting another ally. “By signing this alliance, we hope to be able to formalize a ‘left front’ with the PSOL,” he says.

PSOL must not give up its head – and not even Lula

Although the parties involved – PCB and PSOL, in addition to the UP itself – want a joint plate of the three forces, the decision on the plate head is a complicating element. The PCB considers it important to test the name of Jones, 32, who in recent years has gained national notoriety in the left-wing online environment. It is an important time for the party to present its agenda through a prominent spokesperson. But the party does not have radio and TV time or access to party funds.

The PSOL, on the other hand, has a structure “ready” for the race, with radio and TV time, access to public funds from the party fund and a more competitive slate of deputies. That’s why the party defined, at the end of 2021, that it would have majority candidacies: João Arnaldo for governor and Eugênia Lima for senator.

The PSOL also defined that it would go ahead with the candidacy of Lula (PT) for president of the Republic – while PCB and UP have their own candidates for the Planalto (Sofia Manzano and Leonardo Péricles, respectively). “The PSOL knows that it can grow with the vote linked to Lula and this is the best flow for them. They hardly open their ticket to another party”, says an influential activist from the Network, a party that is linked to the PSOL through federation.

Read too: Understand what the new party federations are and how they impact the dispute in Pernambuco

:: Who starts ahead for 2022? Find out which parties are the strongest in Pernambuco::

A few days before the convention period, the state president of the PSOL avoids designing a possible composition. “The local scenario is still undefined and depends a lot on the movements of the parties that are disputing the spectrum of the left. There is still a lot going on”, says Tiago Paraíba in conversation with the BdF. “Back then, we affirmed the need to build unity on the left, but understanding the dynamics of each party and their circumstances. We are evaluating the best way”, he disagrees.

In the PCB, Jones Manoel’s tone is that, leaving in separate candidacies, PCB and PSOL will not achieve the expected incidence in the electoral debate. “Separated, the tendency is to compete for the same votes in the left field. A unit is needed if we want to have a chance to go to the second round”, says the pre-candidate. In this composition, Manoel states that “on the part of the PCB, the priority is the unity of the left, not self-construction” and, therefore, they would be willing to discuss who would get the head of the plate.

But your analysis is that your name should be tested. “PSOL is a party that has been in the majority dispute for 20 years, it has more structure, visibility, money, more pre-candidates that serve as electoral cables. And, even so, we are still tied with PSOL both in spontaneous and stimulated”, he evaluates, also mentioning a “boycott” that the commercial press would be doing to his name and image.

The president of PSOL points out that the majority candidates of the party were defined in a party congress. “These changes depend on a lot of talking,” he says. “Our position is not closed, but they are candidates that have been consolidated, that are already working, running around the state. João and Eugênia fulfill an important task in this scenario for our organization as a party”, says Paraíba, signaling that the party must not give up the names. 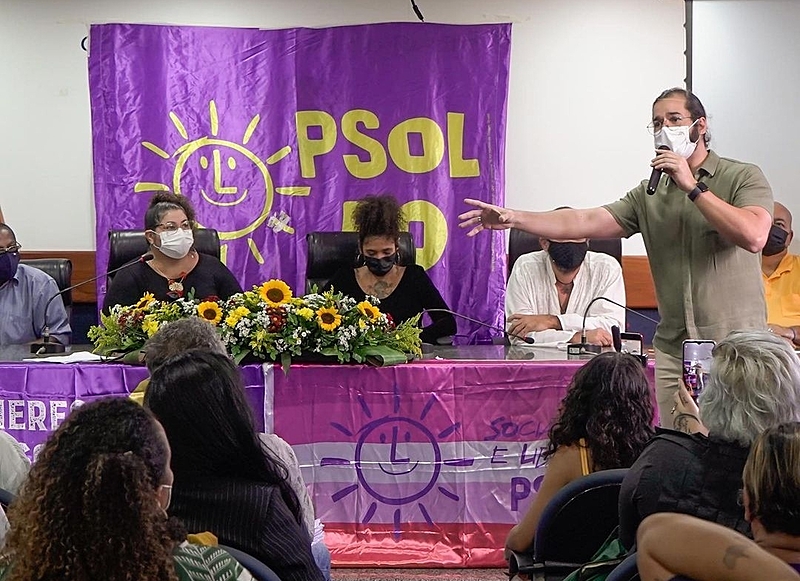 In Pernambuco, PSOL seeks to maintain its seat in the Legislative Assembly of Pernambuco (Alepe), won in 2014 with Edilson Silva and renewed in 2018 with the Juntas. As for the Federal Chamber, the strongest name of the PSOL-Rede federation is Túlio Gadêlha. In 2018 he won 75,600 votes, while the PSOL had 77,500. The expectation is that the federation exceeds the electoral coefficients for both Alepe (90,000 votes) and the Federal Chamber (150,000), with the possibility of winning yet another seat in Alepe or in the Chamber.

The federation of PSOL with the Network, formalized in recent months, is another element that deserves to be highlighted in terms of electoral positioning. The parties will be linked for the next four years. The PSOL has the majority to make decisions and “rules” the group – including generating complaints from the Network for “difficulties” in the relationship with the PSOL. Despite having taken a step to the left in recent years, Rede Sustentabilidade does not present itself as a left, much less socialist. In this sense, the PSOL “dragging” the Network to support the PCB could erode the relationship at the very beginning.

We are no longer waiting for aviation, give us air defense - Zelensky