Genial/Quaest survey in São Paulo released this Thursday morning (7) shows the former mayor of São Paulo and former minister of Education Fernando Haddad (PT) in the lead in the dispute for the state government. In two of the scenarios analyzed, without Márcio França (PSB), he has more voting intentions than his opponents combined, configuring victory in the first round.

In one of the scenarios, Haddad reaches 35%, with former Minister of Infrastructure Tarcísio de Freitas (Republicans), reaching 15%, in a situation of a technical tie with the current governor, Rodrigo Garcia (PSDB), who has 14%. Felicio Ramuth (PSD) and Vinicius Poit (New) have 2% each. Whites and nulls are 24% and did not know or did not want to give an opinion, totaling 12%. Added together, PT’s opponents reach 30%.

In another scenario, without Felicio Ramuth (his party, the PSD, defined support for Tarcísio) and Vinicius Poit, Haddad reaches 38%, against 15% for Tarcísio de Freitas and 14% for Rodrigo Garcia (PSDB). In the scenario with France, the former Minister of Education also leads, with 29% against 18% for the former governor of São Paulo. Tarcísio has 12% in this scenario, with Garcia reaching 8%. 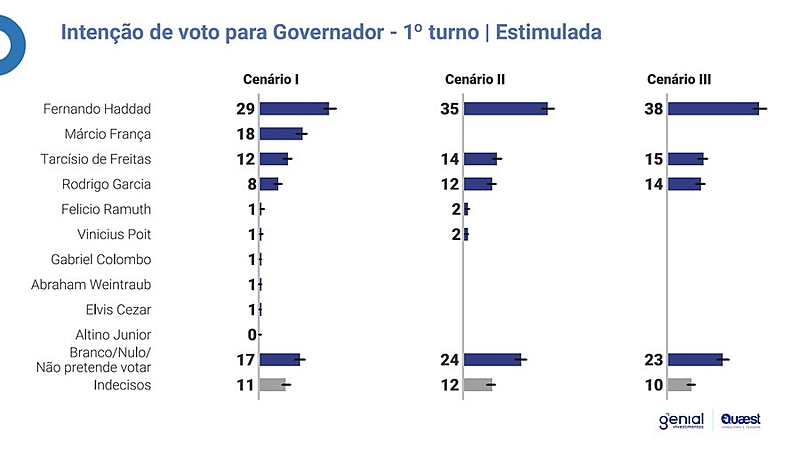 The latest survey carried out by Quaest on the dispute for the São Paulo government, released on May 12, indicated a growth of six points for Haddad in two months, reaching 30% at the time, against 17% for Márcio França. Tarcísio de Freitas had 10% of the electorate’s preference and the current governor Rodrigo Garcia, with 5% of the voting intentions.

The Quaest survey was carried out between the 1st and 4th of July and registered with the Superior Electoral Court (TSE) under the numbers BR-03964/2022 and SP-05318/2022. A total of 1,640 personal, home and face-to-face interviews were carried out.

Quaest: Lula grows and reaches 30 points of distance between the beneficiaries of Aid Brazil

PE: New report will be produced on the cause of death of an indigenous elderly man approached at home by the PM