When he turned 38, designer Alê Aguasanitaria understood that he was gay. Looking for aesthetic references on the internet, he came across images of shirtless men and felt provoked.

“I got really pissed off and reported the photos. Every photo of a man that appeared, I reported it to Pinterest. I looked at those photos and it started messing with me. : ‘Holy shit, I’m gay’.”

The delayed sensation has a long explanation. “I didn’t have a normal childhood, I spent my life at school being bullied, they called me ‘faggot’, ‘bichinha’ and ‘boiola’. But the bullying I suffered at home, from my father, was ten times worse, my Dad has always been a douchebag.”

For much of his life, Aguasanitaria suffered from the violence imposed by his father, who tried to stop his son’s homosexuality. “It’s bizarre, how my parents and siblings knew I was gay and I didn’t know? Can you imagine the level of psychological violence I suffered so that I didn’t know?”, she says.

“My father did everything for me not to have a normal adolescence, I could only go to church. There at church, they always said that God was going to put a woman in my life, so I thought that if it didn’t work out, I thought I I hadn’t found the right woman. I lived in compulsory heteronormativity”, he recalls.

When the family space didn’t seem to be enough to stop Aguasanitaria’s desire, the family turned to religion. “At age 15, a church leader put his hand on my head to drive out the spirit of homosexuality. At no point in my teens did I entertain the idea of ​​being gay, did I know it was wrong.”

Today, at 44, Aguasanitaria lives alone and has not spoken to his father for six years, who left after his son made his sexuality public, and rarely sees his mother. The designer is one of 365 respondents to the survey “Between ‘cures’ and ‘therapies’: Efforts to ‘correct’ the sexual orientation and gender identity of LGBTQIA+ people in Brazil”, produced by All Out and Instituto Matizes.

The survey found 26 formats of “gay healing” in Brazil. Anelise Fróes, PhD in Social Anthropology and Research Coordinator at Instituto Matizes, prefers to say that the use of this term was chosen because “it facilitates communication, people understand more quickly, but in fact, it is about ‘points of correction'”.

“When we find so many different ways of doing the same thing, we understand how easy it is to encapsulate people, how easy it is to lose people in a trap, so that they don’t realize what is happening”, he maintains. 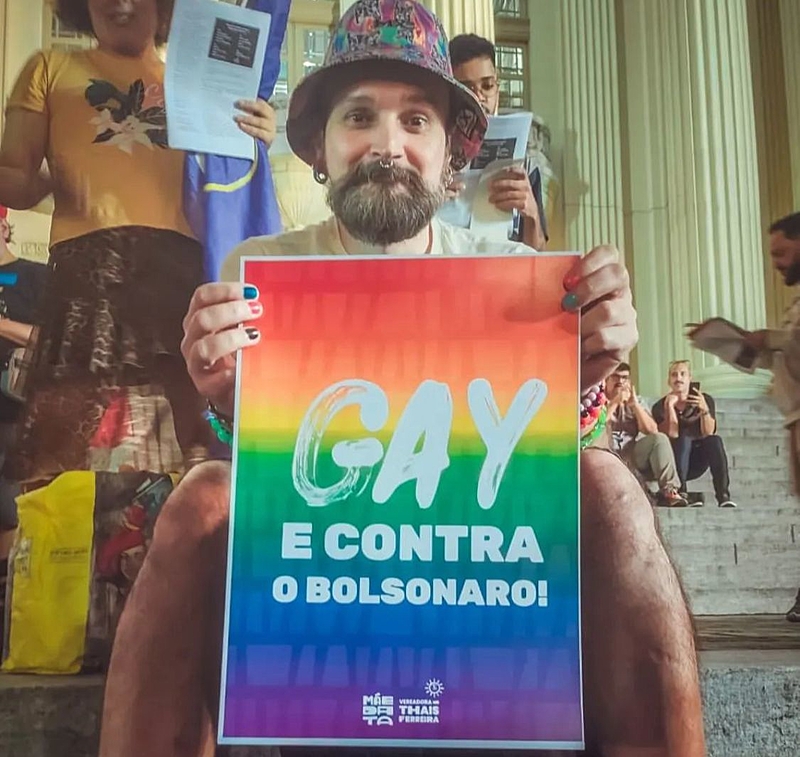 Encapsulated, Aguasanitaria from a very early age understood, in the world created by his family, that being gay was something terrible. “I look back at my childhood, I remember playing with a teddy bear and it was wrong. I remember being eight years old, watching a television commercial for dolls. I wanted those dolls, but in my head I knew no one could know from that.”

As a teenager, the designer was even prevented from working by his family and saw his father planning his professional future in areas that were far from his ambitions. “They did everything they could to not have access to the outside world. My father even planned that I would work at home, in his mechanic shop, in the back of our house. The standard is for parents to expel their (gay) children. My parents, no, they preferred to lock me in the house, deprive me of the world, so that I wouldn’t become me”.

In the research, the 26 formats of “gay cure”, or “attempted sexual correction”, as the study text prefers, are divided into four axes: mental, religious, family and school health.

The exorcism ritual to which Aguasanitaria was subjected is one of the methods reported by survey respondents who were subjected to “gay healing” processes in a religious context.

In addition, the study lists threats and prophecies, when pastors present an uncertain future for homosexuals, in hell, for contradicting God; confessions and counseling, which take place in meetings, retreats, camps and with a vow of silence; participation in rituals, subjecting the person to different types of prayers and prayers, such as passing anointed oil on the body, using animal blood on the body, spiritual unloading sessions; and through punishment, subjecting those punished to carrying weight, rubbing pepper on their fingers, using wristbands, in addition to having their hands and arms tied.

“We need to understand that, in general, a wrong behavior by external forces is attributed to the subject, not only to him, it is not his desire or his identity, it is something that is making you wrong. it can have other names, such as ‘demon’, ‘satan’ or an ‘African-based entity'”, explains Anelise Fróes.

Aguasanitaria remembers experiencing a similar situation. “It never crossed my mind that it was possible to be gay, the church taught me that to be gay was to be possessed by the devil. They even said that in religions of African origin, there were LGBT people because they were possessed by demons.”

In the research, there are reports of psychological violence imposed in family circles as well, when relatives threaten compulsory hospitalization, call religious people to prayer at home, force the consumption of medicines and hormones, among others.

The search for psychological help, made by the family or by the patient himself, is also common. In this format, the research identified “regression treatments, exorcism techniques in Christian psychologists’ offices, family constellation treatment, disobsession therapy, and posture and voice adequacy treatment.”

In the final text of the survey, the group of researchers asks that “actions and strategies capable of amplifying and massifying the appreciation and affirmation about the recognition of sexual orientations and diverse gender identities” be created. They also demand that these efforts be “directed to the whole of society, in an unrestricted way, and especially to young people, in order to discourage violence based on gender identity and sexual orientation, also aiming to ensure respect for the recognition and self-determination of each person .”

Where are blacks and women in Rio de Janeiro’s candidacies?