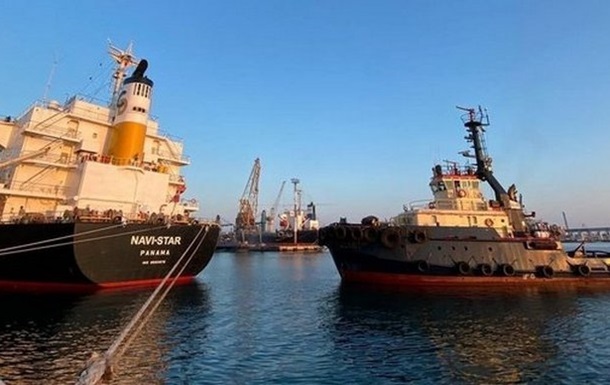 The first caravan of ships with Ukrainian grain left the ports of Greater Odessa; The world economy will lose $1 trillion due to the Russian invasion of Ukraine. Perild.com highlights the main events of yesterday.


The first caravan of ships with grain left the Ukrainian ports

The first caravan of ships with Ukrainian grain left the ports of Ukraine. Three bulk carriers NAVI STAR, ROJEN and POLARNET carry 57,000 tons of corn on board, bound for Turkey, the UK and Ireland. Further, Ukraine plans to ensure the ability of ports to handle more than 100 ships per month.


Experts worsened their forecasts for the global economy

A full-scale Russian invasion of Ukraine will cause the global economy to lose one trillion dollars in 2022. The new forecast suggests that the fighting will continue until the end of the year. As a result, global growth forecast worsened by 1.1 percentage points to 2.8% year on year. Among the G20 countries, Russia, the sub-sanctioned aggressor country, will lose the most GDP. By the end of 2022, it is estimated that its economy will fall by 10% under the pressure of sanctions, compared to their initial growth estimate of 2.6%. The Ukrainian economy is experiencing an even greater blow. In April, the World Bank estimated that it would fall by 45% this year.


Products in the world are getting cheaper

As a result of July, world food prices declined. This is the fifth month in a row since the all-time high in March. Thus, the FAO price index for sugar fell by 3.8% compared to June amid concerns about the prospects for demand caused by expectations of a further slowdown in the global economy. The FAO Dairy Price Index was down 2.5% from June amid weak trading activity, but was still 25.4% above July 2021 on average.


Putin and Erdogan held a meeting

Turkish President Recep Tayyip Erdogan and Kremlin head Vladimir Putin agreed to start partial payments in rubles for Russian gas supplies to Turkey. The parties also agreed to increase the volume of trade between the Russian Federation and Turkey, meet the expectations of both sides on energy issues, and increase interaction between the Russian Federation and Turkey in the transport sector, industry, agriculture, and construction.

In Nikolaev, a curfew was introduced for a period of two days. It will be valid from 23.00 August 5 to 5.00 August 8. At this time, military personnel and law enforcement agencies will work to identify collaborators and sabotage groups.


In Britain, due to abnormal heat for the first time in history, the sources of the River Thames dried up

After prolonged dry weather, the source of the Thames in Gloucestershire dried up. The meteorological office said the heat and dry weather showed no signs of easing, with little rain forecast for next week and temperatures above average, especially in the south, but well below record midsummer temperatures.

The Ukrainian government approved the decree of President Volodymyr Zelensky on the transfer of 903 objects belonging to Russia to Ukraine and the Ukrainian people. Kyiv intends to convert these assets into funds that will be directed to the defense and restoration of the country. The next step should be the confiscation of Russian assets in the West.


SBU launched a service to search for prisoners of war

The Joint Center for the Search and Release of Prisoners has introduced a quick form for filing statements about missing Ukrainians during the war, as well as those captured by the invaders. Citizens who previously applied to the Joint Center do not need to re-fill out the electronic form – the information provided has already been processed.


Ministry of Digital Development launches free training for IT specialists

It is noted that soon those who wish will be able to apply for IT Generation. This project will allow Ukrainians to get a free education and start their career in the IT field. There is a list of different specialties to choose from.


Islamic Jihad hits Israel in retaliation for attacks on Gaza

The Palestinian terrorist organization Islamic Jihad launched a massive rocket attack on southern Israel. According to Israeli media, the militants responded to Israel today’s attacks on the Gaza Strip and the elimination of their leader in the late afternoon. In about 20 minutes, Islamic Jihad fired at least 50 rockets into Israel.

Family of 10 killed in US fire