This Sunday (7), Gustavo Petro and Francia Márquez assumed the presidency of Colombia for the next four years. The act was accompanied by around 200,000 people in Plaza Bolivar, in the center of Bogotá, where the headquarters of the three powers are located. “We are going to make Colombia more egalitarian for all,” said the new ruler upon taking office.

The vice-president, Francia Márquez, took office in front of the president. In taking her oath, the lawyer and environmental activist paid tribute to her ancestors and said she will work “until dignity becomes customary”.

Petro was sworn in by Senate President Roy Barreras of the Liberal Party, who placed a dove brooch on Petro’s presidential sash “symbolizing total peace”.

“It’s a historic break. In Colombia, social mobilization has turned into power, thanks to peace and despite the war. Petro’s triumph shows that political violence has no purpose.

Barreras also reiterated that “there is a homeland ready to be reborn to share a common destiny with other sister Latin American nations”.

The ceremony was adapted in response to requests from the new heads of state, who did not want a red carpet to enter Congress. They also included the sword of the liberator of Latin America, Simón Bolivar, marking the 203 years of the country’s independence, which is also celebrated this August 7th.

There was also the presence of social leaders from the Pacific region, as guests of honor, and the transmission of a video telling the story of the victims of the Colombian armed conflict.

:: New Colombian Congress takes over with a presidency aligned with the government of Gustavo Petro ::

In his inaugural speech, the new president highlighted some projects he had already announced during the campaign, such as tax reform to increase taxes on the richest; the full implementation of the Peace Agreements, signed in 2016; and a foreign policy that prioritizes relations with Latin American neighbors.

Petro classified social inequality as an aberration and highlighted that he intends to carry out a project that “zero hunger in the country”. For this he called for national unity. “We are going to build a national agreement that guarantees a new Colombia. I will not be caught in the curtains of bureaucracy,” he said. 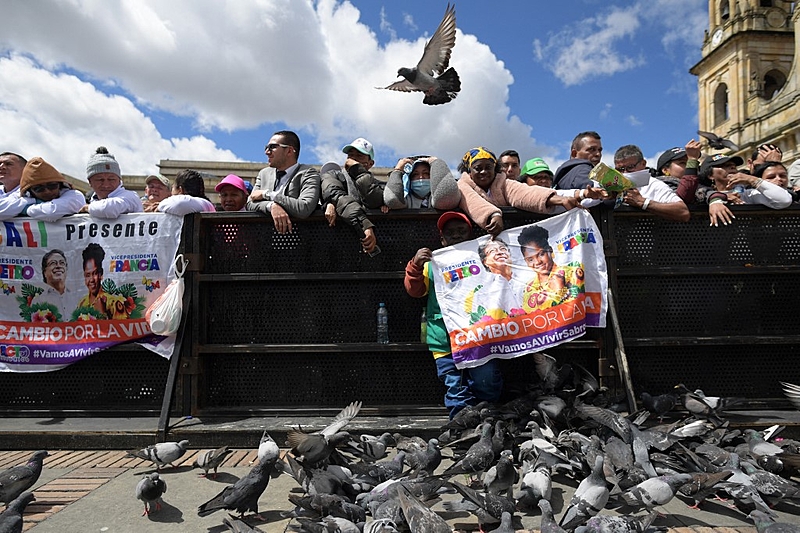 One of the central promises of the new government is to guarantee the “total peace” of Colombia, resuming negotiations with the National Liberation Army, implementing the 2016 Peace Accords and promoting peace dialogues and victim reparation structures at the local level.

The new president promised to follow “to the letter” the recommendations of the Truth Commission, which delivered its final report last month, denouncing that the five decades of conflict caused 800,000 deaths.

“We cannot continue in the country of death, we have to build the country of life. We will work tirelessly to bring peace and tranquility to every corner of Colombia. For peace to be possible, we need to dialogue”, he declared.

:: Understand the challenges for peace accords in Colombia after the presidential elections ::

The head of the UN peacekeeping mission in Colombia, Carlos Ruiz Massieu, said he was optimistic about the new Colombian president.

“It is an important change, particularly for peace, to rescue and accelerate the implementation of the Agreement in areas that are transformative and that need greater encouragement, such as rural reform, political reform and security in the territories, with the presence of the State and fighting inequality, common in conflict-affected areas,” said the local media.

“It’s time for a new international convention that accepts that the war on drugs has failed disastrously. It has left a million Latin Americans murdered, most of them Colombians, in the last 70 years,” he said.

“I reaffirmed my commitment to continue supporting peace in your country, we need an active Colombia on the path to Latin American integration,” said Fernández, who also highlighted bilateral interest in the food, automotive, agricultural, pharmaceutical and service sectors in general.

I met with @petrogustavowho today assumes as president of Colombia 🇨🇴.

I reaffirmed my commitment to continue supporting peace in your country, we need an active Colombia on the path of Latin American integration. pic.twitter.com/eXQcjILkzV

arc too highlighted interests in increasing cooperation between Bolivia and Colombia. “We have a long way to go, as two fraternal peoples willing to advance on the new route to strengthen trade relations and in defense of the environment”, he pointed out.

Accompanied by his deputy, Francia Márquez, Petro also spoke with the interim executive secretary of the Economic Commission for Latin America and the Caribbean (ECLAC), Mario Cimoli.

“We talked about energy transition and industrial policy. We appreciate your willingness to strengthen production, sustainability and guarantee productive inclusion in Colombia and the region”, published Francia.

We met with Mario Cimoli, Acting Executive Secretary of ECLAC. We talked about the energy transition and industrial policy. We appreciate your willingness to strengthen production, sustainability and guarantee productive inclusion in Colombia and the region. pic.twitter.com/baFdqIbiMl

Of the total of 18 ministers, Gustavo Petro has already nominated 14 names. This Sunday, he announced four other high-ranking members, including geographer Irene Vélez for the Ministry of Mines and Energy.

Former athlete and Olympic weightlifting champion Maria Isabel Urrutía will be the Minister of Sport. Urrutía was a congressman from 2002 to 2010.

The Ministry of Labor will be in charge of the Communist Party, with former senator Gloria Ramírez.