Porto Alegre joins the demonstrations taking place this Thursday (11), in cities from north to south of the country, in defense of democracy and free elections. The date marks the launch of Letter to Brazilians in defense of the democratic rule of law, which draws attention to the escalation of the Bolsonaro government and has already received more than 800,000 signatures. Student, union and popular movements and civil society organizations are preparing a series of simultaneous acts in the capital of Rio Grande do Sul.

The União Gaúcha dos Estudantes Secundaristas (UGES) and the União Estadual dos Estudantes (UEE-RS) convene to take to the streets in defense of education, which has been one of the main targets of the Bolsonaro government’s attack. The act refers to Student Day, also celebrated this Thursday and which also marks the creation of the National Union of Students (UNE), an entity historically present in social struggles.

The students’ act starts at 8 am, in front of Colégio Estadual Júlio de Castilhos (Julinho). Afterwards, the protesters will march to the Campus Centro of the Federal University of Rio Grande do Sul (UFRGS), where at 10 am the Central Directory of Students (DCE) of UFRGS performs an act against cuts in education and any type of coup.

At 11 am, the Faculty of Law of UFRGS and legal entities read the Letter to Brazilians in defense of the Democratic State of Law, which takes place at the same time in acts across the country. The text prepared by the Law School of the University of São Paulo (USP) already has more than 800 thousand signatures. The Manifesto of the Unit Council of the Faculty of Law will also be read, in activity on the stairs of the building. 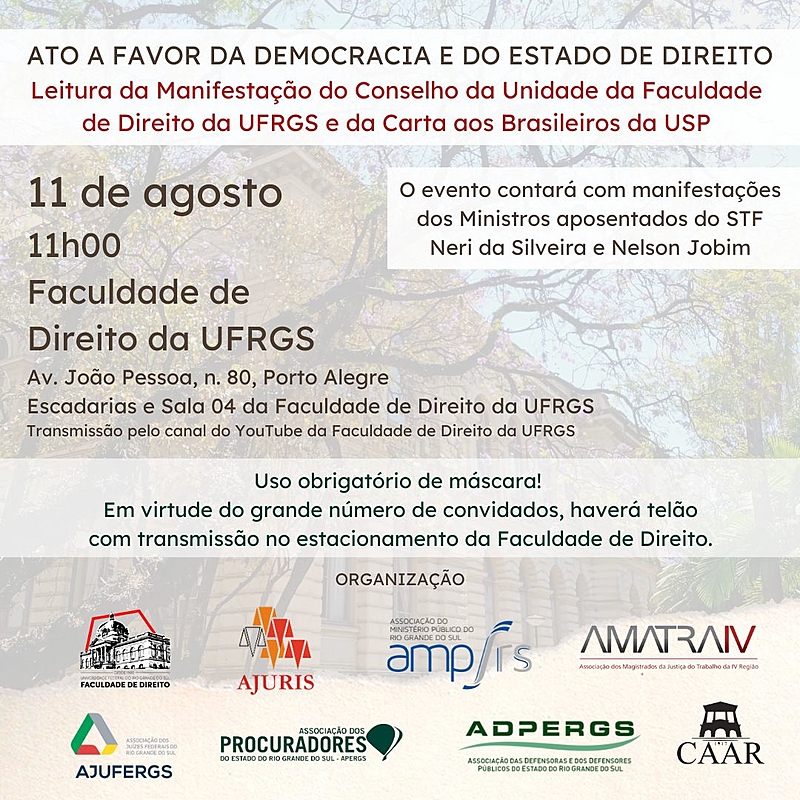 Afterwards, judges and judges go to a room at the Faculty to make their speeches and watch the USP act. The event will feature the participation of retired STF justices, Neri da Silveira and Nelson Jobim. To facilitate the monitoring, a screen will be installed in the parking lot of the Faculty, due to the large number of guests. There will be transmission by Youtube of the Faculty of Law of UFRGS. 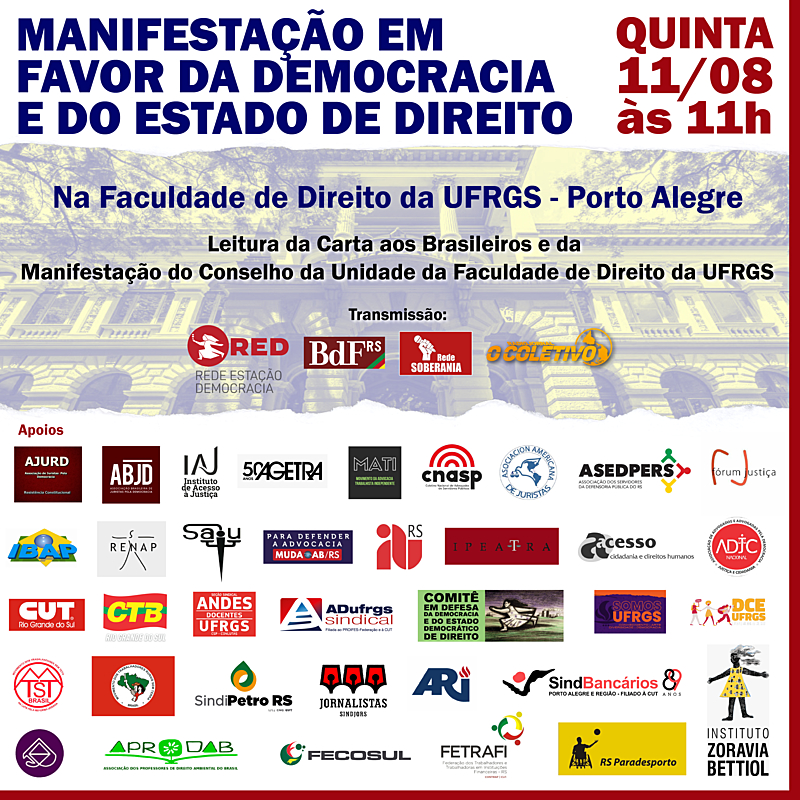 In addition to the students, the act at the Faculty of Law at UFRGS also includes a demonstration called by various entities, trade unions and social movements in support of the demonstration, in favor of democracy and the rule of law. Afterwards, a walk to the Piratini Palace is planned.

Brazil on the streets for democracy

Retired professor at UFRGS and member of the Committee in Defense of Democracy and the Democratic Rule of Law, Benedito Tadeu César highlights that the demonstrations on the 11th represent the engagement of important sectors of society.

“Large portions of civil society that had remained apathetic until now decided to join the reading of the Letter to Brazilians through ceremonies that will be held simultaneously throughout the country. Participation in unified acts, which will bring together entities from the legal, business, student , unions and movements and various entities prove that society does not legitimize the attacks and coup threats made by the current president of the Republic”, he says.

The president of CUT-RS, Amarildo Cenci, emphasizes that the National Day of Struggle will be in defense of education, democracy, rights and respect for the people’s decision in relation to the electoral process. “It is essential that we stand together with students and with the entire social movement that wants a more equal Brazil, a sovereign Brazil and a Brazil back to workers with quality education and democracy”, he assures.

A Letter to Brazilians in defense of the democratic rule of law, which passed the mark of 800 thousand signatures this Tuesday (9), was signed by broad sectors of society, such as jurists, sportsmen, businessmen, intellectuals and the general population. The letter does not mention the name of Jair Bolsonaro, but warns that the country is “going through a moment of immense danger to democratic normality, risk to the institutions of the Republic and insinuations of contempt for the results of the elections”. Nor does it cite the names of other candidates.

President Bolsonaro has already attacked the initiative. This Monday, at an event at the Brazilian Federation of Banks (Febraban), in São Paulo, he said that “whoever wants to be a democrat does not have to sign a letter”. To an audience of bank employees he said that “democracy has to feel what the person is doing”, but he did not explain what he meant by the phrase.

A network of independent media will broadcast the demonstration and the reading of the letter in Porto Alegre on Thursday morning. To follow, just access the networks of the Brasil de Fato RSyes Sovereignty Networkyes Democracy Station Network (RED) It’s from The Collective newspaper.

In preparation for the 11th, the program Contraponto Interview this Wednesday (8), at 9 am, from RadioCom Pelotas in partnership with Brasil de Fato RS, it will address the resistance against the coup through the manifesto that united Brazil. Participating in the program are Leonardo Kauer, a lawyer, specialist in Human Rights and a degree in Legal and Social Sciences, and Estilac Xavier, a degree in Legal and Social Sciences. 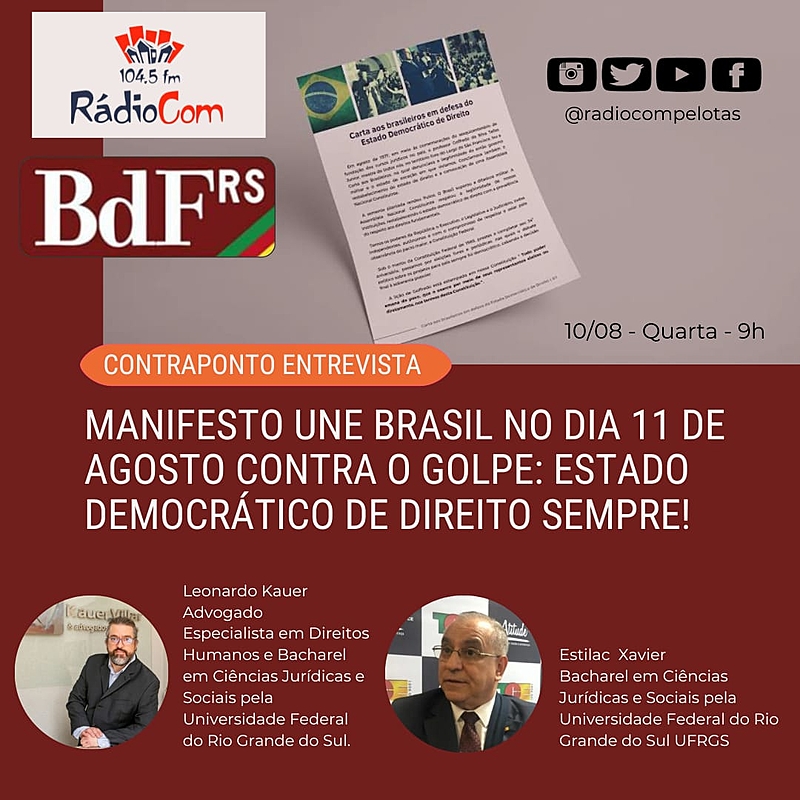