After six days, Cuba reports more than 120 injuries and one death from fires in Matanzas

Cuba faces the 6th day of fires in the province of Matanzas, 105 km east of Havana, after an explosion in oil storage tanks. The fire started on Friday (5), after lightning struck three reservoirs with a capacity to store around 25,000 m³ of fuel each. The Cuban government directed firefighters from all regions of the country to the scene and is counting on help from Mexico and Venezuela to stop the flames.

So far, one person has died, and 125 have been injured. Of these, 19 remain hospitalized, according to the Ministry of Public Health. About 1,300 people were evacuated from the region and health authorities in Matanzas are monitoring cases of respiratory emergencies that may arise due to the large amount of smoke in the accident area.

“Once the works to cool the tanks are completed and the flames are extinguished, actions will begin in the area of ​​the accident,” said Health Minister José Angel Portal Miranda.

Along with Legal Medicine specialists from the @MINSAPCubaanthropologists and members of the @minint_cubawe evaluated this Tuesday the strategy to be implemented once the flames subside at the Super Tanker Base, #Massacresand these teams can start doing their jobs. pic.twitter.com/tDKviUlek3

“Together with legal medicine specialists from the Ministry of Public Health, anthropologists and members of the Ministry of the Interior, this Tuesday we evaluated the strategy that will be implemented as soon as the flames subside at the Matanzas Tank Base and these teams can carry out their work”, published the Minister of Health on his Twitter

Due to the explosion, there are at least six thermoelectric plants out of service on the islandwith a deficit of 750 megawatts in energy generation, leaving a good part of the population without electricity for more than 12 hours a day.

A tanker from Mexico docked in Matanzas this Wednesday (10) to try to contain the fire in four large fuel depots, half the capacity of the Matanzas refinery’s Supertank Base. 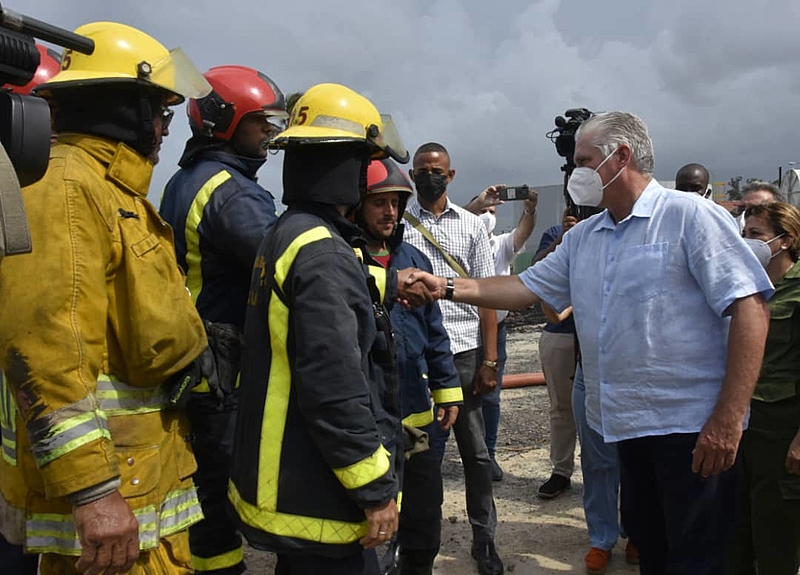 “My hugs and deep respect to those who are in the fight”, said Cuban President Miguel Díaz Canel as he accompanied the work to contain the fire in Matanzas / Presidency of Cuba

The Cuban government also has the help of a team of 127 Venezuelan and Mexican oil experts. In all, 20 humanitarian flights have arrived with international aid, including 45,000 liters of flame retardant foam, eight oxygen tanks, compressors and hoses.

Popular movements carry out international campaigns to raise funds for the island. THE Cuba Coopération France Association announced the sending of 10 thousand euros, while the Group of Brazilian Graduated Doctors in Cuba started a fundraiser to send medicines to the country.

“A change in the direction of the wind can fan the fire as long as there is fuel within reach of the flames, but nothing makes us sure that heroism and solidarity will extinguish it”, stated the Cuban president.

* With information from Prensa Latina, Granma and Cuba Debate

In the Sumy region, several settlements were left without gas - OVA