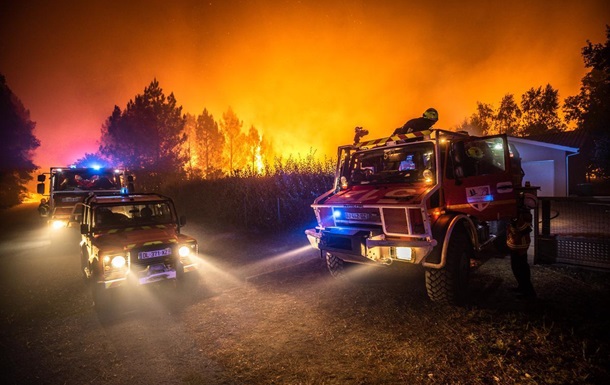 Thousands of people evacuated in southwestern France due to wildfire

In the department of Gironde, 3.5 thousand people had to leave their homes, including residents of the municipalities of Hostin and Saint-Magne. In the Landes – several hundred evacuees.

Several thousand people were evacuated in the southwest of France due to a large forest fire. This is reported Le Figaro.

Several fires broke out over the weekend, and France is experiencing a new heat wave that could be the biggest this summer.

The fire is raging in the departments of Landes and Gironde, where there was also a large forest fire last month. According to local authorities, 3.5 thousand people had to leave their homes in the Gironde department, including residents of the municipalities of Hostin and Saint-Magne. In the Landes – several hundred evacuees.

Meanwhile, 6,000 hectares of forest have already burned down, authorities say. In the town of Belin-Belley in the Gironde, 16 houses were destroyed. 300 firefighters were called in to extinguish the fire, two of them were injured.

In the Gironde, more than 20,000 hectares of forest were reduced to ashes by two large fires last month. In addition, about 3,000 people were evacuated on the night of Monday to Tuesday due to a forest fire in the municipality of Mostuezhul. Among them were a large number of camping guests.

Forest fires in France are partially caused by the fact that residents do not follow the rules, a commission of inquiry of the French Senate concluded last week. In risk areas, people need to remove bushes within a radius of 50 meters around their own home, but not everyone does this. This allows fires to spread faster.

Recall that in July in the city of Montpellier in southern France, rescuers extinguished a fire that burned about 900 hectares of territory.

After six days, Cuba reports more than 120 injuries and one death from fires in Matanzas

In the Sumy region, several settlements were left without gas - OVA