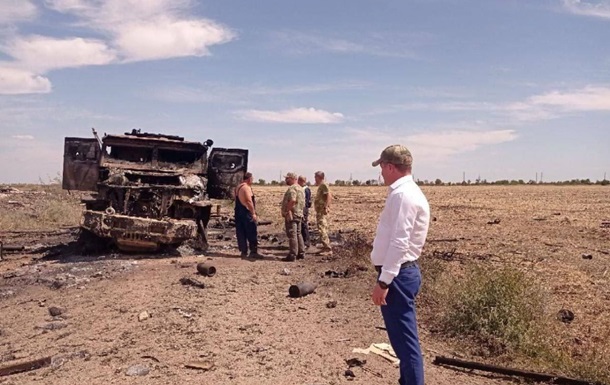 In the Kherson region, the equipment of the occupiers burned down

The Ukrainian command ironically hints that this is the work of Ukrainian defenders. And the invaders suffer serious losses.

In the temporarily occupied Novoalekseevka, Kherson region, a hangar and equipment of Russian invaders burned down. The Ukrainian command ironically hinted that this was the work of the Armed Forces of Ukraine. The relevant information was published in the official Telegram channel Stratcom APU.

“The occupiers continue their total disregard for security measures and smoking in undefined places. This time, in the occupied Novoalekseevka, Kherson region, someone also smoked unsuccessfully. As a result, the hangar and equipment burned down,” the Strategic Command of the Armed Forces of Ukraine reported.

The photo attached to the post shows the destroyed vehicles and the remnants of ammunition. Judging by the ironic tone of the message, the Armed Forces of Ukraine inflicted a blow on the enemy in Novoalekseevka. Or there was a sabotage organized by Ukrainian defenders.

In addition, it burns in Chongar, which is on the border with Crimea, according to the Telegram channel. Repichka_news.

“The soldiers have nothing to do, so they smoke wherever they don’t get,” they wrote ironically in the message.

So far, there is no official information about this incident.

Recall that earlier the Armed Forces of Ukraine “worked out fire control” and hit the Antonovskiy and Kakhovskiy bridges.

The Insider spoke about the archive of complaints to the prosecutor's office, showing the real state of affairs in the Russian army, looting and atrocities of the military