A total ban on the import of Russian coal has come into force in the UK and the European Union.

A total ban on the import of Russian coal came into force in the European Union on August 10. The EU agreed to this measure in early April, as part of a fifth round of sanctions in response to Russia’s full-scale military invasion of Ukraine. Today, Great Britain refused Russian coal. The US banned the import of gas, oil and coal from Russia in early March. Perild.com tells the details.

Just four years ago, about half of Russian coal exports went westward, towards Europe. At the beginning of this year, over 50 percent of the hard coal it needed, Germany, the largest economy in the European Union, imported from Russia.

Prior to the full-scale invasion of Ukraine, Russia supplied 70 percent of the EU’s energy coal needs, according to BCS Global Markets. But today the situation has changed dramatically.

On August 10, after a four-month transition period, the EU embargo on Russian coal imports, introduced in early April as part of the fifth round of sanctions due to Russian aggression against Ukraine, came into force. Prior to this, the parties were allowed to fulfill contracts concluded before April 9.

The European Commission estimates that the embargo will affect 25 percent of all Russian coal exports. According to Forbes, the Russian Federation loses more than 130 billion in revenue per year. A coal import ban would have the least impact of any energy source. 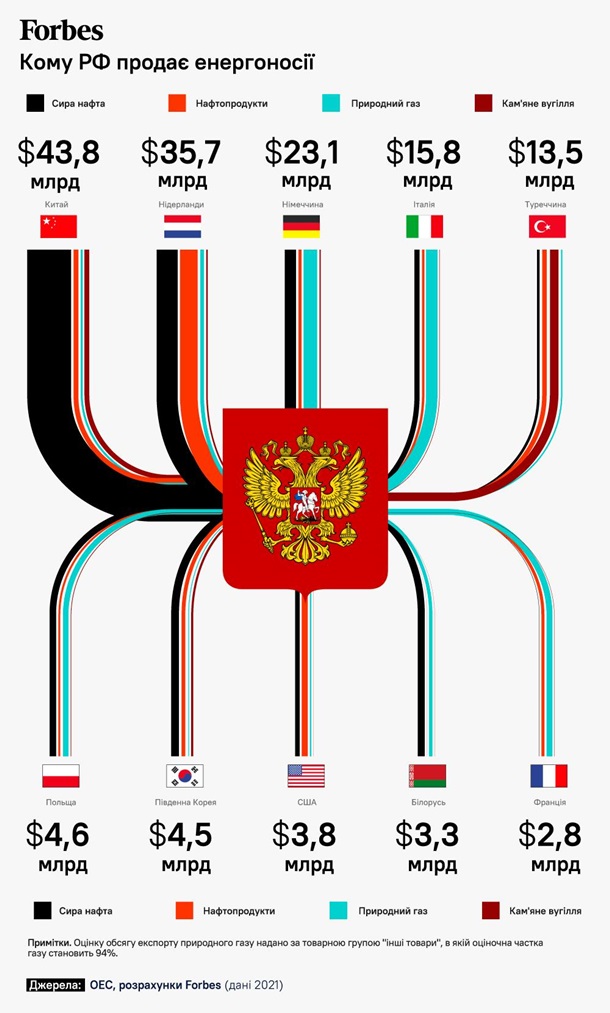 To whom does the Russian Federation sell energy

Even if coal sanctions are lifted from Russia, Russian coal miners have finally lost the European sales market: over the course of this decade, most European countries intend to completely abandon the use of fossil fuels, the most harmful for the global climate, in the electric power industry.

“What we should not happen under any circumstances is that we will slide into some kind of global renaissance of fossil fuels and especially coal,” said German Chancellor Olaf Scholz.

He said the current reopening of already decommissioned coal-fired power plants is “a strictly time-limited emergency measure that should not adversely affect the achievement of our climate goals.”

The loss of this market will not force Russian ruler Vladimir Putin to withdraw troops from Ukraine, the EU says, but remind that the coal embargo is just one of many Western sanctions designed to maximize the cost of war against Ukrainians for Russia.

However, for several important sectors of the Russian economy and for some regions of the Russian Federation, the refusal of Europeans from Russian coal will result in significant losses, writes DW.

The miners of Kuzbass and other coal regions of the Russian Federation, as well as such a large Russian employer as the Russian Railways company, for which coal transportation is one of the key sources of income, will suffer the most.

In Russia they say that they have already found new markets for coal. However, it will not be possible to fully compensate for the losses: transport capacities in the east direction are limited, and it will take years and huge investments to increase the capacity of the railway in the Baikal region and in the Far East.

Russian ports focused on transshipment of coal will also suffer, especially in Ust-Luga, as well as the Murmansk transport hub, which had practically no other business.

In addition, according to the NKR rating agency, Russian coal is currently sold on the world market with a discount of up to 50 percent.

Europe warms up the global market

EU coal imports from Colombia quadrupled in June, to 1.2 million tons, according to Braemar. Deliveries of Australian coal reached 1.1 million tons, the highest ever. Exports from the US increased by 27.9 percent to 618,000 tons. South Africa sent 854 thousand tons to Europe, a year earlier it was not on this market at all. Deliveries from Kazakhstan reached 300-400 thousand tons per month, although a year earlier they did not exceed 70 thousand.

Europe’s rejection of Russian fuel will provide significant support to the coal market, according to Fitch Solution analysts, whose opinion is cited by Bloomberg.

In particular, the ban on the purchase of Russian fuel will increase the demand for coal from other countries such as Indonesia and even Australia. And plans to replace Russian gas with LNG will cause many countries to run out of gas and increase their use of coal.

Fitch has significantly raised its forecasts for thermal coal prices from Asia for this year and beyond. According to new agency estimates, coal loaded in Newcastle, Australia, will cost $320 per ton this year, and an average of $246 per ton in 2022-2026. Previous forecasts quoted prices of $230 and $159 per tonne, respectively.

Record prices for coal in Asia were recorded in June against the backdrop of Russia’s war against Ukraine, as well as due to the lack of alternative energy sources and increased demand for electricity due to the heat in the region. Then the regional reference price per ton of coal in the Australian port of Newcastle reached $402.5 and for the first time exceeded $400 per ton.

The situation in the futures markets, according to Bloomberg, also indicates that high coal prices will continue. So, futures contracts for coal for delivery in December 2026 are at $233.15 per ton. At the beginning of this year, their price was $111.15 per ton, and at the beginning of 2021 – $80.8 per ton.

Recall that by the end of the year, European countries plan to partially abandon the supply of Russian oil. An exception is provided for the import of crude oil through the pipeline. At the same time, the West is working on introducing a price ceiling for Russian oil.