In national articulation, women held an act this Saturday morning (13) in the central area of ​​Recife against the Bolsonaro government (PL), in support of the candidacy of Luis Inácio Lula da Silva (PT) and in defense of feminist agendas. Militants from popular movements and women’s secretariats from political parties began to gather at 9 am in Parque Treze de Maio, in the Santo Amaro neighborhood.

The mobilization “Juntas pelo Brasil”, which takes place in at least 25 states, is convened by the Popular Committee for the National Struggle “Women with Lula”.

Read more: Women take to the streets this Saturday for democracy and to put equality on the agenda in elections

In the capital of Pernambuco, members of the parties that make up the Popular Front of Pernambuco and trade union movements and centrals made a call against racism, LGBTQIA+phobia, violence, unemployment and social inequalities. Entities such as the Central Única dos Trabalhadores (CUT), the World March of Women (MMM), the Movimento Brasil Popular (MBP), the Movimento Negro Unificado (MNU), the Marcha das Margaridas, the Movimento dos Trabalhadores Rurais Sem Terra (MST), the Popular Youth Uprising and the Movement for the Struggle for Land, Roof and Work (MLTT).

Popular Struggle Committees of popular movements in Pernambuco were also present. “We met this morning to join the chorus for democracy and our rights. We understand that, for us to rebuild Brazil, it has to be guided by a popular feminist and anti-racist project. Electing Lula with a popular project with this focus is our central task”, affirmed Julia Aguilera, representative of the Movement’s Committees. 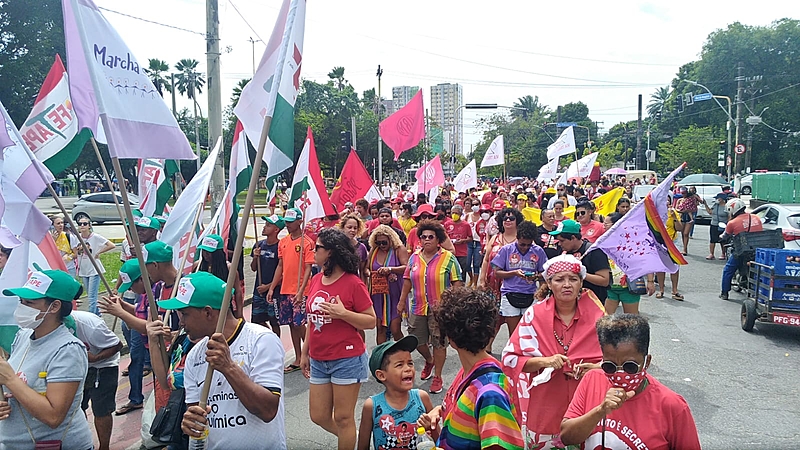 The act went out through the streets of the capital of Pernambuco around 10 am, passing through Avenida Conde da Boa Vista / Maria Lígia Barros

Activist Elisa Maria, from the World March of Women and the Popular Brazil Movement, said that this reconstruction goes through the streets and also through the polls. “We are women with Lula and with the objective of electing benches and a team that, together with popular movements and organized civil society, will put our country back on the tracks of employment, food sovereignty and a life without violence and without racism. “, he highlighted.

The PT State Secretary for Women, Paula Menezes, highlighted the unitary nature of the mobilization against Bolsonarism. “Today, all women in Brazil are taking action in this construction, and here in Pernambuco it is no different. We are all united in defense of the country’s democracy, that the electoral process is real and protected for Brazilians. to try to make this transformation of Brazil by women. It’s a day when we want to express our desire for change”. 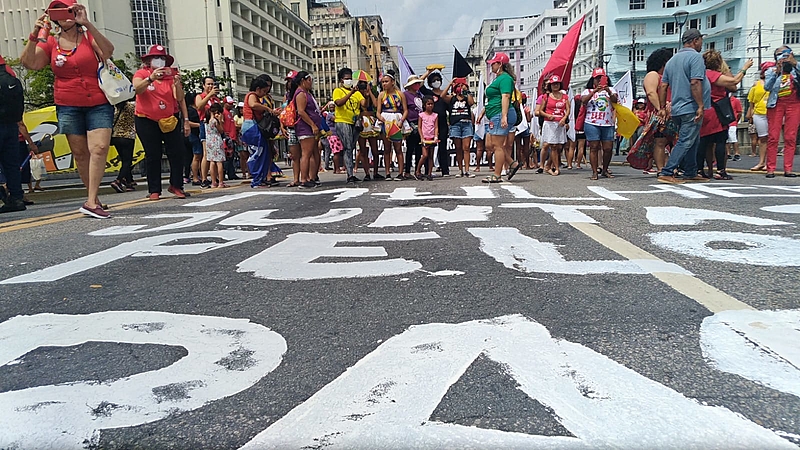 Protesters intervened on the Duarte Coelho bridge, writing on the asphalt the words “Women together for Brazil”./ Maria Lígia Barros

The political importance of the female population was recalled by the state secretary for Women of the PSB, Niedja Guimarães. “We are the majority and we make a difference in this election and in all situations. And we are victims of violence all the time. It is an immense expectation of all Brazilians [pelo mandato de Lula]and we expect him as president to bring everything he has built to the country and more”.

“Brazil is going through a very difficult situation”, commented Recife councilor and pre-candidate for state deputy Cida Pedrosa, from PCdoB – one of the parties that built the act. “We’ve never seen our people so hungry, going through so much unemployment and in such an unfavorable economic situation. We need to put a stop to it,” she said.

The Ministry of Internal Affairs predicted an increase in new crimes