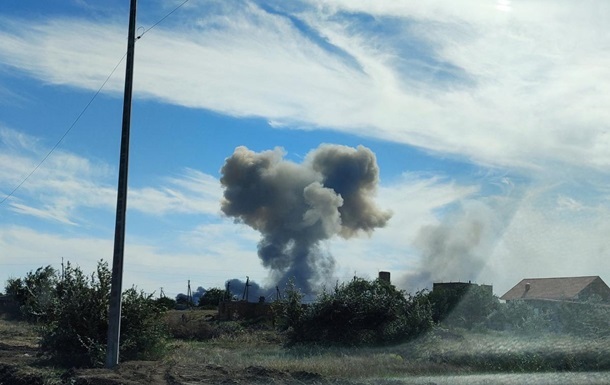 The ammunition depot, judging by the published video, was located in the open air next to the railway track and was clearly visible to all passers-by.

The Russian Defense Ministry said the explosions at an ammunition depot near occupied Dzhankoy were the result of sabotage. This was reported on Tuesday, August 16 by the Russian propaganda media.

“On the morning of August 16, as a result of sabotage, a military warehouse near the village of Dzhankoy was damaged,” the report says.

According to the Russian Defense Ministry, the damage was caused to civilian facilities, “among which are power lines, a power plant, a railway track, as well as a number of residential buildings.”

At the same time, it is noted that there were no serious injuries.

Meanwhile, a video of military warehouses near Dzhankoy before the explosion appeared on the network. Judging by the record, the warehouse was organized in the open air, boxes with weapons were stored right next to the railway track. Nearby was the MLRS. The warehouse was clearly visible to all passengers of passing trains.

Recall, on August 16, explosions thundered in the Crimea. In particular, two incidents occurred at once: a fire at a transformer substation and a detonation at an ammunition depot in the village of Mayskoye near Dzhankoy.

The Ministry of Defense of the Russian Federation stated that the detonation of ammunition occurred as a result of a fire. After that, train traffic was limited near Dzhankoy.

Mikhail Podolyak, adviser to the head of the President’s Office, said that the explosions in the occupied Crimea are “demilitarization in action.”