Two billboards placed on the sides of buildings in Porto Alegre (RS), one in the central region and another in the North, are provoking a battle in the courts for their removal. As reported by Brasil de Fato RSthe facilities began to draw attention from the night of the 11th.

Paid advertising contains ideological right-wing propaganda, associating a false opposition of ideas between a Brazilian flag and the symbol of communism, the hammer and sickle. In addition to common sense jargon seen in fake news, the propaganda calls for the pro-Bolsonaro government demonstrations of September 7.

Most read: In RS, first debate between government candidates exposes clash and differences 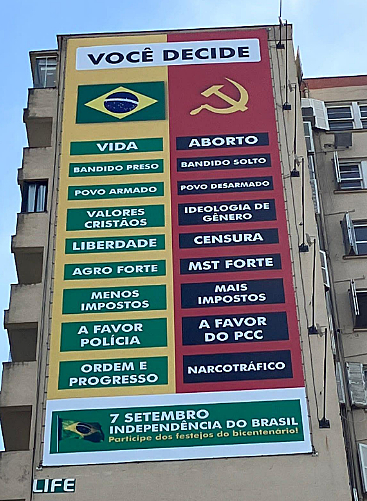 Advertising presents false ideas; company responsible for the installation “did not see a political message” on the billboard / Reproduction

Since Friday (12), two representations have been initiated in court, asking for the removal of the facilities. The first of them, intended for the Public Ministry of RS (MP/RS), at the request of the mandate of councilor Leonel Radde (PT), took effect and is awaiting a decision from the electoral judge.

In contact with the MP/RS press office, it was replied that, from the initial representation, an “inquiry warrant was issued for the company responsible for the banners to provide the contracts, the names of the people who hired them and the invoices of the service payments”. The MP’s advice also informed that, after the warrant was fulfilled on the morning of this Monday (15), the records were sent to the Electoral Court, with the request for the removal of the materials. The court was expected to render a decision this afternoon.

The BdF RS report contacted Leonardo Zigon, director of the Life company, responsible for installing the advertisements. Regarding the representations that are underway in Justice, Leonardo preferred not to comment.

He stressed that Life is a “communication vehicle”, and that the content in question is “an advertisement, not editorial content”. The director was also asked about the information that the company had not seen political content in the campaign, to which he replied: “I say that I do not see partisan content. It existed in the first material they sent us, and we refused.”

Zigon also stressed that the company’s official position, at the moment, is that which is published on Life’s website, as well as on its social networks. 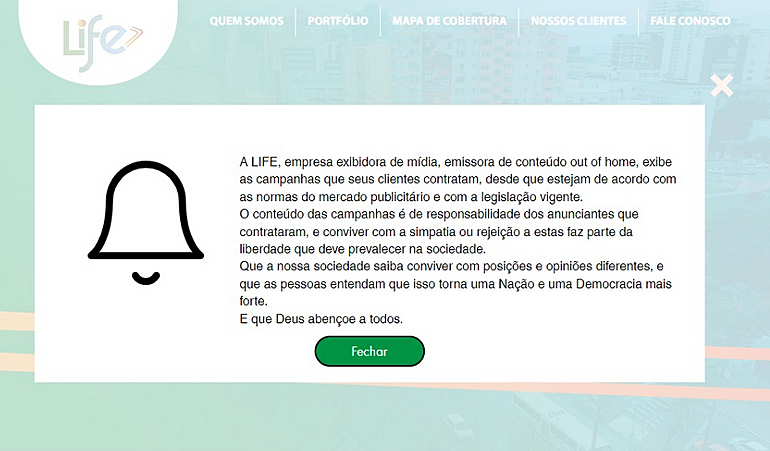 Message displayed on the home screen of the Life company / Playback

As explained by lawyer Maritania Dallagnol, representative of the Brasil da Esperança Federation in RS (PT, PCdoB and PV), a complaint of the same tone was formalized at the Regional Electoral Court, with the claim of anticipated electoral propaganda.

It also clarifies that this complaint occurred in parallel with the representation brought by the mandate of councilor Radde. However, the Federation’s complaint ended up annexed to the lawsuit filed by the MP/RS.

In the content of the representation, a history is made of how the communication of the current president Jair Bolsonaro (PL) is associated with the image of the national flag and also with the ideas present in the billboard posted in Porto Alegre. In this way, he concludes that the advertising piece “has a clear and blatant character of anticipated electoral propaganda”.

In addition, the representation also recalls that the advertising piece uses the symbol of the hammer and sickle, associated with communism, also used by PCdoB, a member party of the Federation, contributing to a targeting of “criminal charges disclosed in the artifact in question”.

The Federation’s request also highlights that the advertising piece occupies the entire wall of the building, having “a total area of ​​117m²”; also states that the site has an intense flow of vehicles and pedestrians, being viewed by more than 2 million people monthly.