The reality that scattered news or local experience already demonstrated is now, once again, proven in numbers. Attacks on native peoples in Brazil are on the rise. During the third year of Jair Bolsonaro’s (PL) government alone, 176 indigenous people were murdered in the country.

Launched this Wednesday (17), the report Violence Against Indigenous Peoples of Brazil, an annual publication of the Missionary Indigenous Council (Cimi), records 355 cases of violence against indigenous people throughout 2021. It is the highest rate since 2013, when the counting method has been changed.

In 2020, there were 304 cases – which, in addition to deaths, include threats, injuries, racism, sexual violence and attempted murder. From one year to the next, therefore, there was an increase of 51 episodes of this type. “It’s a level of violence that we hadn’t seen this way before”, summarizes Lucia Helena Rangel, Cimi’s anthropological advisor.

Following the same pattern since Bolsonaro took office, the states that recorded the highest number of indigenous murders were Amazonas (38), Mato Grosso do Sul (35) and Roraima (32).

“The general context of attacks on indigenous territories, leaders and communities is related to a series of measures, by the Executive power, that favored the exploitation and private appropriation of indigenous lands”, evaluates the Cimi report.

:: Indigenous Ministry is not the solution, but “de-bolsonarize” Funai, says Sydney Possuelo ::

If the stoppage of the demarcation of indigenous lands (TI) was an unchanged guideline throughout the Bolsonaro government, over the years the consequences of this official indigenous policy represented, according to the report, “the worsening of a scenario that was already violent and appalling”.

For the sixth year in a row, Cimi recorded an increase in “possessory invasions, illegal exploitation of resources and damage to property” in TIs. In 2020, 263 invasions were recorded in the territories of native peoples, while in 2021 there were 305, an increase of 16%.

“We see huge machines, armed groups, shootings and murders behind the mining of gold and some minerals such as cassiterite, practiced in a violent way. These invasions have systematically increased, especially in the Amazon region. But also in other regions where there are ore”, reports Rangel.

The situation is not just the result of state omission, but of the intentionality of the Executive and Legislative powers. Among the State’s actions that actively harm indigenous peoples, the report highlights Normative Instruction 09, published by Funai in 2020, which authorized the certification of private properties that are within non-approved indigenous lands.

In 2021, the Joint Normative Instruction of Funai and Ibama went further: it allowed the economic exploitation of indigenous lands by organizations of “mixed composition” between indigenous and non-indigenous people.

In addition, the set of Bills (PL) dubbed by the indigenous movement as the End of the World Package is in progress. It includes, for example, PL 490/2007, which makes new demarcations unfeasible and PL 191/2020, which provides for the exploration of mining companies in TIs. 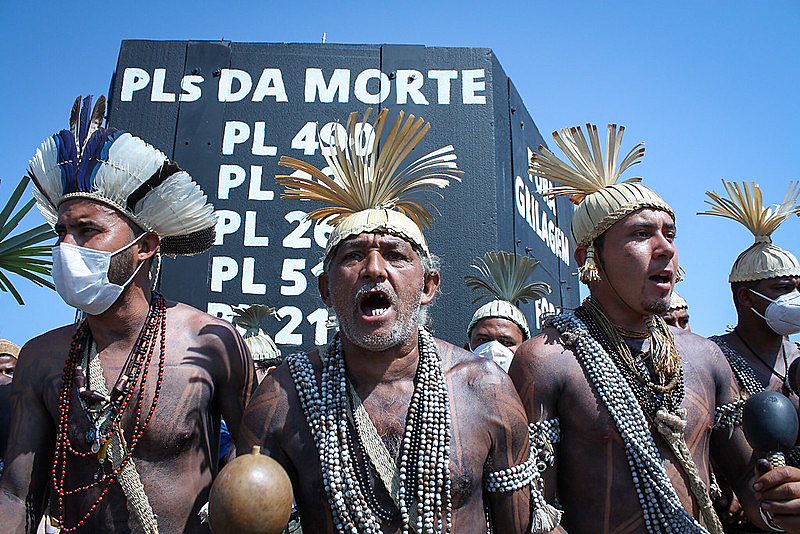 In one year, invasions and illegal exploitation of indigenous lands increased by 16% in Brazil / Marina Oliveira / CIMI

“This set of actions gave the invaders confidence to advance their illegal actions in indigenous lands. Mining areas developed extensive infrastructure, invaders expanded the deforestation of forest areas to open pastures and plant monocultures, and hunters, fishermen and loggers intensified their incursions into the territories”, describes the document.

The struggle against the approval of this package and also of the time frame by the Federal Supreme Court (STF) is at the heart of indigenous claims in recent years, having driven massive national mobilizations, such as those that led, in 2021 and 2022, to about seven thousand indigenous people. to Brasilia.

According to a survey by Cimi, 62% of the 1,393 indigenous lands in the country are pending their regularization. Among these, which total 871, there are 598 that, despite being claimed by indigenous peoples, do not show any State action to start the demarcation process.

Among the conflicts over land, the report also highlights the recurrence of indigenous lands where Rural Environmental Registry (CAR) overlaps. That is, certifications of private properties on top of traditional territories. “In some cases, as in the Uru-Eu-Wau-Wau TIs, in Rondônia, and Barra Velha, in Bahia”, the document illustrates, “there was an attempt to sell ‘lots’ of land through social networks”.

The mapping of the forms of violence to which indigenous peoples are subjected in Brazil also highlights the burning of houses of prayer – primordial spaces for spirituality, resistance and maintenance of the traditions of various indigenous communities.

In 2021, four cases were registered against the Guarani and Kaiowá peoples in Mato Grosso do Sul and one against the Guarani Mbya people in Rio Grande do Sul. Despite the destruction, through voluntary collections and community efforts, the houses of prayer have been rebuilt.

:: Under pressure from agro, extinction of extractive reserve becomes electoral flag in Amazon::

The situation of peoples in voluntary isolation is also getting worse. This isolation is guaranteed by federal ordinances but, in some cases, they have not even been renewed. The Jacareúba-Katawixi TI, in Amazonas, is one of the areas that is unprotected. The ordinance that guarantees isolation expired in December 2021. In other cases, the ordinances were renewed, but only for a period of six months.

“The invasions affected at least 28 ILs where there are isolated indigenous peoples, putting the very existence of these groups at risk”, warns Cimi.

The report, available at Council website, also features articles that, among other topics, address the incarceration of indigenous people in the country; the budget execution of Bolsonaro’s indigenous policy; and mechanisms for reparation and non-repetition of violations against this population.