Loss of housing, ways of life, productive activities, community relations and kinship. Loss of access to natural resources and food security, among several other violations, are the consequences of the compulsory displacement caused by the criminal disaster committed by the mining companies Samarco, Vale and BHP since November 2015.

This is the conclusion of the analysis of data from the registration process of people affected in Mariana, conducted by Cáritas MG. The analysis shows that at least 1246 families were forced to migrate, which corresponds to 85% of the total. 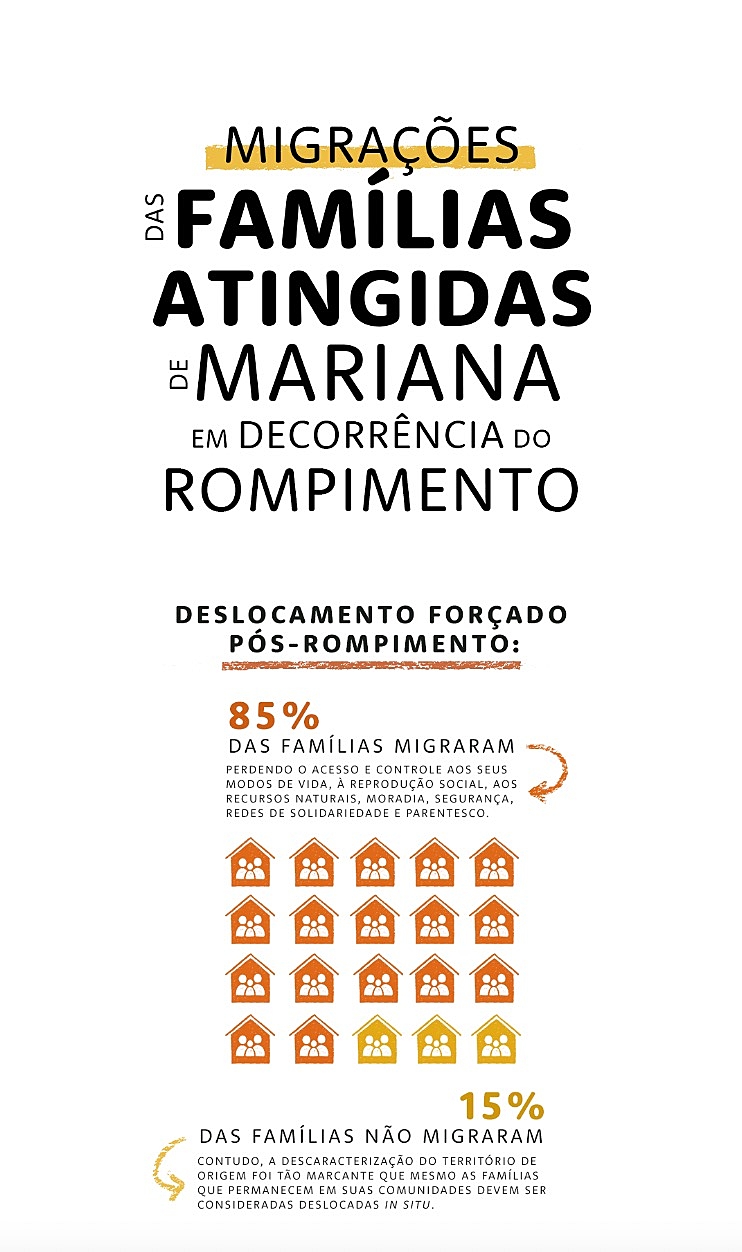 This was the case with the family of Marino D’Angelo, who was reached from Paracatu de Cima. A rural producer, Marino and his family have a way of life linked to dealing with animals in the fields. Today, he lives in a rented property in the district of Águas Claras, where he tries, with great difficulty, to continue producing.

The process of impoverishment of the family after the dam collapse is a factor of intense suffering. In addition, Marino talks about what he considers absurd expenditures by the Renova/Samarco Foundation in actions that do not promote the effective repair of damages.

“I live in a temporary house for which the rent is almost R$ 7 thousand, the Renova Foundation has spent a lot of money on this property and this masks the reality”.

Maryellen Milena de Lima, from the Study Group on Environmental Themes (GESTA/UFMG), analyzes that “the lack of autonomy placed by housing for residing in rented houses is another factor of uneasiness, which ends up intensifying the anxiety of having your home, your working life and the rescue of what the mud has undermined”.

Marino D’Ângelo talks about the resources invested in improvements to the temporary housing, while structural issues are ignored and his family continues without compensation and without food aid in adequate quantity and quality for the animals. “They make improvements to rented properties, all these expenses made around those affected do not bring any effectiveness to our lives. We are left without even the slightest bit of food for the animals, without assistance or support for our resumption of life. The house here has a lot of leaks, these basic issues are not resolved, but money is being ripped off in the terreiro and on the person’s property [locatária] that doesn’t even get hit.”

1246 families were forced to migrate

Maryellen Lima also comments on the poor quality of housing available in Mariana. “There are several houses with infiltration problems, without adequate ventilation or even security conditions, with houses rented in places with geological risk or flooding”, points out the researcher. According to the report by the company Ramboll (2021), of the 184 temporary homes surveyed in Mariana, 46% present inadequate conditions, including situations of geotechnical risk.

Most (75%) of the affected families forced to leave their communities of origin sought refuge in the Mariana headquarters. In all, 947 families had to face the challenges of life in the urban area of ​​the municipality, many of them suffering from prejudice and the feeling of inadequacy to life in the city. 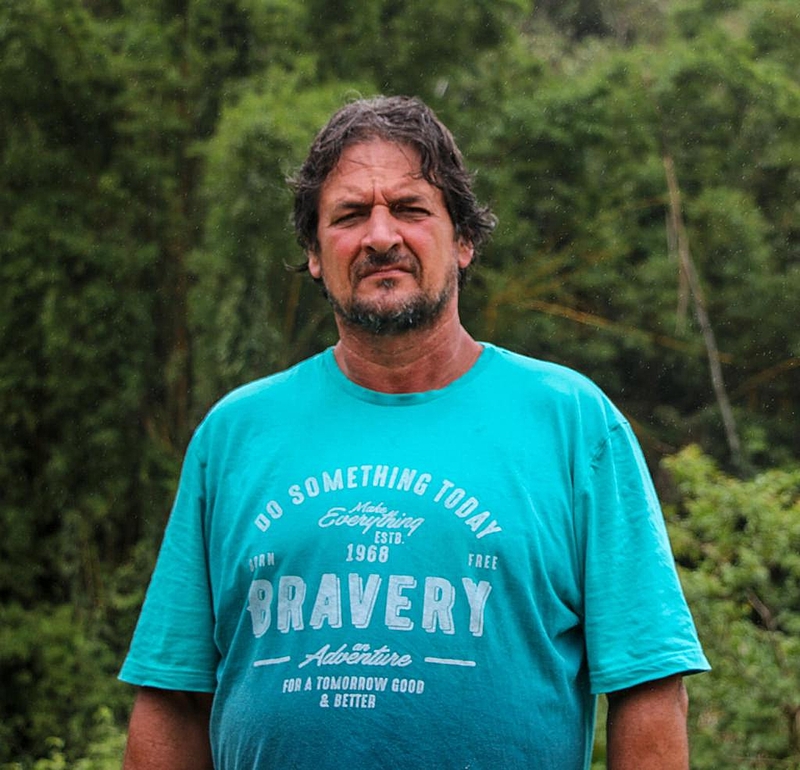 “We are left without even the least food for the animals, without assistance or support for our resumption of life”, says Marino D’Angelo, affected by Paracatu de Cima. / Joice Valverde/Jornal A Sirene.

There are cases of entire displaced communities, such as Bento Rodrigues and Paracatu de Baixo, but also families from 11 other rural communities in the municipality (Águas Claras, Bicas, Borba, Camargos, Campinas, Monsenhor Horta, Mata do Chaves, Paracatu de Cima, Pedras, Ponte do Gama and Santa Rita Durão) who had to leave life in the countryside behind.

Mirella Lino Sant’Ana’s family, from Ponte do Gama, is one of those hundreds. The young student, who at the time of the dam collapse was only 17 years old, had her life drastically changed with the move to the city. “Some rural families will not return to their original land, they will not live again in the place affected by the mud, because, in most places, these affected properties still have mud on the land”, explains Mirella.

The experience of compulsory displacement configured a ‘provisional life’ for the victims in a space completely different from their communities of origin, notes the researcher from GESTA/UFMG. Maryellen explains that “the distance between relatives and neighbors is a significant cause of suffering, as the dissolution of close nuclei also represented the rupture of networks of reciprocity and solidarity, causing the isolation of family groups”.

Meetings between neighbors were made difficult by the dispersion and distance between the houses rented to shelter the affected and affected. Since then, there have been frequent observations that people go days or even months without seeing each other”. The disarticulation of support sociability networks tends to be aggravated in cases of emigration to other municipalities, the current situation of 13% of affected families in Mariana registered by Cáritas MG. 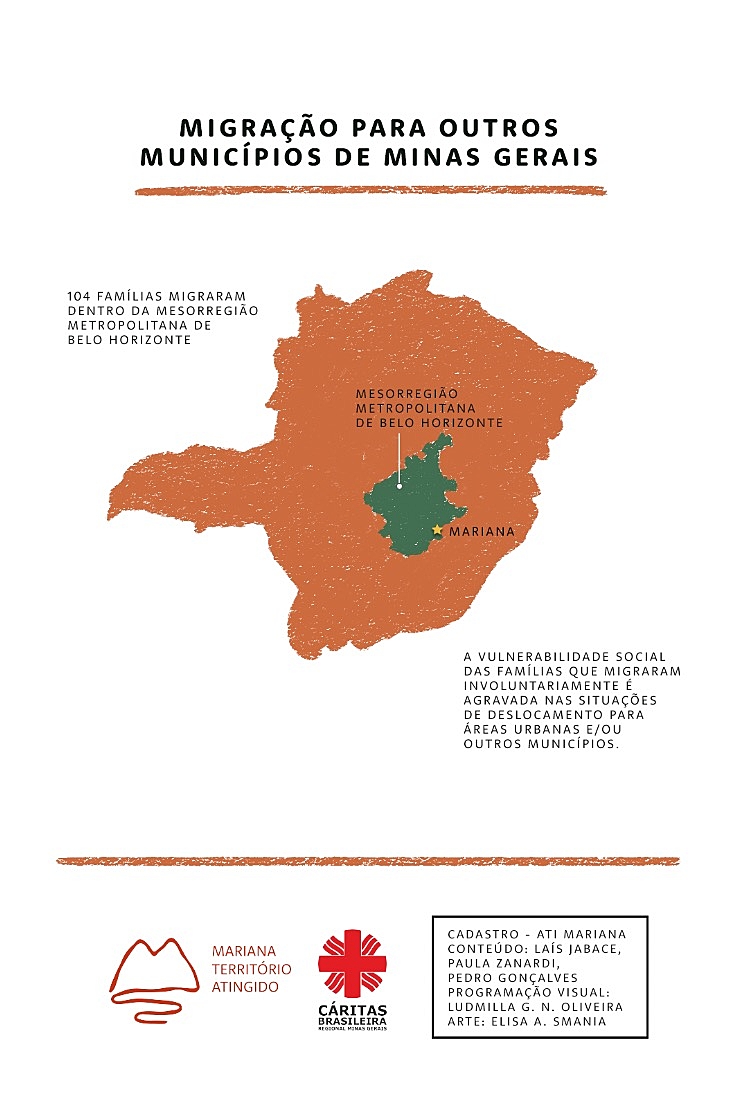 Only 395 families remained in the rural area, which represents 12% of the families. Already 15% of the family nuclei registered by Cáritas MG, continue in their own communities of origin.

At 66 years old, Zé de Félix never left his country. “That’s where my corner is, where I can live my peaceful life, thank God.” The person affected, who works as a school bus driver in his community, shows empathy and reports what he perceives in the relationship with the affected families who live in the urban area today. “I’m taking a base for myself, I wouldn’t like to live in the city. If they were paying for a mansion for me to live in the city, I don’t want to. So, people affected throughout the region have the suffering of living in the city. Companies are paying them rent, but they are sorry to live in the city because they don’t like it. This mud that was all over us was a horrible disaster.”

13 rural communities had families forced to leave the countryside

The toxic waste still deposited in the affected areas, community isolation, the impossibility of carrying on with productive activities and the consequent impoverishment are some of the suffering factors for many families who continue to live in the territory of origin. This makes the families who remain in Paracatu de Baixo and in the affected communities in the rural area of ​​Mariana experience what researchers Raquel Teixeira, Andréa Zhouri and Luana Dias Motta call “in situ displacement”. 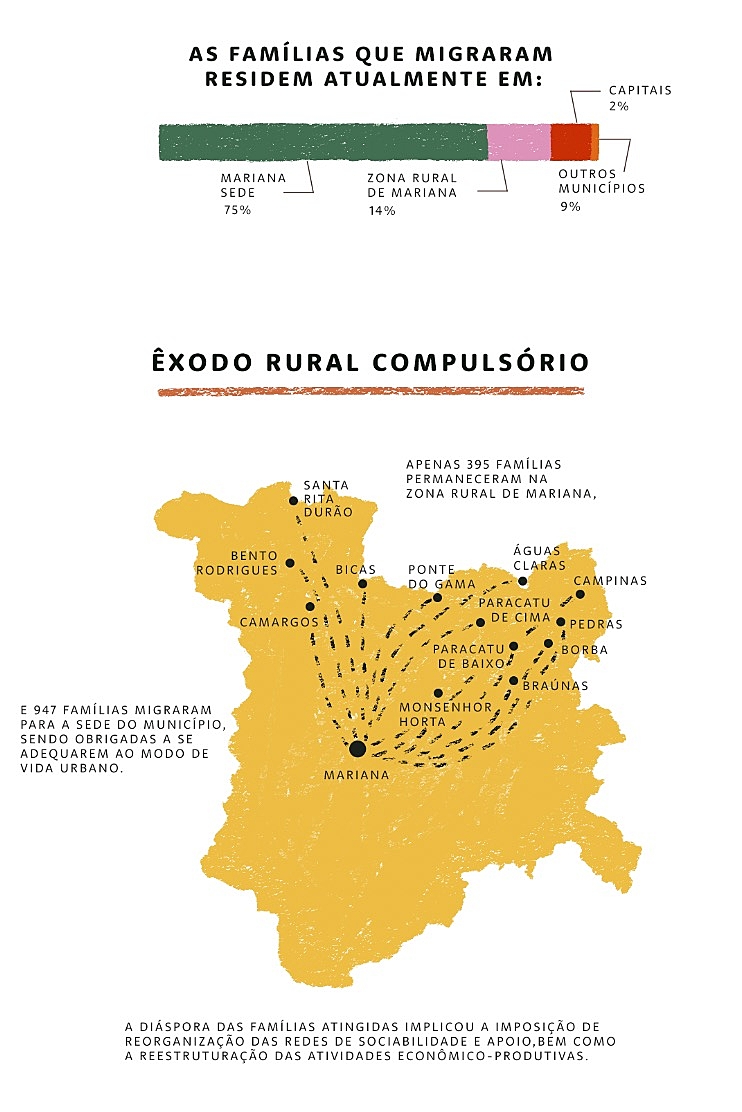 In the text published in the Brazilian Journal of Social Sciences, in 2021, they define: “’In situ displacement’ refers to processes in which people remain in place, but have their conditions of existence significantly altered, modifying their social position, in particular their conditions of vulnerability and risk. To this extent, compulsory displacement does not concern physical movement itself, but the relationships from which people lose access and control of their conditions of existence and social reproduction, including natural resources, housing, security and networks of solidarity, trust and kinship”.

In Mariana, these are people forced to live and live with drastic changes in the territory, changes they did not choose, over which they have no control and which place them in extreme vulnerability. These people do not leave their places of origin, but see their resources and ways of life being undermined by the consequences of the disaster-crime.

Almost seven years have passed and the damage caused by the criminal disaster at the mining companies Samarco, Vale and BHP remains without effective repair.

Several agreements entered into, such as the Term of Transaction and Conduct Adjustment (TTAC), known as the “agreement”, signed in March 2016, which established 42 repair programs and created the Renova Foundation; and the TAC Gov, approved in August 2018, to define a governance system that aimed to include the people affected, were never effectively applied.

Despite successive complaints from the people affected and the ATI of Cáritas MG, there was never any punishment for non-compliance.

In this scenario, the renegotiation process led by the National Council of Justice, the CNJ, arises, whose letter of premises was signed in July 2021 and the negotiation rounds have taken place since September of the same year. However, it was only in March 2022 that those affected in Mariana were informed that they would be considered within the scope of this process, which, as in the two agreements mentioned above, continues without the effective participation of the victims of the rupture.

At the negotiating table, in which fundamental points for the lives of the thousands of families affected are decided, the defendant companies, the Public Power, representatives of the Union and the States of Minas Gerais and Espírito Santo, in addition to the respective Public Prosecutors and Defenders public. There are many uncertainties, among them what will be defined about the destination of the lands of origin, the follow-up of the resettlements and how the affected animals are left.

13% of affected families moved to another municipality

Mirella Lino Sant’Ana tells about the achievement of resettlements for families who suffered compulsory displacement. “We conquered family resettlement, which gave us the right to have a new resettlement, a new house, in a different place from the one where we were affected. This is the case with my family, we are not going back to the property that was hit there in Ponte do Gama”.

The young woman highlights the achievement of non-exchange. “We also conquered the right that, in the lands of origin affected here in Mariana, Bento, Paracatu or in the countryside, the affected people would not lose their right and access to the detriment of compensation and resettlement. The company would not buy, so to speak, the land of those affected with compensation and with the new resettlement”.

However, with the renegotiation process underway, without the participation of the affected people, Mirella shows fear of setback. “It was one of the most difficult rights to conquer. But it seems that it is now in danger with the renegotiation movement, especially for the people of Bento and Paracatu. There, the entire community was displaced.”