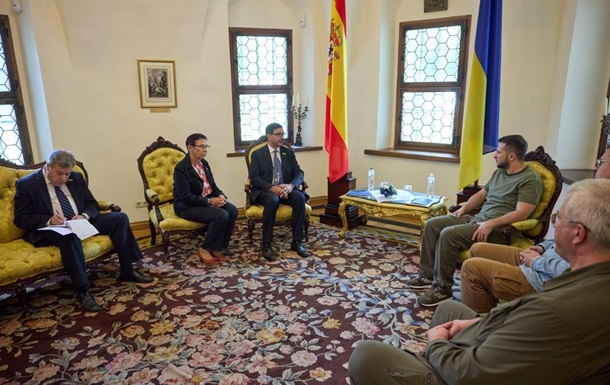 Zelensky communicates with the Ambassador of Spain to Ukraine

The ceremony of presenting credentials was held on the territory of the National Reserve Sophia Kyiv.

President Volodymyr Zelenskyy received credentials from Ambassador of Romania Alexander Victor Mikula, Ambassador of Belgium Peter Van de Velde, Ambassador of Spain Ricardo López-Aranda Hagu and Ambassador of Kyrgyzstan Idris Kadyrkulov, who have started a diplomatic mission in Ukraine. About it informs press service of the head of state on Wednesday, August 17.

During a conversation with the Ambassador of Kyrgyzstan, the Ukrainian President expressed hope for a decisive position of this country in support of the sovereignty and territorial integrity of Ukraine. Zelensky noted the importance of resuming full-format mutually beneficial cooperation and intensifying political dialogue at the highest level.

Congratulating the Ambassador of Romania, Zelensky thanked the President, government and citizens of this country for the broad support of Ukraine since the beginning of the full-scale aggression of the Russian Federation.

“Romania has fully supported us with concrete actions, not in words, supported Ukraine, especially our internally displaced persons who left … We will not forget this,” he said.

During a conversation with the Ambassador of Belgium, Zelensky thanked the people, the leadership and, in particular, the prime minister of this country for supporting the sovereignty and territorial integrity of Ukraine. He expressed hope that Belgium, together with other European partners, will actively join the restoration of Ukraine.

Congratulating the Ambassador of Spain, the head of state thanked the government of this country for providing humanitarian and defense assistance, and also highly appreciated Spain’s support for the second Crimean Platform Summit, noting the importance of Prime Minister Pedro Sanchez’s participation in it.

Recall that in July Zelensky fired five ambassadors. Among the dismissed diplomats was the Ukrainian ambassador to Germany, Andriy Melnyk, known for his scandalous statements.