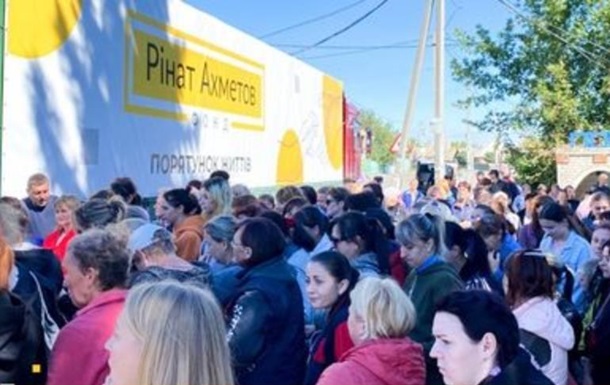 Food packages were distributed in the recently liberated settlements of the Svyatogorsk and Liman communities.

To Donetsk region delivered party of humanitarian aid of the Rinat Akhmetov Foundation. Food packages will be distributed both in the recently liberated settlements and in those that are shelled daily but have not been occupied.

Three trucks from the Foundation brought kits with essentials. They were distributed to the residents of the recently liberated settlements of the Svyatogorsk and Liman communities.

“I want to thank Rinat Leonidovich. Since 2014, we, Donetsk residents, have never been bypassed by his help. I am grateful for tears. I bow low to him,” Lyubov Marchenko, a resident of Sloviansk, thanked for his help.

In total, since the beginning of the war, the Akhmetov Foundation has already donated more than 100,000 kits for residents of the Donetsk region and those temporarily evacuated from the region.

In general, the residents of Ukraine will be given half a million sets of food from the Fund.

Since the beginning of the war, Akhmetov’s enterprises, his charitable foundation and FC Shakhtar have donated UAH 3 billion to help the Armed Forces of Ukraine and war-affected citizens.

Reznikov showed the best response to the annexation

In Tajikistan, the former general of the border troops was sentenced to life in prison. He was detained after protests in Khorog